The heartbroken father of an 11-month-old boy who died in a car crash in Los Angeles last week has called for justice – while sobbing, “I’ll never see him again.”

Devastated Luis Quintero has spoken out after little Alonzo tragically died from the reckless behavior of mentally ill intensive care nurse Nicole Lorraine Linton, 37, who plowed her Mercedes into a busy intersection at 90mph and killed six people.

Quintero held back his tears and told ABC7 how his son had a smile.that would brighten your day no matter what.’

“He was full of joy, very excited. I loved it when he grabbed his hands when he was kicking his legs with excitement,” he said.

Alonzo was in a car with his eight-months-pregnant mother Asherey Ryan, 23, on Thursday when Linton blew a red light and slammed into a wall of intersecting traffic.

“I want to see justice done. Something for her, revenge for what she did. Maybe then I can forgive her. But not now,” said Quintero, tears streaming down his face. ‘She took my son away from me. And I’ll never see him.”

Also killed in the car was Asherey’s friend Reynold Lester, the father of the unborn child.

Linton is in custody on six counts of murder. On Monday, her lawyer in court said she had a “profound” history of mental health problems. 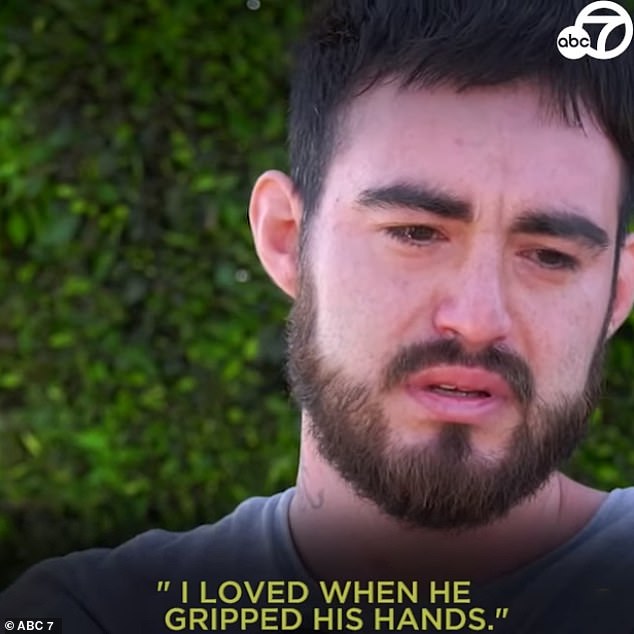 Linton’s attorney said her mental health contributed to the crash and asked that her arraignment be delayed until October.

She had no drugs or alcohol in her system, and her motive for running a red light and plowing through the intersection remains unclear.

Prosecutors also revealed in court that Linton was involved in 13 previous traffic accidents, including one in 2020 that totaled two vehicles.

DailyMail.com obtained crash records from two incidents in Texas – one in 2013 and one in 2016.

In both cases, another driver drove into her vehicle.

The California Highway Patrol declined to provide further details about any of the accidents.

Nicole Lorraine Linton, 37, is being held in custody on six counts of murder after Thursday’s accident

Linton ran a red light at 90 mph on August 4 and got into cars at a busy intersection. Six people and an unborn child were killed

It remains unclear why Linton was able to work in the healthcare system, let alone in the ICU, with the extensive mental health issues described by her attorney. She has held no fewer than six nursing jobs in five states over the past two years.

A native of Houston, Texas, Linton was a Los Angeles contractor at Kaiser Permanente West Los Angeles Hospital. She worked for the nursing group AMN Healthcare, which she joined in October 2020.

AMN Healthcare did not immediately respond to inquiries about Linton’s credentials on Tuesday.

By 2009, Linton worked as a sales executive for General Motors, according to her LinkedIn profile. She began working as an “external” in healthcare at NYU in 2010, although she did not complete her nursing degree in 2015.

Victims: Asherey Ryan, 23, died in the fiery crash with her one-year-old child and unborn child. Honors poured in for the mother, who was expecting another child this year. This child’s father was Reynold Lester (right), who was also killed

Authorities are investigating the damage from Thursday’s fatal wreckage. Nicole Lorraine Linton, 37, plowed her Mercedes into a traffic wall at 140 km/h

Asherey, Renald and little Alonzo were on their way to a doctor’s appointment for a pregnancy test when Linton crashed into the car they were in. Her car was split in two on impact.

“A young family was destroyed in the blink of an eye,” Los Angeles District Attorney George Gascón said Monday.

“There is catastrophic damage to the families and friends of those killed and injured.

“It is a tremendous loss not only to their families, but to our entire community who learned of this incredible tragedy and saw the now viral video of the collision.”

Two other women remain unknown. No one from Linton’s family has spoken out so far.