Last week, Charlotte Kirby, 25, released a video that tearfully revealed two men entering her while she was trying on outfits in a unisex fitting room at Primark in Cambridge.

Now an investigation by Mail on Sunday has found her ordeal to be common, uncovering repeated problems at M&S ​​and competing chains with no gender-sensitive sections. 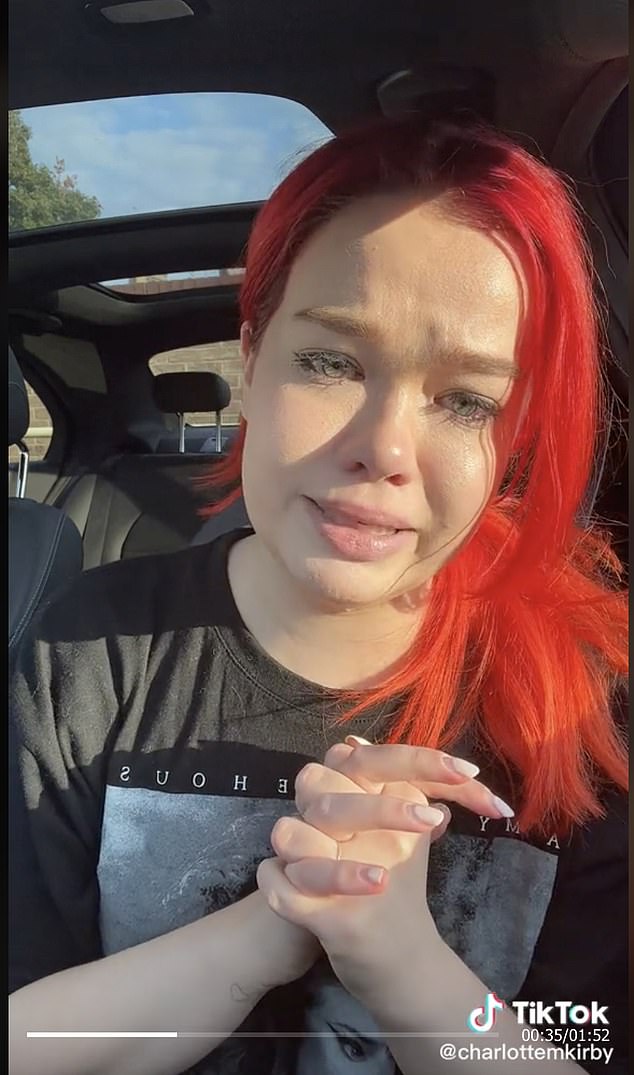 One mother said that as she was taking her teenage girl to M&S for her first bras, she encountered a man coming out of a stall with his testicles exposed.

Another mum tweeted how at another M&S store in Exeter, a man left his cubicle door open in the “gender-neutral” fitting rooms, exposing himself while trying on trousers without underwear.

A woman complained and the man was then escorted outside amid protests.

Another mum said she banned her 13-year-old daughter from shopping for clothes alone after discovering her local H&M only offers unisex fitting rooms.

On Mumsnet, a woman shared how she was secretly filmed in a unisex dressing room.

This year, a Met cop was given a suspended sentence for secretly filming a woman in a Primark dressing room.

H&M, John Lewis, M&S, Monsoon and Primark are no longer offering women-only rooms after transgender activists called for unisex dressing rooms – despite a poll showing 98 per cent of the public wanted single-sex rooms.

‘A PERVERT FILMING MY DAUGHTER ACROSS THE TOP OF THE CABIN’

A mother has shared how her 18-year-old daughter was filmed by a pervert in unisex dressing rooms at H&M.

Nicky Dobson told our investigators that the man engaged in a sex act while filming from an adjoining booth at the South of England store.

She said: “My daughter was in a dressing room that was not marked as male or female.

“The cabins had lockable doors, but there were spaces above and below the partitions. I stood a few feet away.

“The man was filming above the booth – he had been standing on a stool to hold his phone over it.

“I’m amazed I couldn’t see it as I was standing right in front of the dressing room. We were not aware at the time but were later informed by the security guard and police that he had performed a sex act in the cabin while viewing footage on his phone.”

She said the current situation “allows predatory men access to the safe spaces of women and girls,” adding in reference to the shops: “Faced with sex offenses on their premises, they continue to ignore a large number of complaints from women.”

Tory MP Miriam Cates said: “Nobody says all men pose a risk, but if you’re a predatory man you now have – literally – an open door for vulnerable women to strip.

“I really hope these big companies realize what they’re doing because it’s not safe.”

Labor MP Rosie Duffield said: “It is totally unacceptable that large retailers are denying women and girls the right to change privately.”

And women’s rights activist Maya Forstater said: “There are men who will take advantage of the opportunities for voyeurism, embarrassment and spying with mobile phones.

“Retailers shouldn’t be afraid to make a clear statement and say no to men who want to undress with women and girls.”

Emma Salmon of Woman’s Place UK added: “Retailers must not override or minimize women’s need to feel safe in public.

“Policies that assert women’s right to privacy and dignity in public spaces must be reintroduced immediately.”

Larger stores would have separate changing areas for women and men.

In smaller stores, men and women would use the same entrance but be directed to separate corridors with cubicles.

In addition, cabin curtains are extended with mechanisms to keep them “firmly in place”.

Nicola Williams of the group Fair Play For Women said: “If Primark still believes that ‘women only’ can include men posing as ‘women’ then their solution is a sham.”

A spokeswoman said: “We strive to be inclusive and we give customers the choice of which fitting room they want to use.”

M&S said: “We have changing rooms in our womenswear and menswear departments and each consists of individual, lockable cubicles to ensure everyone is comfortable and has the privacy they need.

“While they are primarily used by shoppers of this gender, as an inclusive retailer and in line with most other retailers, we give customers the choice of fitting room.”

H&M, John Lewis, M&S, Monsoon and Primark are no longer offering women-only rooms after transgender activists called for unisex dressing rooms – despite a poll showing 98 per cent of the public wanted single-sex rooms. Pictured: A fitting room at Primark

https://www.dailymail.co.uk/news/article-11270459/Feminist-campaigners-demand-unisex-changing-rooms-scrapped-amid-reports-traumatic-encounters.html?ns_mchannel=rss&ns_campaign=1490&ito=1490 Feminist activists are calling for the scrapping of unisex dressing rooms amid reports of traumatic encounters