A filmmaker who met Shamima Begum in a Syrian refugee camp says the teenage former ISIS bride sees herself as a “celebrity” following recent media attention.

Documentary filmmaker Andrew Drury, who has traveled to Syria several times to speak with the 23-year-old, said Begum is a “narcissist” who “sees herself as a victim”.

Begum, who is currently appealing a UK government decision to strip her of British citizenship, originally traveled to Syria when she was 15 to join ISIS.

Earlier this month, the BBC sparked fury when it dedicated a 10-part podcast to the woman accused of sewing bombers into her suicide vests while living in an ISIS-controlled area in the Middle East. 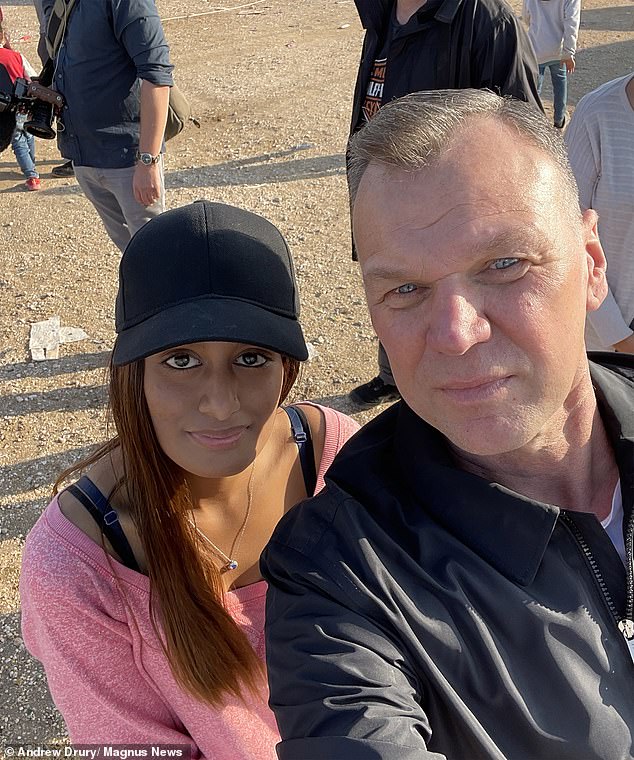 Andrew Drury, pictured here with Shamima Begum in a Syrian refugee camp, says she is a “narcissist”.

Begum, pictured here in leggings and a white t-shirt, has radically changed her appearance since she was first found in Al-Roj camp in Syria

Mr Drury said he was initially taken in by Begum when he first met her, adding that he “felt sorry” for her.

However, last week he was able to see through the character she plays for the cameras.

The Times quotes him as saying: “She sees herself as a victim now, but she made it very clear to me that it was her decision to leave [to Syria] and she left voluntarily

“She’s a narcissist. She wants to be someone. Now she sees herself as a celebrity. Being a part of Isis meant she was someone, and now she is someone again.’

In July last year, Mr Drury said Britain had a responsibility to bring British jihadi brides like Begum and their children “home” because it was not fair to leave them “as a danger to the Syrians and the Kurds” who ” enough” have danger to deal with already”.

But he’s since changed his mind – in September he said he believed Begum was a “manipulative personality playing the victim card to get back to the UK”.

He told The Sun at the time: “After extensive face-to-face meetings and a lot of bizarre text messages, I’m convinced she’s a bitter, twisted character with deep psychological issues.”

Mr Drury said he was “devastated” when she told him the death of her three children no longer saddened her and that she had “moved on”.

This, he said, was beginning to change his view that Begum is a victim.

Mr Drury, who has written a book about his experiences traveling abroad for work called Trip Hazard, said she did not mention she was “trafficking or caring” when they first met.

He claims she’s trying to “create a character” that will allow her to return to the UK.

Whether she will be allowed back to the UK depends on the decision of a special commission on immigration appeals investigating her claims that she was wrongly stripped of her citizenship.

Begum claims she was trafficked after traveling to Syria with two friends when she was 15, with the help of a spy working for Canadian intelligence.

The ISIS bride gave birth to three children after joining ISIS, none of whom have survived. Pictured: Begum with her one-week-old son Jerah

While in Syria, she was married to Yago Rieddijk, a Dutch Muslim convert who was eight years her senior.

Four years later she was found in a Syrian refugee camp pregnant with her third child – her first two had died of malnutrition-related diseases and her third would also die soon after birth.

It has been claimed that Begum acted as an enforcer for ISIS’s strict Sharia lifestyle, even sewing vests for suicide bombers before their attacks – she denies this.

In her first interview after she was found, she sparked outrage after claiming “seeing my first severed head in a trash can didn’t bother me at all”.

Should Britain take back Begum?

The Home Office says Begum knew what she was getting into when she joined ISIS, but her lawyers argue she was a victim of human trafficking and sexual exploitation.

Her family’s attorney, Tasnime Akunjee, told the Times: “The court of public opinion is not part of my jurisdiction.

“If she was acting under the terms of the Modern Slavery Act and the Home Secretary did not intend this, was the decision to strip her of her citizenship valid?”

A Home Office spokesman said: “The Government’s priority remains maintaining the security of the UK. It would be inappropriate to comment further while the court case is ongoing.’

The BBC sparked fury earlier this month after releasing a podcast series with Begum in which she defended her actions.

On the show, titled “I’m Not A Monster,” Begum said, “I’ve always been a more reclusive person … I’m not a person who draws a lot of attention.”

In the series, she described crossing the border into Syria as “easy” and recounted her trip with her school friends Amira Abase, also 15, and Kadiza Sultana, 16.

It is understood that the BBC did not pay her any money for her participation in the series.

However, critics claim that the company shouldn’t give her the “oxygen” of publicity, fearing it would allow her to “spin” a “sob story” and use it as a PR opportunity.

Campaign group TaxPayers’ Alliance said in a social media post that BBC royalty money “should not support this shameful PR exercise to further weave the sobbing tale of an Isis bride”.

The BBC said the series was “not a platform for Shamima Begum to tell her unchallenged story” but a “robust investigation of public interest”.

https://www.dailymail.co.uk/news/article-11663109/Filmmaker-met-Shamima-Begum-Syria-brands-narcissist-sees-celebrity.html?ns_mchannel=rss&ns_campaign=1490&ito=1490 Filmmaker who met Shamima Begum in Syria calls her a ‘narcissist’ who ‘sees herself as a celebrity’