A 13-year-old Florida boy who contracted a brain-eating amoeba two months ago while swimming after it floated up his nose has been flown to Chicago for further treatment.

Caleb Ziegelbauer, from Port Charlotte, was flown to Chicago’s Shirley Ryan AbilityLab rehabilitation center on Wednesday and transported by Jet ICU, a company that offers flights for patients who have to travel long distances for treatment.

Exact updates on the teenager’s health status have not been shared. His mother, Jesse Ziegelbauer, said Caleb is “healthy” and has “a brain capable of healing,” but gave no further details about his recovery.

The chance of surviving an infection by the amoeba called Naegleria fowleri is only three percent.

Ziegelbauer contracted the deadly brain infection on July 1 while swimming in Port Charlotte, where a river meets the sea.

Brackish water – where fresh water meets salt water – is known to be a prime location for Naegleria fowleri as it thrives in warm fresh water.

Precious time was wasted after doctors diagnosed him with meningitis, delaying treatment for the amoeba, which needs treatment soon after infection for it to be successful, according to his aunt Katie Chiet and the Centers for Disease Control and Prevention (CDC ). .

The energetic young man who loves the sea came with his parents and sisters for a family trip to the Port Charlotte Beach Complex on July 1 to escape the Florida heat. 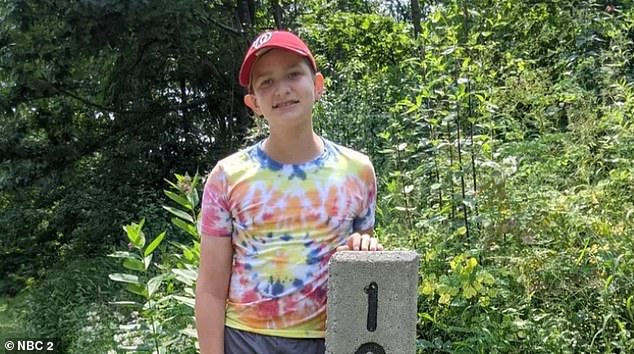 The parasite can thrive in areas like Port Charlotte Beach, which lies at the junction of the freshwater Peace River and the saltwater from the Gulf of Mexico

Port Charlotte Beach is where the freshwater Pearl River and the saltwater Gulf of Mexico meet. Naegleria fowleri can thrive there

Ziegelbauer was flown to the Shirley Ryan Abilitylab in Chicago, a renowned treatment center where clinicians, scientists, innovators and technologists work together in the same room

Five days later, Caleb developed a fever and complained of hallucinations. His parents rushed him to the hospital in Fort Myers, where doctors in the pediatric intensive care unit diagnosed him with meningitis.

“Unfortunately, the amoeba Naegleria fowleri appears to be responsible for his illness,” Chiet said on Caleb’s crowdfunding page.

More than a week after he was hospitalized, doctors finally determined he was suffering from the 97 percent deadly parasite. Only four out of 154 people infected in the US since 1962 have survived.

Caleb’s mother, Jesse, spoke to reporters on the tarmac at Signature Flight Airport in Tampa, from where Caleb flew to Chicago.

“Caleb has a brain that can heal. And now let’s do the next best thing. We will not go into the last two months. We’re moving forward. We continue to heal,” she said through tears.

“Jet ICU will not allow a few hour flight to Chicago to derail his recovery,” he said.

A 2018 study published in the journal Science of the Total Environment found that Naegleria fowleri can survive in the brackish waters of Louisiana’s Lake Pontchartrain, an estuary like the Port Charlotte beach area.

Suitcases aren’t just reserved for lakes and rivers either. Improper water treatment in pools, private ponds, and even tap water can also lead to deadly exposure to the amoeba — which has led to several child deaths in recent years.

Caleb’s mother says there was no other place he could have contracted the parasite and no one else in the family was infected.

Caleb Ziegelbauer, 13, (center) of Port Charlotte, Fla., was infected by a brain-eating amoeba on July 1

Infections are rare in the US; Only 31 infections have been reported in the past 10 years, most of them from recreational swimming. The amoeba is found in most bodies of water, but it’s still unclear why infection is rare, according to the CDC.

The inflammation in Caleb’s brain has only gotten worse. The parasite normally kills its host within 17 days, but Caleb has now survived two months.

After a person is exposed to the amoeba, they are likely to experience symptoms such as headaches, nausea, and fatigue within the next one to nine days. Once symptoms begin, death almost always occurs within five days.

Once symptoms reach the second stage, a person will begin to experience severe neurological problems, such as seizures. A doctor will then likely learn about the infection through a spinal fluid test.

By this point, a person has likely already experienced symptoms so severe that death is almost guaranteed.

The CDC said there is no rapid, standardized test to detect the parasite.

Federal health officials said that posting signs where cases have been closed “could lead to the misconception that unsigned bodies of water or unmarked areas within a designated body of water are free of Naegleria fowleri.”

In 2020, a six-year-old boy in Texas died after being exposed by the water supply in his hometown of Lake Jackson.

Last year, a three-year-old in the state died after being exposed to the brain-eating amoeba at a spray park. His family later sued for negligence, saying operators should have taken better care to disinfect the water.

A North Carolina child, whose age was not disclosed, died last year after being exposed to an improperly disinfected private pond.

https://www.dailymail.co.uk/news/article-11170289/Florida-boy-13-contracted-brain-eating-amoeba-swam-NOSE-flown-Chicago.html?ns_mchannel=rss&ns_campaign=1490&ito=1490 Florida boy, 13, who contracted a brain-eating amoeba after it swam up his NOSE is flown to Chicago