A notable Pizza Hut commercial filmed in 1998 and starring Mikhail Gorbachev has resurfaced following the death of the former USSR leader yesterday at the age of 91.

Gorbachev was an incredibly liberal and amiable politician whose policies of “glasnost” (openness) and “perestroika” (reconstruction) helped end the Cold War and usher in much-needed democratic and economic reforms in Russia.

But such radical changes unleashed forces beyond his control, and struggles between hardliners eager to preserve centralized power and separatists determined to dismantle it hastened the complete collapse of the Soviet Union in 1991.

Six years later, in 1997, Gorbachev shot an advertisement for the American pizza maker – one of many Western companies that were able to gain a foothold in Russia in the years following the collapse of the USSR, thanks largely to the former leader’s policies.

The end result was used in schools and universities around the world to illustrate the dramatic economic changes that followed the collapse of the Soviet Union and showed how Gorbachev, despite his enduring communist ideals, was willing to open up Russia to the world. 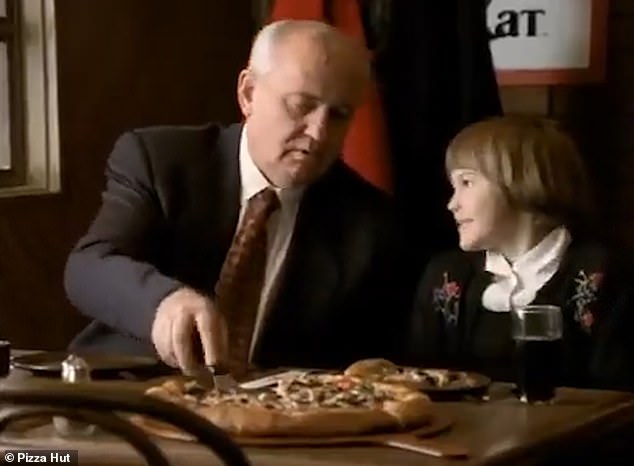 They are interrupted by an older woman who says, “Because [Gorbachev] we have many things… like Pizza Hut!’

Customers find common ground and stand up to toss pizza slices like wine glasses and toast the leader, who sits in the corner and smiles back as they sing his praises

Gorbachev addresses a group of 150 businessmen in San Francisco on June 5, 1990

The ad begins with Gorbachev walking through Moscow’s famous Red Square with his granddaughter Anastasia Virganskaya and entering a Pizza Hut, where other customers are quick to notice his arrival.

“That’s Gorbachev!” shouts one critic. ‘Because of him we have economic confusion!’

The remark is contradicted by another diner, who says, “Because of him we have an opportunity!”

The dispute quickly escalates, with Gorbachev’s detractors accusing him of causing “political instability” and “utter chaos,” while his supporter praises him for introducing “freedom” and “hope.”

Just as the couple seems on the brink of a fight, a woman steps in to declare, “Thanks to him, we have a lot of things…like Pizza Hut!”

After a moment’s thought, the opponents, who had just been at each other’s throats, nod in agreement and break out in a smile.

The critic rises from his table, lifts a slice of pizza and toasts: “To Gorbachev!”.

He is quickly followed by the rest of the guests, who all begin to toast and celebrate the former leader, who smiles humbly in the corner as a cheesy American voiceover sings, “Nothing brings people together like a nice hot pizza from Pizza Hut!”

The amusing yet deeply culturally relevant ad perfectly summed up how many Russians blamed Gorbachev for the collapse of the Soviet Union and an uncomfortable period of rapid socio-economic change, while others hailed him for allowing them the freedom to express opinions and wealth utter – something that most Russians have never experienced before.

The last publicly shared picture of the late Mikhail Gorbachev was published by Russian economist Ruslan Grinberg on July 1, 2022, two months before his death

Ronald Reagan and Gorbachev at the historic 1986 summit in Reykjavik, Iceland

Gorbachev talks to Vladimir Putin at a reception at the Kremlin in Moscow, June 12, 2002

In the years following the collapse of the USSR, Gorbachev, who received the 1990 Nobel Peace Prize for withdrawing Soviet troops from Afghanistan and refusing to order his armies to use force to crush pro-democracy uprisings in communist states in Eastern Europe, entered a second career.

He made several attempts to found a social democratic party, opened a think tank, the Gorbachev Foundation, and was a co-founder of the Novaya Gazeta newspaper, which is still critical of the Kremlin today.

The former Soviet leader agreed to star in the Pizza Hut commercial to raise money for his foundation, although rumor has it his contract included a clause ensuring he wasn’t filmed eating pizza during the commercial.

Gorbachev, who became increasingly frail in later years, expressed concern about rising tensions between Russia and the United States and warned against a return to the Cold War, which he had helped end.

“We must continue on the course we have set. We must ban war once and for all. The most important thing is to abolish nuclear weapons,” he said in 2018.

Senior Russian journalist Alexei Venediktov, who kept in touch with Gorbachev in the weeks leading up to his death, said in late July the former leader was “upset” that his reforms were smashed by tyrannical President Vladimir Putin, who presided for years over an authoritarian and nationalist regime before invading neighboring Ukraine earlier this year.