University of Idaho murder suspect Bryan Kohberger may have been motivated to kill four students due to an ‘incel complex,’ a former FBI investigator claims.

Pete Yachmetz has posited that Kohberger may have been trying to ‘assert some dominance’ when he allegedly stabbed students Kaylee Goncalves, 21, Madison Mogen, 21, Ethan Chapin, 20, and Xana Kernodle, 20, at their off-campus home on November 13.

He noted that Kohberger, 28, had a history of social issues growing up in Pennsylvania — as his former classmates describe him as a troubled, disgruntled young man who didn’t fit in at school.

But Koberger has pleaded not guilty to the quadruple homicide in court, and his former lawyer says the evidence against him is circumstantial. 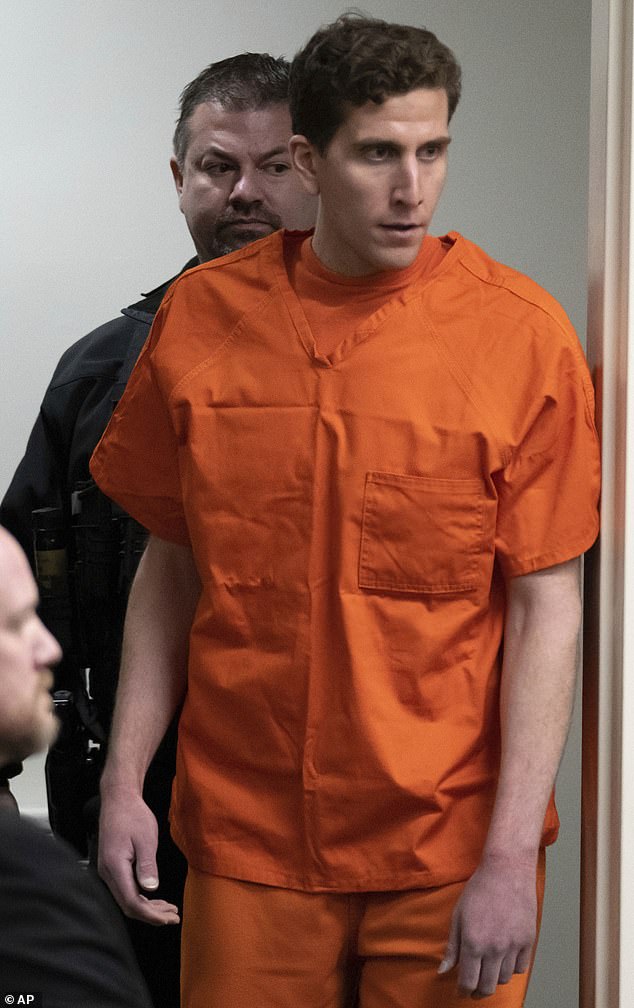 Bryan Kohberger, 28, is accused of fatally stabbing four University of Idaho students at their off-campus house on November 13.

Speaking to the New York Post over the weekend, Yachmetz said he believes the brutality of the murders and Kohberger’s history of social challenges may point to a possible motive.

‘I believe a continued stabbing of a victim indicates … an uncomfortable rage ad extreme anger,’ he said, noting that Kohberger has been descried as ‘socially awkward with a long history of interpersonal problems.

‘I think he may have developed an incel complex,’ Yachmetz said, ‘The murders may have ben an effort to assert some type of dominance.’

The term ‘incel’ — short for ‘involuntarily celibate — refers to men who have trouble establishing romantic relationships.

It is associated with misogynistic online tendencies and sometimes even crime, with Psychology Today reporting last year that men who identify as ‘incels’ tend have poor mental health and are more likely to experience feelings of victimhood, inferiority and loneliness.’

‘I’ve been saying from the beginning that he’s an incel,’ she said in an interview with CourtTV last week.

She explained she was largely convinced due to Kohberger’s alleged ‘choice of victims,’ apparently targeting mostly female college students.

Additionally, Lieberman said, she was intrigued by evidence showing he returned to the scene just hours after the students were slain.

‘Incels like to be known for when they kill people, or when they have a conquest like this,’ she said. ‘On the one hand, he wanted to commit the perfect crime and not be caught, but on the other hand, he did want to be caught and be proud, in a sense of what he did.’

Kohberger is charged with the murder of Kaylee Goncalves, 21, Maddie Mogen, 21, Ethan Chapin, 20, and Xana Kernodle, 20

Former classmates of Kohberger’s have told in recent weeks how he was a bullied, overweight kid who changed after high school.

Kim Kenley, 27, said the suspect developed a crush and began romantically pursuing the girl who would go on to be a high school cheerleader.

Kohberger, then a chubby, awkward misfit, would become relentless in his pursuit, repeatedly leaving love letters in her locker and telling her he liked her, according to the mom.

Kenely would eventually tell Kohberger to buzz off, breaking his heart

At the time, former classmates said, Kohberger was heavy-set and the subject of bullying and cruel taunts.

‘The whole clique of popular girls made fun of him in school. They were the cheerleaders and the ones that every kid had crushes on,’ another classmate who did not wish to be identified told DailyMail.com.

‘They literally tortured him, girls started making fun of him in middle school.’

But Kohberger seemed to turn his life around in high school, where he took up boxing and lost weight.

‘He was a totally different person. He worked out constantly and was super aggressive,’ the male friend said.

‘He had a short fuse and was constantly trying to change his style and personality to fit in with cliques.’

A third former classmate added: ‘It’s interesting to me that the girls he’s accused of killing were nice looking and seemingly popular, much like the ones that made fun of him throughout his childhood.’

In a yearbook photo, Kohberger’s caption said he aspired to be an Army Ranger. Previously overweight and bullied, he lost about 100 pounds and transformed into a ‘totally different person’

Kohberger attended Pleasant Valley Intermediate School in Brodheadsville, Pennsylvania, where he developed a crush on fellow student Kenely and began pursuing her romantically. They are both pictured in their school yearbook photos

Casey Arntz, who attended high school with Kohberger, also said he used to get her to drive around his home area in search of drugs.

Her brother Thomas said Kohberger would try to bully others to distract from his own weight problem.

‘He was mean-spirited, he was a bully. I never thought he would do something like that but at the same time it doesn’t really surprise me,’ Thomas said.

Meanwhile, a woman called Hayley posted a TikTok video saying she had been on a Tinder date with Kohberger about seven years ago.

After going to watch a movie, they went back to her dorm room and watched TV, and Kohberger kept trying to touch her, she said.

She proceeded to ask him why he was touching her, which caused him to get ‘super serious,’ she said.

‘You are though,’ she recalls retorting, saying then that Kohberger was attempting to ‘gaslight me into thinking that he didn’t touch me, which is weird.’

She clarified that she did not feel in danger and wasn’t ‘scared of him,’ but did want him to leave after a time, which led her to pretend to throw up in the dorm hall’s bathroom.

She then claimed Kohberger followed her to the bathroom and ‘stood outside the door,’ which she also thought was ‘weird.’

But the vomiting incident seemed to work and Kohberger left. Hayley said she was glad she never saw him again.

Now, Kohberger’s former attorney says all the evidence linking him to the murder of the four University of Idaho students is circumstantial.

Chief Public Defender for Monroe County, Pennsylvania, Jason LaBar, was court-appointed to Kohberger before the alleged murderer was extradited to Idaho and hired a private attorney.

Speaking to Law&Crime Sidebar podcast host, Angenette Levy, LaBar eviscerated the probable cause affidavit explaining that the evidence is not ‘clear-cut.’

The Pennsylvania public defender’s comments on the knife sheath, which was found next to one of the victims featuring Kohberger’s DNA on the button snap was shrugged off by LaBar as ‘touch DNA’ or ‘transfer DNA.’

‘Which would mean that it could remain on that sheath for an indefinite period of time, if undisturbed,’ he explained.

‘That’s one way of attacking that type of evidence that doesn’t put him at the scene of the crime the night out, just that he merely touched that sheath at some point in time.’

LaBar said there is no other direct evidence linking Kohberger to the fatal stabbings, noting that even the suspected white Hyundai Elantra, which was allegedly seen at the victims’ off-campus house before and during the supposed time of the murders, appears circumstantial.

And, he said, police used cellphone tower pings rather than GPS location to put him at the scene 12 times before the quadruple homicides.

‘If it was GPS location coordinates, you’re talking down to a meter as to where Bryan Kohberger was at the time of these crimes,’ he said.

‘Whereas a cellphone tower ping is that you’re within a radius of that tower up to 20 miles.

‘Obviously, Mr. Kohberger lived within ten miles of the University of Idaho where these crimes were committed. So certainly he could ping at any moment in time near the actual crime.’

The fact that one of the surviving roommates, Dylan Mortensen, is reported to have spotted Kohberger in the house the night of the murders is something LaBar believes can be contested.

‘I don’t believe hearsay is admissible in Idaho under the rules,’ LaBar said.

‘Cross-examination of her is going to be key in the case to possibly get even more holes as far as the identification is concerned.’

Chief Public Defender for Monroe County, PA, Jason LaBar, was court-appointed to Kohberger before the alleged murderer was extradited to Idaho and hired a private attorney. LaBar has shrugged off evidence from the bombshell probable cause affidavit released last week

LaBar said he spoke with Kohberger over the course of the five days that he had been his attorney for about four hours in total and described him as ‘engaged.’

During that time, Kohberger told LeBar that he believed he would be ‘exonerated’ once he was transferred to Idaho.

‘He was aware of what plans I had, and he was good with everything that I laid out for him, including the statement,’ he said.

‘The statement of him being exonerated implicitly meant that he was innocent of the crimes. He used the word exonerated.’

However, ‘we’re just in the infancy of the case,’ LaBar mused.

More evidence is expected after the preliminary hearing, and while he’s no longer representing Kohberger and has no plans to communicate with him, LaBar will be following the case and ‘viewing everything objectively.’

‘I know I’ve been stressing since my representation of Bryan that he’s entitled to a fair trial,’ LaBar said.

‘And really, that’s why I’m trying to be a voice for him so people don’t jump to conclusions and raise these biases so that he can actually have a fair trial with the presumption of innocence.’

The 28-year-old will return to court in Moscow on June 26 – six months from now – for a preliminary hearing.