Former Masters champion Yan Bingtao is among 10 players charged by the snooker board as an investigation into alleged match-fixing continues.

Yan was one of 10 Chinese players banned from the World Snooker Tour earlier this month.

The World Professional Billiards and Snooker Association (WPBSA) has confirmed that Yan and the nine other players “have a case to answer” for alleged rule violations. 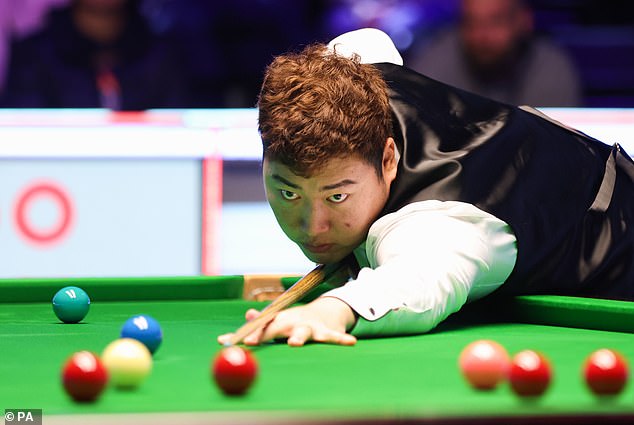 Yan Bingtao is among 10 Chinese players charged with match-fixing

Yan was accused of fixing matches on the World Snooker Tour and betting on snooker in violation of WPBSA regulations.

Lu Ning faces the additional charges of “concern with fixing games and approaching a player to fix a game on the World Snooker Tour, trying to obstruct investigations and betting on snooker games”. .

Zhang Jiankang was also accused of “failing to report any approach to him to fix games and bet on snooker games”.

World No. 9 Zhao Xintong is the highest-ranking player to be charged

World No. 9 Zhao Xintong, 25, a winner of two ranking events including the 2021 UK Championship, has been accused of worrying about rigging games and betting on snooker.

Liang Wenbo, the 2016 English Open winner, was the first to be banned in October.

He was accused of “concerns about fixing games and reaching out to players to fix games on the World Snooker Tour, obstructing investigations and not cooperating with the WPBSA investigation”.

Li Hang was also accused of “concerned about fixing games and reaching out to players to fix games on the World Snooker Tour to hamper investigations and bet on snooker games”.

Bai Langning faces charges of “concerning the manipulation of a game on the World Snooker Tour”.

The WPBSA said the charges followed a detailed investigation by the organization’s integrity department, which worked closely with Sportradar, a sports technology company that monitors betting.

“Players are currently suspended from attending and participating in the World Snooker Tour and other events governed by the WPBSA pending the completion of the hearing or hearings and determination of this matter,” the WPBSA said in a statement.

“This matter will be submitted to a formal hearing before an independent disciplinary tribunal, at a place and date to be confirmed.”

The investigation was launched by the WPBSA in October last year after several of its anti-corruption safeguards were triggered.

It is understood a whistleblowing hotline received information about alleged wrongdoing around the time betting monitors were logging unusual activity in some snooker markets, raising concerns.