Former Monday Night Football host Lisa Guerrero has revealed that during the 2003-2004 season she suffered a miscarriage in the middle of an NFL game being televised live.

Guerrero, who is now an investigative correspondent for the national news magazine Inner EditionIn her new memoir, she shared one of her most painful moments warriorwhich reflects the former model’s only year in sports journalism at ABC two decades ago after taking over from Melissa Stark.

The memoir is slated to hit stores on January 24. In it, she alleges that she received unfair criticism from then-pro athletes and from her ex-boss, executive sports producer Fred Gaudelli, who now provides NFL coverage for Amazon Prime Video. 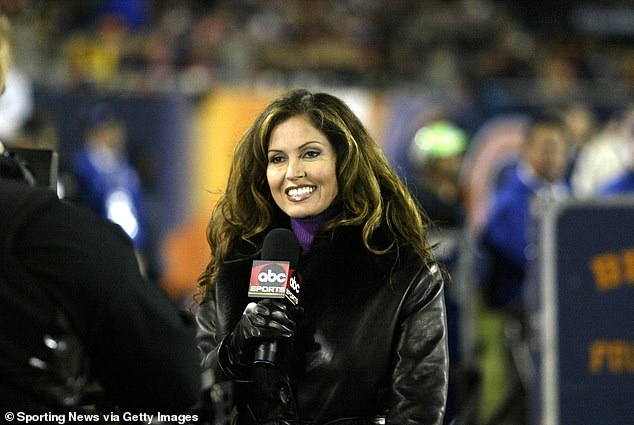 Guerrero, an investigative reporter for Inside Edition, reveals her trauma in her new memoir

Guerrero also claimed Gaudelli was part of the trolls among ABC’s weekly audience of 40 million people, who constantly criticized her looks, demeanor and on-air skills.

She also claimed that he frequently made insensitive comments that brought the sports reporter almost to the point of contemplating suicide.

Gaudelli has previously denied similar allegations by Guerrero, claiming in a 2021 statement to the New York Post that he “did his best to support and encourage her.”

At the time, Guerrero and her fiancé, former MLB pitcher Scott Erickson, were “fantasizing about what our baby would be like,” despite agreeing not to have children.

Guerrero and Erickson had become pregnant during the season and the mounting pressure eventually came to a head.

Guerrero has been married to former MLB pitcher Scott Erickson since 2004. Pictured in 2015

Gaudelli (left, with Al Michaels and Cris Collinsworth) has worked for NBC Sports and ESPN

“I asserted myself and wrote my reports,” Guerrero wrote in an excerpt first obtained by PEOPLE, recalling suddenly experiencing an increasing pain in her abdomen during the first half of an MNF game late in the season felt.

“As I felt a wetness between my legs, I thought, ‘Oh, I got my period.’ And then I remembered I was pregnant. I had a miscarriage! I could feel blood seeping out. The official toilet was in the tunnel behind me. “I’m going to the bathroom,” I said to my assistant, whose job it was to race across the field with me. He looked at me like I was crazy. “They’re about to throw to you.”

The Chicago native, then about 38, listened to her assistant’s advice and stayed on the air to deliver her live report for fear of being berated by Gaudelli later.

“I was dizzy and nauseous, but remembered to stand up straight. During our Wednesday phone calls, Freddie checked me for poor posture. The pain was excruciating. I overheard a player’s name being mispronounced and knew I would find out about it later. As soon as I was done, I ran to interview a trainer. Then I went to the bathroom. As I sat on the toilet, I couldn’t believe the blood spurting out of me. It was soaked through my pants. I put some paper towels in my underwear.”

She said it “never occurred to her” to tell anyone or go to the hospital, and instead considered ways to cover the blood with her coat.

“After the end of the game I should go to the production truck and talk to Freddie. Instead I went to the plane. In the bathroom [on board]I changed my clothes and threw my underwear and pants in the bin. I looked in the mirror and didn’t recognize the pale, gaunt, frightened and so very tired woman staring at me.’

Guerrero claims to have kept the trauma to herself for the next 20 years as she didn’t tell anyone about the miscarriage and finished work for the night before heading to the airport.

“I don’t blame anyone for this,” Guerrero told People. She was eventually released from MNF after the conclusion of the 2003-2004 season.

Guerrero added that she wants people to know that constant bullying and trolling affects people in all sorts of ways in everyday life.