By Kathryn Batte for Mailonline

Over the days in the office, this has been worse than ‘bad’ for Fulham boss Marco Silva.

Goals from Callum Wilson, Longstaff and a brace from Miguel Almiron sealed a 4-1 win, the Magpies’ first away win of the season. A late consolation from Bobby Decordova-Reid did little to lift Fulham’s spirits. 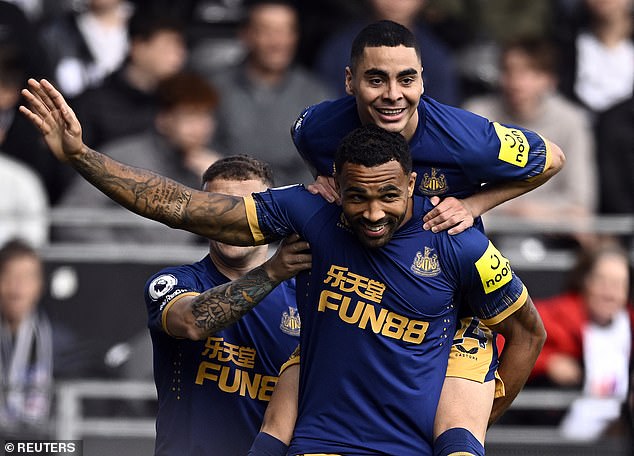 The goal line would have been taller had it not been for Bernd Leno, who was the only Fulham player to leave the pitch on a loan. Silva’s side didn’t get a shot on target until the 88th minute and looked defeated from the moment Chalobah left the field.

The midfielder flew into a tackle in the eighth minute, missing the entire ball and catching Longstaff with his studs. Referee Darren England initially gave a yellow card but after a VAR review the decision was changed to red.

That’s right. It was a reckless, potentially dangerous tackle that could have seriously injured Longstaff. The Newcastle midfielder escaped unscathed but Fulham did not. It was just three minutes between Chalobah’s red card and the opening goal.

Before kick-off the focus was on Aleksandr Mitrovic and whether he would continue his good form against his old club. It wasn’t his day and a worsening of an ankle injury sustained on international duty meant he was withdrawn in the 36th minute. Instead, another frontman celebrated.

Wilson, who returned from a five-week injury layoff, should have put Newcastle ahead in the fourth minute when he sent a shot against the post from five yards out. But he was in the right place at the right time to finish asking the second time around.

Kieran Trippier’s cross at the back post was headed over the goal by Joe Willock and the striker jabbed the ball over the line to score against Fulham for the fourth time in the Premier League.

Chalobah’s tackle received a red card after a VAR check from the referee, leaving Fulham with ten men for most of the afternoon

Wilson could have scored a hat-trick up until the half-hour when he curled a shot just over the bar from inside the box. But Newcastle didn’t have to wait a second longer.

Almiron is often criticized for missing the easy chances, but his 33rd-minute volley was an early contender for goal of the season.

With a quick free-kick, Bruno Guimaraes flicked the ball past Layvin Kurzawa to Almiron, who threw a superb left-footed volley into the top corner.

Fulham could barely string a pass together as Newcastle continued to attack in numbers. Leno did well to deflect a shot from Willock before coming down to save a hit from Jacob Murphy. However, the Magpies eventually scored a third from the resulting corner.

Leno had made a great fingertip to pin Dan Burn’s header to the crossbar, but an unmarked longstaff was there to slam the rebound home.

There was still time before half-time for Fulham to make matters worse as Kurzawa had to be substituted through injury. The hosts failed to get a single shot in the first half, but things didn’t get much better after the break.

Murphy should have made it 4-0 when he stepped in at the back post, but Leno made another excellent save to ward off the winger’s attempt.

Almiron thought he had scored his hat-trick when he smashed the ball into the top corner after being passed through by Elliot Anderson, but the winger was rightfully sidelined.

His inch-perfect cross hit an unmarked De Cordova-Reid at the back post and he went past Nick Pope. Ryan Fraser thought he had scored a fifth goal for the visitors in added time but the substitute was correctly ruled offside.