Dark clouds hung over the Wynnum Manly Leagues club in Brisbane as mourners arrived for the memorial service for NRL great Paul Green on Tuesday morning.

The 49-year-old manager was found unresponsive at his home in Wynnum, east Brisbane on August 11. Police said there were no suspicious circumstances. He was 49. 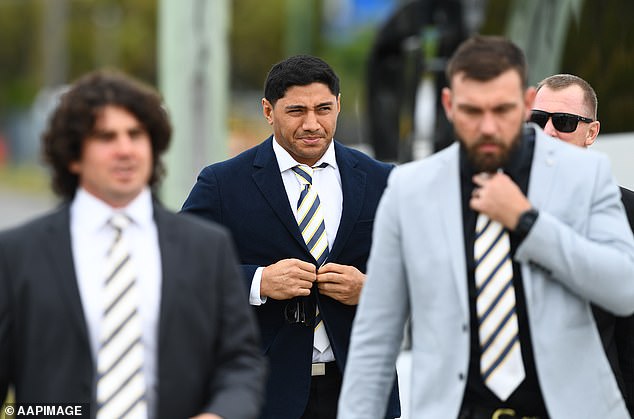 North Queensland stars (left to right) Jake Granville, Jason Taumalolo and Kyle Feldt arrive at the funeral. They all won the 2015 Grand Final under Green’s coaching

Mourners were greeted by a portrait of Green flanked by Queensland and Cowboys jerseys. During his distinguished career, he played and coached for both teams

Autographed Queensland and Cowboys jerseys were placed on either side of a black and white portrait of Green for the ceremony. During his distinguished career, he played and coached for both teams.

Green played for Wynnum Manly from juniors until he made it to first grade and won two Premierships as manager of the Seagulls.

During his storied playing career, the little halfback played 162 NRL matches, mostly for Cronulla, as well as 10 matches for Queensland and three Tests for Australia.

He also received the Rothmans Medal (now known as Dally M) for the league’s best player in 1995, although it was only his second season at the top level.

After the private service, a public memorial service will be held on the field at the team’s home stadium, Kougari Oval.

Green is survived by his wife Amanda and children Jed and Emerson.