The furious French star accuses the referee of being a LIAR in violent blast over a highly controversial call – as he branded the Australian Open official the ‘worst he’s dealt with in 20 years’.

Seething French star Jeremy Chardy could face sanctions from tournament officials at the Australian Open after he branded chair umpire Miriam Bley a liar and the “worst thing he’s dealt with in 20 years”.

Chardy, 35, was furious after Bley called in the first set of his second-round match against England’s Dan Evans for a final score of 3-3.

Seconds earlier, during a rally, a ball in Chardy’s pocket had fallen out on the pitch and the animated Frenchman then hit the net with the subsequent forehand.

Chardy was furious when the point was awarded to 25th seed Evans despite Bley’s late let call.

The veteran felt the point should have been repeated. 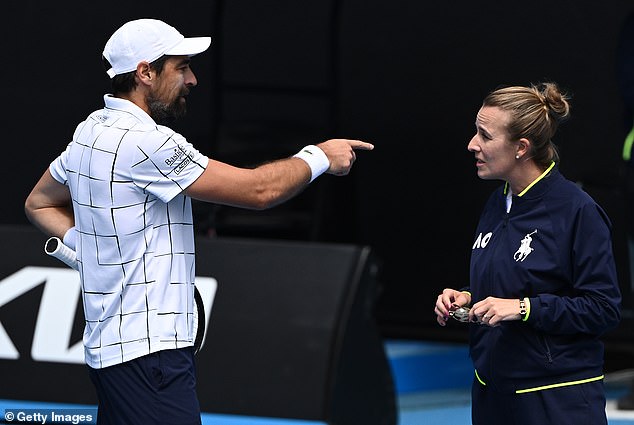 Chardy, 35, felt a point should have been replayed after a ball fell out of his pocket during the rally against England’s Dan Evans

There was a 10 minute delay when Chardy asked Bley if she was looking at the birds rather than the rally.

“I’ve never seen that in my life. I’ve been playing for 20 years and I’ve never had a referee as bad as you. not one. You don’t see a ball,” said the heated Frenchman.

“I hit a forehand there, I walk over there, so it’s like five seconds and you don’t even see it.

“That’s the biggest mistake of the Australian Open.”

Evans, the 25th seed, maintained his composure against Chardy, winning in straight sets 6-4 6-4 6-1 and advancing to the third round

As tension mounted, a tournament director was called and Chardy sensationally accused Bley of “lying”.

“I don’t trust you at all,” Chardy was heard saying.

He then called for their punishment, later calling Bley the “worst (official) he’s dealt with in 20 years.”