Social media platforms including Tiktok and YouTube are profiting from misogynistic influencers who have garnered millions of views amidst the popularity of online personality Andrew Tate.

MailOnline has examined the accounts of influencers who post popular videos offering advice to men on their relationships with women.

One, Robertas Ziogelis, 28, brands himself ‘toxic’ and talks about wanting to put his hand around women’s throats, whilst another, Connor Prankerd, 27, tells men that ‘red flags are turn-ons for women’.

Youtuber Hamza Ahmed has 1.5million subscribers and offers an online course in ‘how to get girls without being weird and creepy’ that he charges £400 for. It promises to help men feel ‘ready to dominate’.

The online personalities have gained followings amid the popularity of the divisive Tate, who was arrested last month on charges of organised crime, human trafficking and rape, claims that he denies.

Campaigners said that until platforms are ‘forced’ to stop promoting misogynistic content, they will carry on. 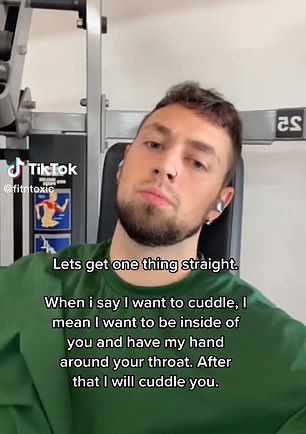 Social media platforms including Tiktok, Youtube and Instagram are hosting misogynistic influencers who have garnered millions of views amidst the popularity of online personality Andrew Tate. Above: Robertas Ziogelis (left), 28, brands himself ‘toxic’ and talks about wanting to put his hand around women’s throats, whilst another, Connor Prankerd (right), 27, tells men that ‘red flags are turn-ons for women’

The online personalities have gained followings amid the popularity of the divisive Tate, who was arrested last week on charges of organised crime, human trafficking and rape

Ziogelis, who is from Peterborough, runs a TikTok page called ‘Fit N Toxic’, where he calls himself ‘Toxic Rob.’

The account has nearly 22,000 followers and one million likes.

One video shows him sitting on some gym equipment as text on the screen says: ‘Let’s get one thing straight.

‘When I say I want to cuddle, I mean I want to be inside of you and have my hand around your throat. After that I will cuddle you.’

Another video tells viewers: ‘So you are the guy who lets his girl have male friends?

‘Then give me her number lil guy, I’ll be a really good friend to her, the best she ever had.’

A clip aimed at women says: ‘Don’t f his best mate, F the guy he hates the most or is most jealous of.’

Ziogelis, who is from Peterborough, runs a TikTok page called ‘Fit N Toxic’, where he calls himself ‘Toxic Rob.’ Above: One of the influencer’s videos

Prankerd, 27, from Caerphilly, Wales, runs a TikTok account called Masculine Empowerment. It has more than 78,000 followers and 2.6million likes

The course offered by Ahmed promises buyers that they will get benefits including ‘endless energy’, and a ‘module’ showing them how to increase their testosterone levels by 30 per cent.

It adds: ‘You’ll feel how a young man is supposed to feel – Energetic, ready to dominate!’

In one video on Youtube, which is titled ‘Chase Pussy’, he says:  ‘You have some f***ed up desires inside of you and those desires are so much stronger than any of this modern day bullshit of ‘I want to help people’.

‘The most common dark desire is of total f***ing dominance over women.

‘Total dominance over other men. Levelling up the social hierarchy by pushing someone else down.

‘This is some dark stuff right, but you have it inside you. Utilise it.’

In another, he tells viewers:  ‘Women will only f*** winners… women f*** that disciplined guy who they can see is elevating his status as much as possible.’

He adds: ‘That time that you spend, when you are not even present, but you went on date just for her.

Another video, released at the start of this month, is titled ‘Why men should not show emotion’. It has had more than 300,000 views since Mr Ahmed published it.

He insists that men should not show vulnerability to their partners, telling viewers : ‘You will open up in front of your girlfriend.

Youtuber Hamza Ahmed has 1.5million subscribers and offers an online course in ‘how to get girls without being weird and creepy’ that he charges £400 for. It promises to help men feel ‘ready to dominate’

‘You will talk about some things, some weaknesses, you’ll complain, and she’ll hold you… and she’ll genuinely feel happy that you have opened up to her.

‘And when it gets extreme she will think of another man f*****g her because a feminine woman always needs a masculine man.’

Prankerd, 27, from Caerphilly, Wales, runs a TikTok account called Masculine Empowerment. It has more than 78,000 followers and 2.6million likes.

He is often seen reading from a book with the mock title: ‘The lost language of the female species.’

‘You’ll see girls all the time make videos about red flags and how they will never avoid them.

‘Reason being it typically comes from a bad boy, which we all know, that’s what girls are attracted to. Red flags are turn ons for women, and that’s all there is to it.

In another, he says: ‘Women should never be the priority of a man’s life. They should only ever be a complement.’

He adds: ‘Women are a by-product of your success.’

Another influencer, Matthew Hyman, 24, from Newcastle, runs an account on Tiktok under his own name. He has nearly 46,000 followers and 1.9million likes. He has a similar account on Youtube that has a much smaller following

A third video sees him tell viewers: ‘When you are dealing with women, make sure that they are not trying to run the show. Just don’t let it happen. Because as soon as you let it happen, it’s over.

‘You are going to be miserable in a relationship, and she is too, because women don’t want to run the show.

‘When you are not the leader, she will end up telling you what to do, lead interactions, but most importantly, she will lose respect for you.

‘Women want to be with a superior, and leadership falls within that. Men lead, women follow.’

Prankerd also runs an online dating course that he charges users £7 for and promotes an ebook with the title ‘Womanese’.

TikTok estimated that it made $12billion (around £9.9billion) in advertising revenue last year. And YouTube’s reported revenue in 2021 was $28.1billion.

Last September, a Daily Mail investigation found how vulnerable teenagers are being bombarded with harmful content on Tiktok, including videos promoting suicide.

And in August there were calls to remove Tate’s videos after it emerged that the self-styled ‘king of toxic masculinity’ had been searched on Google more than Donald Trump or Kim Kardashian.

TIkTok was also this month likened to the addictive drug fentanyl by a US politician for the ‘corrosive impact’ it is having on young Americans.

Another influencer, Matthew Hyman, 24, from Newcastle, runs an account on Tiktok under his own name.

He has nearly 46,000 followers and 1.9million likes. He has a similar account on Youtube that has a much smaller following.

In one video he says: ‘Stop trying to be a friend on dates. You’re not a girl’s friend. You are either her partner or she’s nothing to you.

Ryan Hamblett, who runs a TikTok account with 105,000 followers and three million likes, describes himself as a ‘coach’.

He offers a £37 online course titled ‘The secrets to online dating success’.

It promises customers that they will learn how to ‘discover the highest value women to date’ and ‘how to have ushakable confidence when talking to women.’

It adds: ‘This course will leave you in the position to start having all the romantic success that you truly desire.’

Ryan Hamblett, who runs a TikTok account with 105,000 followers and three million likes, describes himself as a ‘coach’. He offers a £37 online course titled ‘The secrets to online dating success’

He tells viewers in one tiktok video: ‘If you want an easy way to start dating and sleeping with more women, this is what you need to do.

‘You need to start sleeping with and dating more women. When you have this built-in confidence that you can attract women. You give off this natural aura to women that you don’t really give a f***.

‘And this confidence is something that women can simply not turn town.

‘When they see you are a man who is obviously in demand, a man who has obviously been around a bit, they know you are a guy who can potentially show them a good time and you’re not so needy for them.

‘Because you know, if it doesn’t work out with her, then so what? You are seeing someone else tomorrow night.

The charity End Violence Against Women has requested that the Government make changes to the Online Safety Bill to make technology firms accountable for failing to deal with abuse against women.

A spokesman told MailOnline: ‘Many of these videos violate platforms’ own terms and conditions and shouldn’t even be on these sites, let alone be widely amplified.

‘But tech platforms are ultimately profiting from the sharing of this content, so until they are forced to, they won’t stop promoting it.’

They added: ‘Social media companies should be required by law to take comprehensive and systematic action to prevent this content from being uploaded and promoted by its algorithms.

‘Simply taking content down if it is reported is never going to be enough to slow the tide of abuse.’

Mr Hamblett told MailOnline that ‘masculinity is being stripped away’ in today’s society, adding: ‘The truth is, no one really cares abut men’s [sic] mental health other than men who have actually suffered with it before.’

Mr Ziogelis said: ‘I have explained that my channel is satire and videos are just a form of entertainment, they are not educational videos.

‘In addition to that, there are loads of females posting these type of videos as well.

‘Also, more than 2/3 (68%) of my audience are females and if you check the comments section you will notice that it is all females who are commenting under my videos.’

Mr Prankerd, Mr Ahmed and Mr Hyman have been approached for comment.

Will Fortnite Family Guy Get Skins?