Gary Ablett Jr.’s wife Jordan reveals she’s PREGNANT with third child and wishes son Levi a happy birthday: ‘We have another gift on the way’

Gary Ablett Jr.’s wife, Jordan, announced in a touching Instagram post that the couple is pregnant with their third child.

Jordan shared a photo on Instagram on Sunday of her son Levi, who just turned four, holding an ultrasound scan.

“We have another present on the way,” she wrote, sharing a photo of Levi smiling. “Happy Birthday to our big four year old! You are so loved.’ 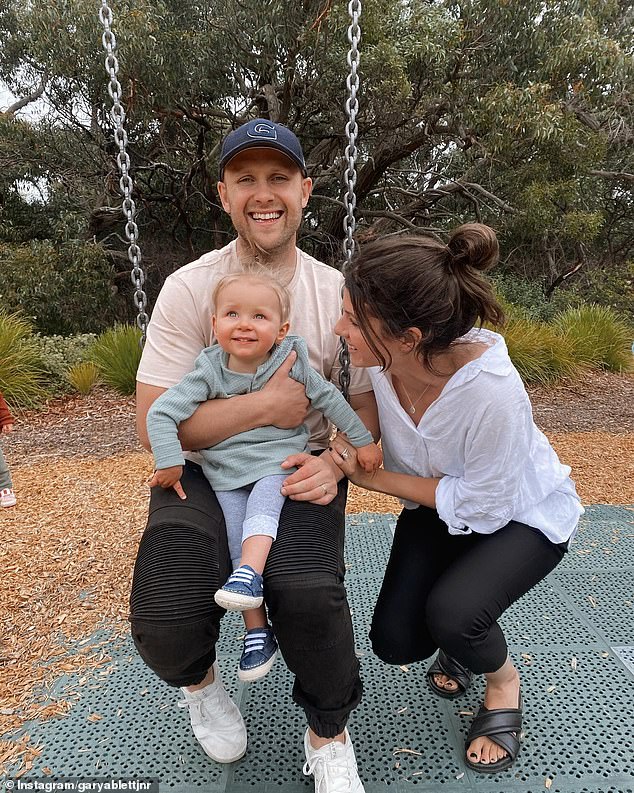 Gary Ablett Jr.’s wife, Jordan, announced the couple are PREGNANT with their third child on Sunday after wishing son Levi a happy birthday. All pictured

The couple was immediately showered with good wishes.

‘Congratulations guys, how nice!!! He looks so happy about it too,” wrote another.

It comes months after Jordan released an update on the health of the couple’s three-year-old son, who is battling a degenerative disease.

Jordan, who didn’t reveal what illness Levi was diagnosed with, revealed in April that it’s unlikely he’ll ever learn to speak.

It comes months after Jordan shared an update on the health of the couple’s son, who is battling a degenerative disease.

“It’s really difficult from a practical point of view, but also really difficult just being your mom and not being able to hear his voice or knowing what he needs,” she told The Herald Sun in an emotional interview.

“If he gets upset, I have to guess what the problem is,” continued Jordan, who has been married to AFL legend Gary since 2016.

“It’s also difficult because I’d love to just hear his thoughts, talk to my boy and know he understands how much we love him.”

Jordan, who didn’t reveal what illness Levi was diagnosed with, revealed in April that it’s unlikely he’ll ever learn to speak

In November, Gary and Jordan announced they had secretly welcomed their daughter, Grace Honor.

“We are over the moon to announce that our precious boy Levi has become a big brother to his own little sister Grace,” Gary wrote on Instagram.

Can YOU spot the snow leopards - even if there is no snow?