‘And it’s live on ITV… well!’: The BBC’s Gary Lineker takes a sly dig at rival broadcasters ahead of England’s round of 16 vs Senegal…stats show the Three Lions have a HORRIBLE record on the channel

Lineker was part of the team of experts that presented the crucial match between the Three Lions and Wales, from which Gareth Southgate’s side emerged victorious after a 3-0 win.

And as he revealed the details for England’s next game – a round of 16 tie with Senegal on Sunday – the pundit couldn’t help but poke fun at an unfortunate stat ITV has. 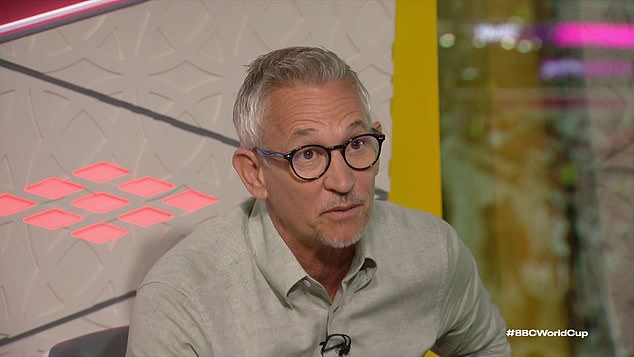 The comment refers to a recent stat showing the Three Lions have an appalling record when shown on the BBC’s rival channel.

England have played 31 games in World Cup history, with 16 going to the BBC and 15 to ITV.

They have won 12 of their games shown on the country’s main channel – a win rate of 75 per cent – compared to just two wins in their ITV appearances.

The worrying stat continues during the World Cup in Qatar, with England failing to win in their only game shown on ITV – a 0-0 draw with USA.

By comparison, they won both games – against Iran and Wales – when they were shown on BBC One this year.

As Lineker clarified, England’s next game will be shown on ITV. It will be their decisive round of 16 game against Senegal, who qualified second in Group A in dramatic fashion.

Gareth Southgate’s side secured a place in the knockout rounds of the World Cup in Qatar after a convincing 3-0 win against Wales on Tuesday night.

Manchester United’s Marcus Rashford stole the show with a brilliant second-half brace, his goals coming from either side of Phil Foden’s shot on goal.

They now meet Aliou Cisses Senegal on Sunday in the first-ever encounter between the two nations on international football.

Meanwhile, Wales were sent home from their first World Cup since 1958 after finishing bottom of Group B by a point.

https://www.dailymail.co.uk/sport/football/article-11483739/Gary-Lineker-takes-sly-dig-ITV-ahead-Englands-round-16-tie-against-Senegal.html?ns_mchannel=rss&ns_campaign=1490&ito=1490 Gary Lineker slyly attacks ITV ahead of England’s Round of 16 v Senegal