Gemma Atkinson has announced that she is pregnant with her second child with Gorka Marquez.

The actress, 38, and the Strictly Come Dancing pro, 32, took to social media to announce they are expecting a boy, who is due later this year.

Gemma said her daughter Mia, three, was “thrilled” by the news and joked that her son would be called “Barbie” if it was her daughter. 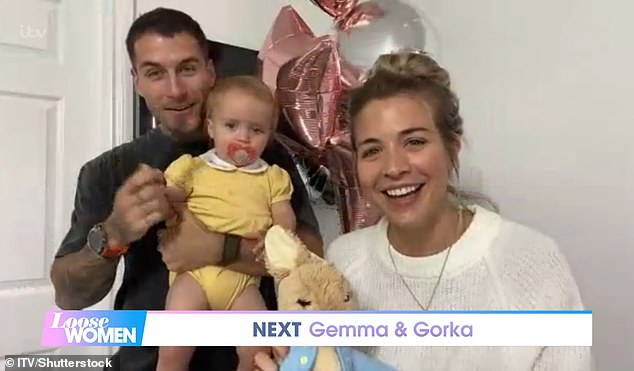 congratulations! Gemma Atkinson has announced she is pregnant with her second child with Gorka Marquez (both pictured with their daughter Mia).

She wrote: “It’s impossible to hide my stomach any longer. I’ve officially “popped”. Our little boy will join our family later this year.

“We feel so incredibly blessed and grateful to be on this journey again. Mia is absolutely thrilled!

“Although we may have to do some naming negotiations as so far she’s adamant his name will be Barbie.”

Gemma and professional dancer Gorka got engaged in February 2021, four years after they met on Strictly Come Dancing. They welcomed their first child Mia on July 4, 2019.

Excited: The actress, 38, and the Strictly Come Dancing pro (pictured 2019), 32, shared they are expecting a baby boy, who is due later this year

Last year, Gemma revealed she has postponed her wedding to Gorka due to her busy schedules – after saying she would rather have another baby than plan a lavish wedding.

Back in May, she opened up about how Gorka has been busy with the Strictly tour schedule for the rest of the year, meaning they won’t be able to accommodate him this year.

She told New Magazine: “Gorka is literally on tour this year. We only have four days off together.

“He’s got the two Strictly tours back-to-back, and then he’s going to continue with Strictly in the fall. We don’t even have a minute to sit down and make plans!’

Funny: Gemma said her daughter Mia, three, was ‘thrilled’ at the news and joked that her son is called ‘Barbie’ when it’s up to her daughter

However, when they finally make it down the aisle, Gemma said they don’t intend to go all out.

“We said we’d rather try for another baby than have a big, fancy wedding,” she said during a recent appearance on Vicky Pattison’s The Secret To podcast.

“Twice we considered going to the registry office and just doing it and then having a big party.”

Family: Gemma and professional dancer Gorka got engaged in February 2021, four years after they met on Strictly Come Dancing. They welcomed their first child Mia on July 4, 2019

She added on the podcast that they would love to have a small wedding abroad but admitted she has made “zero planning” for it so far because of Covid.

Gemma also revealed that she hasn’t chosen her bridesmaids or wedding dress yet.

The mother-of-one, who is currently a presenter at Hits Radio, said she and Gorka have almost gone to the registry office twice now and “just did it” – but added that her family would be upset if they did.

Elsewhere last year, Gemma also opened up about her experiences with post-traumatic stress disorder following the birth of her daughter Mia.

Plans: Last year, Gemma revealed she had postponed her wedding to Gorka (pictured in March 2019) due to her busy schedules – after saying she’d rather try for another baby

In a film for Steph’s Packed Lunches on Channel 4, the Hollyoaks star reflected on her experience giving birth and admitted she blamed herself for “failing”.

Gemma needed an emergency c-section when Mia’s heart rate suddenly dropped during labour. She suffered a hemorrhage after giving birth and lost nearly a liter of blood.

Describing Mia as “the best thing that’s ever happened to me,” Gemma took to social media after giving birth to share her experiences.

Speaking on Channel 4, she said: “All these things were going through my head, what did I do that caused all of this? I kept telling myself for weeks that I failed at the birth.

Open: Last year, Gemma (pictured with Gorka in September 2019) also opened up about her experiences with post-traumatic stress disorder following the birth of her daughter Mia

“I had horrible dreams that someone was going to take Mia away from me. I remember my mother running into my bedroom and I was screaming and sweating.

Gemma said it in the words of her mum, who eventually changed her mind, adding: “We went out with the stroller and one lady said: ‘Oh I believe it [the birth] wasn’t a success, you know what happened?”

‘My mum got on the line and said, ‘It’s been a huge hit, Mia is here, Gemma is here, total success.’ Something clicked inside me, my body made me proud because it recovered and got me through it.’

Gemma also spoke about her plans to have another child, saying: “I’ve gotten to the point where I want Mia to have a sister or a brother. In the first few months of Mia’s life, I kept telling my partner Gorka that I wouldn’t go through that again. I’ve gotten away with it now and I feel like I could.’

Tough times: Speaking for Steph’s packed lunch, the Hollyoaks star (pictured with Gorka in 2018) reflected on her experience with the birth and admitted she blamed herself for the ‘failure’

https://www.dailymail.co.uk/tvshowbiz/article-11660907/Gemma-Atkinson-pregnant-second-child-Gorka-Marquez.html?ns_mchannel=rss&ns_campaign=1490&ito=1490 Gemma Atkinson is pregnant with her second child with Gorka Marquez

Can you spot the women's faces in these optical illusions by artist Lee Wagstaff?