Santos says he is of Ukrainian Jewish descent

In an interview, Santos said his maternal family name was the historically Jewish name “Zabrovsky”.

“My grandfather was born in Kyiv and left in the late 20’s and immigrated to Belgium where he met my grandmother and then started a family,” Santos told Fox Digital in February. “We do not use the Ukrainian surname because many people who are descendants of World War II refugees or Holocaust survivors have changed many names or papers in the name of survival.” 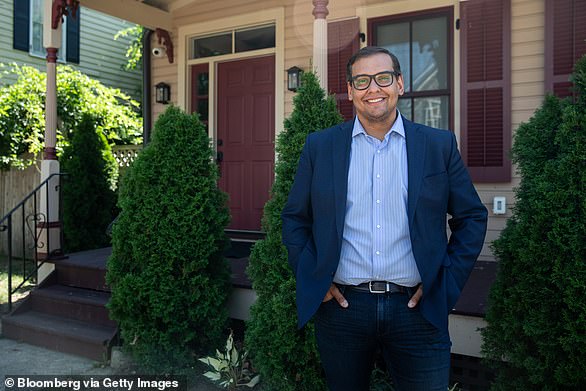 George Santos was exposed as a pathological liar after winning the 2022 midterm election to represent New York’s 3rd congressional district. His lies and fabricated stories cover almost every topic from his educational background to his family heritage

According to Forward, there have reportedly been no successful efforts to find any Jewish or Ukrainian heritage in his family tree.

Santos said in a separate interview in 2020 that he was raised by “a white Caucasian mother, an immigrant from Belgium. But Santos’ mother, Fatima Devolder, was born in Brazil in 2016, according to her obituary.

Additionally, newly surfaced tweets show that Santos, who is Brazilian, claimed on Twitter in July 2020 that he was biracial, meaning “Caucasian and black.”

Santos claims his mother died in the September 11 terrorist attacks

Santos wrote in a July 2021 tweet that he “suspended” an account with the handle “9/11 was a victimless crime” because his mother was a victim of the terrorist attack.

He wrote, “9/11 took my mother’s life…so I’m blocking so I never have to read this again,” after the user responded to a tweet by Santos regarding immigration.

However, an obituary for Santos’ mother says she died in December 2016, more than 15 years after the attack.

He also confirmed the true date in a December 2021 tweet, where he said: “December 23rd of this year marks the 5th year that I have lost my best friend and mentor. Mom, you will live in my heart forever.’

Santos’ campaign website said his mother “survived the tragic events of 9/11” in the World Trade Center office in the South Tower and died “a few years later, losing her battle with cancer.”

A New York Times report had described Santo’s mother as a “domestic servant” or “housekeeper.”

His campaign website described his mother as a top executive.

“George’s work ethic stems from his mother, who came from nothing but worked her way up to become the first female executive at a major financial institution,” the website reads.

The congresswoman-elect said in a 2021 tweet that “9/11 claimed my mother’s life,” but Fatima Devolder died of cancer in 2016 and it’s unclear if this was 9/11-related. It is also unclear whether she was an executive or a housekeeper

The MP said he attended the Horace Mann School — an elite private school in the Brox where tuition costs $59,800 a year.

“He started Horace Mann Prep School in the Bronx, but didn’t graduate from Horace Mann because of his family’s financial difficulties,” read a 2019 biography during his first campaign for Congress, which Santos lost.

“He got a GED his senior year,” he added.

The school said he never attended, according to CNN.

“We have searched the records and there is no evidence that George Santos (or any pseudonym) attended Horace Mann,” Horace Mann Prep School spokesman Ed Adler said.

Santos said he worked on Wall Street for Goldman Sachs and Citigroup but now says he used “poor choice of words” when describing his relationship with the two firms.

The new congressman worked in a DISH Satellite call center from October 2011 to July 2012.

He also worked for LinkBridge, where Santos, in an attempt to justify his lie, said he did deals with Goldman and Citi and made “capital introductions” between clients and investors.

Santos said he “didn’t work directly” for either company.

Santos posted on Twitter in February 2021 that “my family and I” have not received rent on 13 properties he claims to own.

A review of New York State property taxes owed or paid reveals no evidence of ownership.

He claimed to have a brain tumor

On March 30, 2020, at the beginning of the US coronavirus pandemic, an interview with Santos titled “George Santos: A Corona Story” was published on YouTube. The video has since been set to private

According to Newsweek, in the video, Santos tells two men, one wearing a Guns and Freedom hat and the other sitting next to a Don’t Tread on Me flag, that he “battled a brain tumor.”

Speaking about his health, Santos said: “I have an immune deficiency and I also have acute chronic bronchitis. I also battled a brain tumor a few years ago and I had radiation which really lowers your immunity in general.

During an interview with WNYC, Santos claimed that four “people who work for me” were killed during the June 2016 mass shooting at Pulse nightclub in Orlando, which left 49 dead.

No connection has yet to be established between the victims and Santos.

Said he was the founder of accharitable foundation

Santos said he started a tax-exempt animal rights group, Friends of Pets United, which has rescued more than 2,500 cats and dogs.

However, the IRS could not find any record of the group’s charitable status, nor could the New York or New Jersey Attorneys General uncover any documentation confirming that Friends of Pets United was registered as a charity.

However, public records show that Santos was previously married to a woman named Uadla Vieira, a native of Brazil, until 2019

Santos claimed he was mugged in 2016 on his way to pay his apartment rent in Queens.

“I went to the check stand at 31st and 23rd Avenues in Astoria to request a freeze.

“I’m unable to provide a police report today as I’ve been asked to come back on Tuesday to collect it.”

However, the NYPD has no record of the incident, the outlet reported.

Santos eventually moved out of the apartment as a result of the case and paid off the remainder of his rent debt.