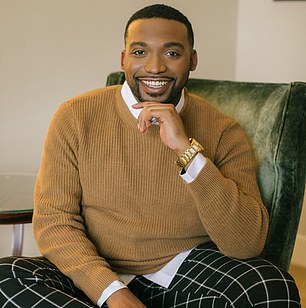 Quintin Bostic was caught on camera bragging about CRT in Georgia

A Georgian education activist and researcher has been placed on administrative leave after he was caught on camera describing himself as a “bad salesman” who smuggled important lessons on race theory into the school curriculum.

dr Quintin Bostic was secretly inducted by Project Veritas when he boasted about circumventing Georgia’s April 2022 ban on CRT teaching.

“I would say I’m a good salesman, but I’m also a bad salesman. Why bad.’

He called the governor of Georgia an “idiot”.

Bostic, a program director at Teaching Lab, said he would wisely include material he endorses in lesson plans.

“And on top of that, if you don’t say the word ‘critical race theory,’ you can technically teach it.”

“We teach diversity. We teach all people love.

“And I’m thinking behind the scenes, ‘Teach it like this though. Make sure you say this and use these words and use this book.”

Critical race theory has become one of the most controversial topics in schools today.

The concept explores the role of race in modern America. Proponents say it’s a valuable reappraisal of American history, but critics say it teaches white children to feel guilty about their skin color.

Georgia’s Ministry of Education said in a statement: “Attempts to promote or advance these ideologies in Georgian schools are illegal under the Protect Students First Act, which came into force in 2022.”

Bostic has been open about his mission to “smuggle” the ideas into Georgia schools.

The Washington DC-based nonprofit, which bills itself as “a nonpartisan, nonprofit organization that supports teachers with research-backed professional learning that helps improve student outcomes,” said it has never sold curriculum in Georgia.

In fact, a map on their website shows 24 states they work in — and Georgia isn’t one of them.

“Critical race theory is not part of Teaching Lab’s professional learning model,” they explained, adding that the views expressed are solely Bostic’s.

Project Veritas then released a second clip in which Bostic claimed that the nonprofit’s founders benefited well from the company and called CEO Sarah Johnson “a freaking psychopath.”

“The views expressed by the staff member in these records are not those of Teaching Lab and are inaccurate and regrettable.

“The employee has been placed on administrative leave pending further investigation.”

Bostic has not commented on the videos.