“Uncertain, exposed … a concern for the World Cup” – and the Bayern stars are the prime suspects of guilt! The German press criticizes their “weak” team for being “poisoned” by England – and fears for their chances in Qatar

By Oliver Salt For Mailonline

Germany failed to win over their national press in Monday’s vibrant 3-3 draw with England at Wembley Stadium, where the two-goal collapse led the country’s leading media to fear the worst ahead of the World Cup in Qatar.

Hansi Flick’s side salvaged a late point against the Three Lions thanks to a mistake by goalkeeper Nick Pope that cost the hosts a sensational win three minutes from time in London.

Pope’s error, which Kai Havertz pounced on to score his second goal of the game, came after England fought back by two goals to lead 3-2 on the evening, beating under-fire boss Gareth Southgate in time strengthen. 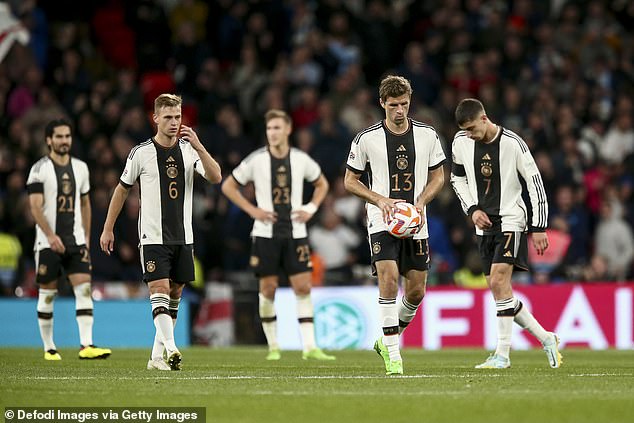 Havertz rolled the ball home from long range with just under 25 minutes to go after Ilkay Gundogan missed a penalty to double Germany’s lead only for Southgate’s introduction of Mason Mount and Bukayo Saka to pay off.

Luke Shaw pulled one back first as a resuscitated England increased the pressure before Mount equalized and Kane tucked a penalty seven minutes from time.

It was a stunning comeback from Southgate’s men and an unexpected collapse from Germany, whose performance was dismantled by the national press on Tuesday.

In any case, they could not impress the German media, which Sport Bild headlined: “World Cup worries after Wembley madness!”

Thomas Müller and Co. gambled away a two-goal advantage over their old rivals in London on Monday

Sport Bild headlined “World Cup worries after Wembley madness!” on the back of the game

The report took aim at Germany’s defensive weaknesses at Wembley which gave England a shock run back into the game in the last 20 minutes.

It says: ‘Cause to worry about the World Cup: The defensive botch around the back four with [David] Space, [Nico] Schlotterbeck, [Niklas] Sule and [Thilo] sweeper. Schlotterbeck is responsible for the decisive Kane penalty.’

Sport Bild adds: “One thing is clear: there is still a lot to do before the start against Japan.”

“The defensive line with Thilo Kehrer, Niklas Süle, Nico Schlotterbeck and David Raum acted uncertainly, especially in the second half,” it said. “Before the 1:2, the German defense came too late several times. Before the 2:3, Nico Schlotterbeck was late against Jude Bellingham and conceded a penalty which Kane converted.’

Flick and company received an even harsher assessment from DW, which claimed Monday’s draw with England revealed “the ugly truth” about their current squad.

The German defense was picked apart the most, with Nico Schlotterbeck drawing criticism

Their report read: “For seven weeks, Hansi Flick will sit to the sound of Harry Kane’s penalty hitting the top corner. It was the sound of the curtain being drawn back as the ugly truth of this German side was revealed.

“Thirteen games without defeat is all well and good, but in the last two competitive games before the World Cup in Qatar, Germany lost their form.

“In the end Germany flattered a draw and when Kane converted from the penalty spot it marked an 11-minute period in which Germany went from a 2-0 lead to a deserved 2-3 deficit.”

DW added: “This should be the game that proves that losing in Leipzig was just a minor blip, a bad day at the office and that the desire to compete for the World Cup in Qatar is not based on blind faith.

“Instead, Germany seemed like a vulnerable team that, once injured, bled to death quickly. When Mason Mount scored England’s second goal just three minutes after the first goal, a third never felt far away.’

https://www.dailymail.co.uk/sport/football/article-11253899/Germany-slammed-weak-insecure-national-press-collapse-against-England.html?ns_mchannel=rss&ns_campaign=1490&ito=1490 Germany was described as “weak” and “unsafe” by the national press after collapsing against England