Gladys Berejiklian ‘held a torch’ for her new boyfriend for years, a new book reveals, while also describing why some former staff members felt intimidated by her.

In her book The Secret, about the rise and spectacular fall of the former NSW premier, journalist Alexandra Smith says some former staffers described working for Ms Berejiklian as like working for the Queen.

‘Berejiklian would walk past them to her office; they would dare not speak to her,’ Smith writes.

The book reveals how Ms Berejiklian ‘held a torch’ for boyfriend Arthur Moses for years before they got together.

‘Gladys has always held a torch for Arthur,’ a senior Liberal is quoted as saying.

It also quotes a friend who felt ‘aggravated’ by Ms Berejiklian’s response to her secret romance and puts the reader right at the heart of her final moments in power. 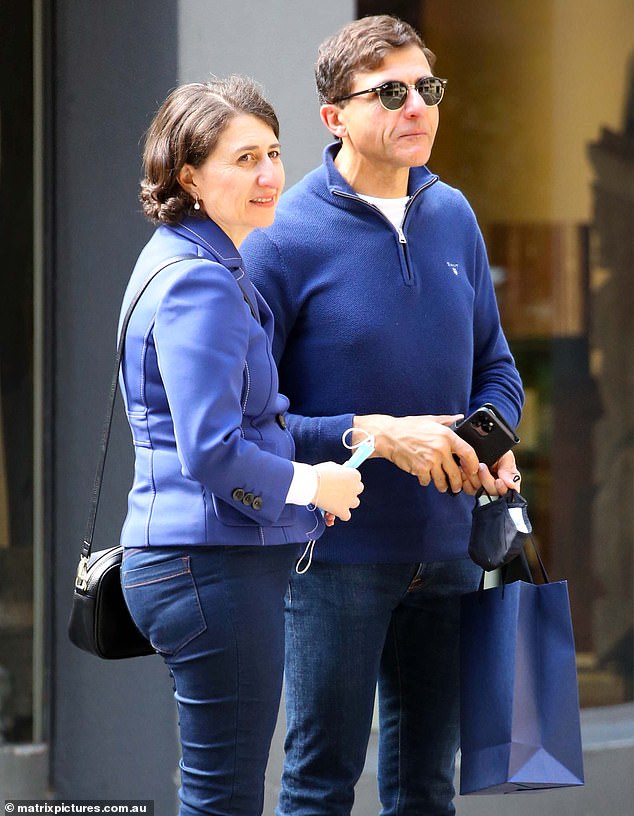 Gladys Berejiklian was said to have ‘held a torch’ for her boyfriend Arthur Moses, pictured with Ms Berejiklian in November last year, for a number or years before they got together.

The Secret, and all its revelations, has come after Ms Berejiklian was forced from power 11 months ago when it emerged she was the subject of a corruption inquiry over her secret relationship with disgraced Liberal MP Daryl Maguire.

Despite managing to keep her clandestine ‘close personal relationship’ with Mr Maguire so secret – her own family did not know about it – the book reveals that Ms Berejiklian did confide in one person that there was a man in her life.

In 2015, she told her trusted former media adviser and close friend Lisa Mullins that she was in love, but would not reveal who with, saying it would be too much of a shock to everyone – a sentiment which turned out to be a huge understatement.

1. Engaged in conduct between 2012 and 2018 that was ‘liable to allow or encourage the occurrence of corrupt conduct’ by former Liberal MP Daryl Maguire, with whom she was in a close personal relationship between 2015 and 2018

2. Exercised her official functions dishonestly or partially by refusing to exercise her duty to report any reasonable suspicions about Mr Maguire to the ICAC

3. Exercised any of her official functions partially in connection with two multimillion-dollar grants in Mr Maguire’s electorate, to the Australian Clay Target Association Inc and the Riverina Conservatorium of Music.

Ms Mullins was intrigued, but also just glad to see her friend ‘glowing in love’. It was the first time Ms Berejiklian, who always said she was married to her job, had mentioned any romantic interest.

She told Ms Mullins she wanted to have a baby with the mysterious partner, a revelation that would subsequently emerge publicly in the ICAC.

But the last time Ms Mullins was in contact with her once-close friend was to wish her a happy 50th birthday in September 2020.

A few weeks later, she and everyone else learned of Ms Berejiklian’s relationship with Mr Maguire.

‘What really aggravated me about this whole thing was Glad always wanted to get promoted on merit, was against quotas and made much of the fact that she got where she was on her own,’ Ms Mullins tells Smith in The Secret.

‘And yet, when push came to shove, she really played the “poor, poor pitiful me, I got dudded by a bad boyfriend” line”.’

Media strategy to save a career

That ‘dudded by a bad boyfriend’ line was part of a very carefully planned strategy to save Ms Berejiklian’s career.

The plan saw her give a ‘tell all’ interview to News Corp about her heartbreak, followed by commercial radio appearances to tell her story of being a woman wronged by a bad boyfriend.

For the News Corp story, Ms Berejiklian was photographed dressed down in jeans and a blazer – far removed from her usual feminine floral dresses and sharp jackets – and said she was heartbroken as she had wanted to marry Mr Maguire.

Gladys Berejiklian (front, again in one of her favoured floral dresses) and Daryl Maguire (behind) who she was in a secret relationship with for years

In an interview with on 2GB radio, morning host Ben Fordham told Ms Berejiklian, who is a friend of his, to ‘hang in there, stay strong’.

He added that ‘based on your lack of judgement in relation to this matter, you can’t be premier into the future’.

Then NSW Liberal premier Nick Greiner had ICAC set up in 1988 after a turbulent and controversial period of Labor government.

Some of his colleagues warned he was creating ‘Frankenstein’s monster’, but he persisted.

Then Mr Greiner became ICAC’s first major victim, forced from office in 1992. Though he was later cleared on appeal, the damage was done.

In 2014, another Liberal scalp was claimed, with then premier Barry O’Farrell resigning after it emerged he had unwittingly lied to the ICAC about getting a $3,000 bottle of wine.

If Mr O’Farrell’s downfall was made more surprising for its relative triviality, for many people, Ms Berejiklian’s survival after the 2020 revelations of her secret relationship with Mr Maguire was truly shocking.

But she not only survived, she thrived. Her personal popularity went up and a constant stream of flowers from well wishers were delivered to her office.

She had, seemingly, dodged a Daryl Maguire-shaped bullet.

In a press conference after Ms Berejiklian finished giving evidence, she was defiant and said she had never even considered resigning.

‘I haven’t done anything wrong. If I had done something wrong, I would be the first person to (resign),’ she said.

But if a week is, famously, a long time in politics, a year can fly by. And it did, with Ms Berejiklian backflipping on that defiance and resigning in October 2021; becoming the third Liberal premier to be forced from office due to an ICAC inquiry.

Gladys Berejiklian, pictured after from a shopping trip, will soon find out the ICAC’s findings

Her legal team was forewarned that ICAC planned to issue a public statement at noon. It arrived in journalists’ inboxes at 12.01pm – the country’s most popular political leader was facing a corruption inquiry into her conduct.

It meant her leadership was untenable and her 18-year career as an MP was about to come to a crashing halt.

The ICAC statement was followed shortly after with news that the premier would make a ‘significant announcement’ within an hour.

She said resigning went against every instinct of her being, but she had ‘been given no option’ – ICAC claimed another Liberal head.

Even worse for such a private person, she must have realised that the most intimate details of her personal life were about to be publicly exposed.

But Ms Berejiklian insisted she was going out on a high.

‘I have never felt stronger, nor more confident in my leadership,’ she said. ‘I have no regrets during my time in public life.’

Though she may have known what was likely to come up, the public had no idea of the extent of ICAC’s investigations into Ms Berejiklian, including devastating phone taps.

Sometimes on intercepted calls with Mr Maguire, the then premier sounded ‘like a bored girlfriend, humouring her partner’s relentless talk of hopeless side hustles,’ Smith writes.

But when she was recorded saying ‘I don’t need to know that bit’, ‘she sounded like she was actively trying to turn a blind eye’.

Gladys Berejiklian (pictured right) is under investigation by ICAC for her conduct while NSW premier in relation to her former boyfriend, ex-MP Daryl Maguire (pictured left)

On another recording, Ms Berejiklian told Mr Maguire that ‘I’ll throw money at Wagga, don’t you worry about that’.

She was referring to her plans for the Wagga Wagga by-election, which was caused by Mr Maguire resigning after his evidence at an earlier corruption inquiry.

Mr Maguire mentioned the ‘top three things’ he wanted for the constituency and suggested one project was being blocked by bureaucrats.

Ms Berejiklian said ‘don’t worry; I can overrule them’.

The relentless teasing out of information, tape by tape and document by document, riveted the public.

And thanks to Covid, they could also watch it all live. Public hearings in person were not possible due to the pandemic, so it had to be livestreamed.

Of all the evidence ICAC heard, that from Mike Baird, Ms Berejiklian’s predecessor as NSW premier, may have been the hardest for her to hear.

In a few damning words, he condemned her for her secret relationship with Mr Maguire.

On October 20, he said he first he heard of the relationship ‘when it was revealed here (at ICAC) about a year ago’, adding that he was ‘incredulous’ at the news.

‘Certainly I think it should have been disclosed… to myself as the premier’ and that it was a ‘potential conflict of interest’, he said.

That ‘potential conflict of interest’ was that Ms Berejiklian was head of a committee deciding on funding for a multi-million dollar project that Mr Maguire was very keenly backing.

On the last day of her testimony at ICAC, Mr Robertson’s final question reminded Ms Berejiklian of the ‘hundreds, perhaps thousands’ of meetings of Cabinet and committees she had attended.

‘Did it never occur to you… that it may have been desirable, if not required, to make a declaration regarding your relationship with Mr Maguire?’

Mr Berejiklian gave a one word answer. ‘No.’

Smith’s book is a fine summing up of a bizarre episode in Australian political history, though it could have a short shelf life of relevance.

It is coming up to a year since Ms Berejiklian fronted the inquiry that ended her life in politics.

Ruth McColl, SC, the anti-corruption commissioner overseeing the inquiry into Ms Berejiklian’s conduct had her term renewed in a latest extension to the high-profile investigation.

She will continue as a temporary commissioner until the end of October.

Barring a further extension, it can’t be too long more before ICAC announces its decision on whether or not the former premier can be deemed to have acted corruptly.

Former NSW premier and now Managing Director Enterprise and Business at Optus Gladys Berejiklian (right) speaks on a panel during the Bush Summit in Griffith, NSW on  Friday

Ms Rosmarin said she believed Ms Berejiklian would be a ‘game changer’ in her new role.

However that role is unlikely to survive an adverse finding by ICAC.

What The Secret reveals about Gladys Berejiklian beyond politics

Despite being born in Sydney, she did not speak a word of English before starting school

When working in Woolworths as a teenager, she was popular with customers for mistakenly selling artichokes as much cheaper chokoes

Ms Berejiklian lived at home until she was 29

In her early 20s, she was anxious about not having a boyfriend

She made no secret of watching her weight and counting calories

Her office fridge was always stocked with her favourite drink, Coke Zero

She always had the television on in her office, but it was not on a news channel, it was most likely a reality TV show

The former premier is a big fan of the Kardashians who, like her, are of Armenian heritage