Good Morning Britain presenter Noel Phillips is “devastated” after he was “ambushed, racially assaulted and spat on” in a London street attack

By Oliver Price for Mailonline

Mr Phillips, GMB’s North America correspondent, told worried fans on Twitter that he was attacked by a suspected “reckless thief” on a busy central London street in the early hours of Saturday morning.

He posted a photo of a man being held down by two Met cops and thanked officers Sergeant Clark and PC Busson for helping him “catch and hold him down.” 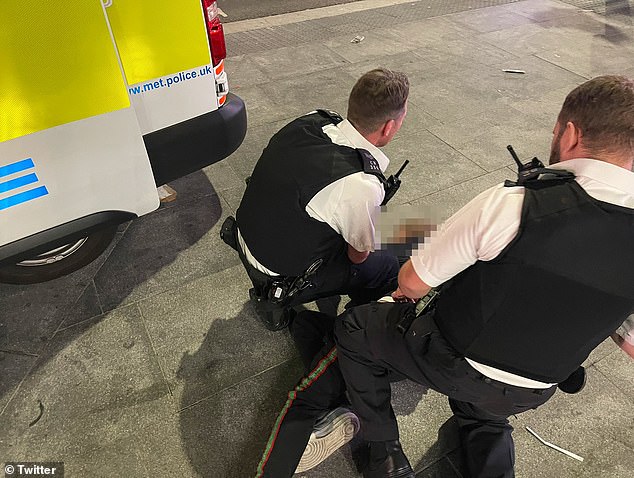 Good Morning Britain news presenter Noel Phillips posted a photo of an alleged “reckless thief” being held down by two Met cops and thanked Sergeant Clark & ​​PC Busson for helping him “catch him.” and hold on”.

Around noon today, Mr Phillips tweeted: “I was mugged, racially assaulted and spat on in a busy street in central London yesterday. i’m ok Just shaken.

“Thank you to Sgt Clark & ​​PC Busson from @metpoliceuk Euston Town Center team for helping me catch and apprehend the reckless thief.”

In response to his post, the TV journalist received kind words from industry colleagues and fans.

The Metropolitan Police have confirmed a 17-year-old man has been arrested after officers were alerted to the incident on New Oxford Street around 2.15am this morning.

He was arrested on suspicion of robbery and a racially aggravated public order offense and is currently in custody.

The force said the alleged robber was not injured and they were still investigating the incident.

A Met spokesman said: “A man has been arrested after officers on patrol in central London intervened following a robbery.

“At around 2:15am on Saturday 3 September, officers on patrol at New Oxford Street, WC1, were alerted to the incident.

“A 17-year-old man has been arrested on suspicion of robbery and a racially aggravated public order offense after comments were made. He remains in custody.

“The robbed was not injured.

“The investigation into the circumstances continues.”

https://www.dailymail.co.uk/news/article-11176507/GMB-presenter-Noel-Phillips-shaken-mugged-racially-assaulted-spat-London.html?ns_mchannel=rss&ns_campaign=1490&ito=1490 GMB presenter Noel Phillips ‘shattered’ after being ‘attacked, racially assaulted and spat on’ in London

The murder investigation was launched after a 41-year-old man was stabbed to death at a house in Wakefield, West Yorkshire