A teenager has lashed out at reporters outside a Gold Coast police station and made rude jokes about their families after allegedly robbing a gas station with a machete.

The 18-year-old shouted “f*ck Seven News and f*ck Nine News” after exiting the Gold Coast Watchhouse in Southport on Saturday and trying to snatch microphones from reporters’ hands.

The teenager has been accused by police of ambushing a Puma petrol station in Labrador with a large knife on Friday night and looting a bag of cash before fleeing.

“I didn’t rob this place, so you guys can ram it up your ass,” he told journalists.

An 18-year-old is accused of robbing a Gold Coast gas station with a knife point.

The young man is said to have demanded money from a seller armed with a machete.

The teenager was released on bail and denied any involvement in the alleged robbery. #9News pic.twitter.com/3YanEqUYoW 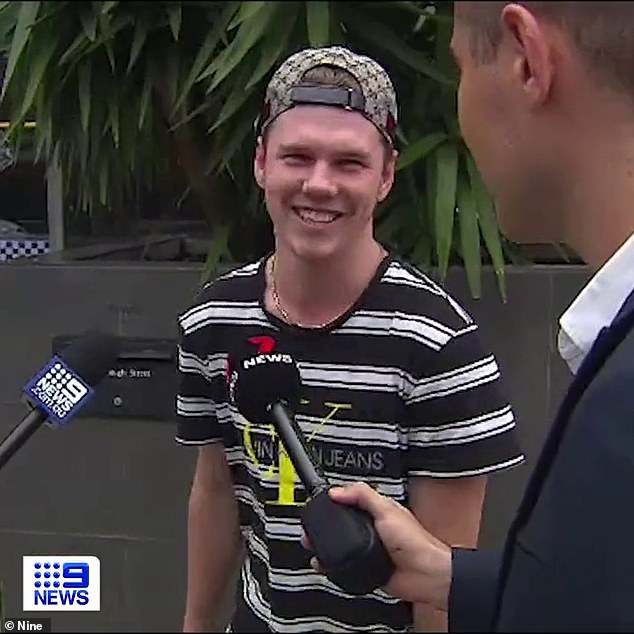 Police allege the teenager entered the Puma Nightowl in Labrador around 9.50pm on Friday night and threatened the shop assistant.

The 48-year-old woman left a bag of money on the till when he allegedly threatened her with a machete, before snatching the money and running away.

Two customers, a 26-year-old woman and a 27-year-old man, were in the store at the time.

The alleged attacker was found by police in a nearby park and arrested.

“I remember going home and then being arrested for some stupid thing,” he said of his arrest.

“Bro, you’re asking why would I rob a store and then walk across the park back to the store I just robbed?”

When asked how his night in the guardhouse went, he started making jokes about the reporters’ families.

“Yeah pretty good. Your mom came over and we had a pretty good night,” the teen told the 9News reporter.

When asked by the 7News reporter what he planned to do after his release, the teenager launched another brutal attack.

“I’ll probably see[the reporter’s mother]again, sounds like a good idea to me. I’ll see his mother, then I’ll see your sister.’

When the 7News journalist told him he didn’t have a sister, the 18-year-old joked again.

“Well, you will in nine months, won’t you?” he said, implying that he had impregnated the reporter’s mother.

When the 7News journalist didn’t respond, the teenager laughed.

“You don’t get the joke because you’re being challenged.”

He has been charged with armed robbery and possession of drugs (Xanax) and is not allowed to go more than 50 meters from the gas station.