Fernandez-Castano plays the DP World Tour, the circuit that will host 17 LIV players this week in the PGA Championship at Wentworth.

McGinley is now a DP World Tour board member, having won the Ryder Cup six times in his career as a player, vice-captain and captain.

Prior to Wentworth, McGinley gave an interview to the Sunday Times in which he claimed “nobody (DP World Tour players) want the LIV guys in our tournaments”.

But that doesn’t seem entirely true. Responding to McGinley’s words on Twitter on Sunday, Fernandez-Castano tweeted a picture of McGinley’s interview with the quote and said: “Please do not speak on behalf of all members @mcginleygolf.

“I have absolutely no problem with the @LIVGolf players playing on the @DPWorldTour.” 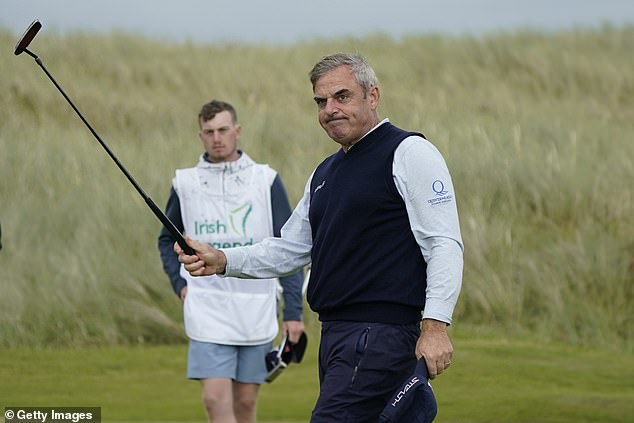 Fernandez-Castano was retweeted by Ian Poulter and Lee Westwood, two of the leading golfers to sign up for the Saudi-backed LIV circuit.

McGinley later responded to Fernandez-Castano on Twitter, saying: “Gonzalo makes a good point. I should have been more precise and clear in that particular quote.

“It should have read ‘every player past and present I’ve spoken to’.” Apparently he wasn’t someone I had spoken to;

McGinley made his feelings for LIV unmistakably clear in his Times interview.

“It breaks my heart because I have an emotional connection with each of these (LIV) players,” McGinley said. “I’ll see (Ian) Poulter and shake hands with Wentworth, same with Westwood and all the guys I shared team rooms with. This bond will never be broken. But you know, definitely, we’re on different sides now.

“The LIV players don’t come for the €2m or €3m tournaments in the Czech Republic or Switzerland, but they do come for the £6m tournament at Wentworth. That led to a lot of resentment. keith [Pelley – DP World Tour CEO] spoke to practically every one of our players. Nobody wants the LIV boys in our tournaments.’

Wentworth starts Thursday in England with one of LIV’s most ardent critics, Rory McIlroy, the leading player in the field.

Rory McIlroy, like McGinley, was a harsh critic of LIV’s impact on the game of golf

McIlroy has also slammed the LIV players returning to a DP event, saying last week: “I hate what it (LIV) is doing to the game of golf. I hate it. I really do.

“It’s going to be hard for me to go to Wentworth in a couple of weeks and see 18 of them there. It just doesn’t suit me.”

“It’s going to be a little weird and obviously a little disappointing. But they won their little thing.

“It will be interesting to see what happens. Obviously they are [the DP World Tour] not quite as strong as the PGA Tour in terms of regulations or whatever. Yeah I guess we’ll just have to see how it goes.”

How social media influencers make £137k a year in the UK

Tom Cruise performs a DANGEROUS stunt on a biplane wing for the upcoming Mission: Impossible movie