‘Good night my darling’: James Middleton announces the death of his 15-year-old therapy dog, whom he once credited with helping him ‘overcome mental health issues’.

By Elizabeth Haigh for Mailonline

The Princess of Wales’ brother James Middleton has announced the death of his beloved dog Ella in a heartbreaking Instagram post paying tribute to the therapy dog ​​who helped him battle clinical depression.

The entrepreneur, who founded raw food brand Ella & Co, which he named after his beloved spaniel, paid tribute to his “dear Ella” on Friday afternoon, who died at the age of 15.

Mr Middleton said Ella supported him “from my darkest days to my happiest”.

He has previously credited the black spaniel with helping him overcome his mental health issues and introducing him to his wife Alizée Thevenet. 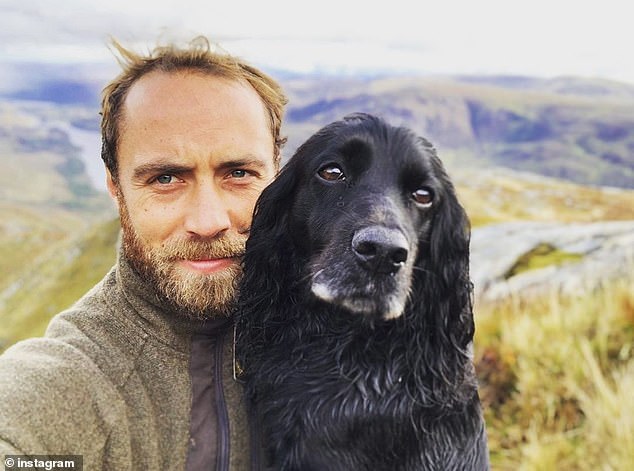 The entrepreneur shared this photo of him cradling Ella, taken just hours before her death

He wrote on Instagram: “It is with great sadness that I announce that my dear Ella has passed away.

“Ella has been by my side for 15 years, from my darkest days to my happiest. I will miss her terribly.

“Ella had a very short illness, she slipped out of my arms at home and is now buried next to Tilly in the garden. I took this picture just a few hours before she died

“I’m just pulling myself together to write this and despite the fact that I knew this day would come, it doesn’t make it any easier.

‘Good night my darling Ella, Alizee and the dogs will take good care of me.’

He accompanied the news with two photos of Ella, including one he took in his arms just hours before her death.

Minutes after he posted the message, Ella & Co said she was “already missing”.

Mr Middleton told his followers: “For 15 years, Ella has been by my side, from my darkest days to my happiest.”

Mr. Middleton even started his own raw dog food company, naming it after his beloved pooch

Princess Charlotte gave the first glimpse of her beloved pet spaniel, Orla, as she celebrated her seventh birthday with an adorable snap of spring

He previously told his followers that Ella helped him overcome clinical depression and “saved his life,” which led him to sign up for Pets As Therapy, a charity that visits foster homes with dogs to help people recover .

He and Ella had been volunteers with the charity for more than four years before her death on Friday.

Mr Middleton has previously described his “really difficult battle” with the condition: “A few years ago I was in a very dark and lonely place, existing without purpose or direction, the constant heart pounding anxiety taking away any joy, excitement or anticipation.

“During this time, I realized how special my dogs are [sic] Ella, helped me through a really difficult battle with clinical depression. She saved my life.’

By the time Ella died, Mr Middleton and his wife had seven dogs, including a puppy from a litter born to one of their pooches late last year.

He previously described how Ella ran over to Alizée at a club in London when they first met in 2014.

Mr Middleton went over to “sorry and bring Ella back” and his wife mistook him for a waiter. They married in 2021.

As well as his own love of spaniels, Prince William and Kate Middleton’s daughter Charlotte has also been spoiled with a loving companion after her uncle gave her a puppy in 2020.

Princess Charlotte gave the first glimpse of her beloved pet spaniel, Orla, as she celebrated her seventh birthday with an adorable snap of spring.

The little princess was seen hugging her dog warmly as she posed in a field of bluebells in a sweet photo taken by the Duchess of Cambridge in Norfolk in May.

Orla, whose name is of Celtic origin meaning ‘golden princess’, was bred by the Duchess’ brother James and was given to the family shortly before the death of their spaniel Lupo in November 2020.

10,000 Jeremy Clarkson fans sign a petition urging ITV not to sack the 'Who Wants To Be A Millionaire' host