Senate Republicans Chuck Grassley and Ron Johnson wrote a letter to Facebook, urging them to turn over any communications they had with the FBI and DOJ regarding Hunter Biden’s laptop and business dealings.

The letter, addressed to Mark Zuckerberg, also solicits the names of FBI and DOJ officials who told the social media giant that a document dump ahead of the 2020 election was “Russian disinformation.”

This warning allegedly prompted Facebook to censor and shut down reports about the laptop in the New York Post.

Johnson and Grassley write, “The American people deserve to know if the FBI used Facebook as part of its alleged plot to discredit information about Hunter Biden.”

Grassley said he will investigate Hunter Biden further and wants to root out “political bias” within the FBI at a meeting with Iowa Republicans on Sunday. 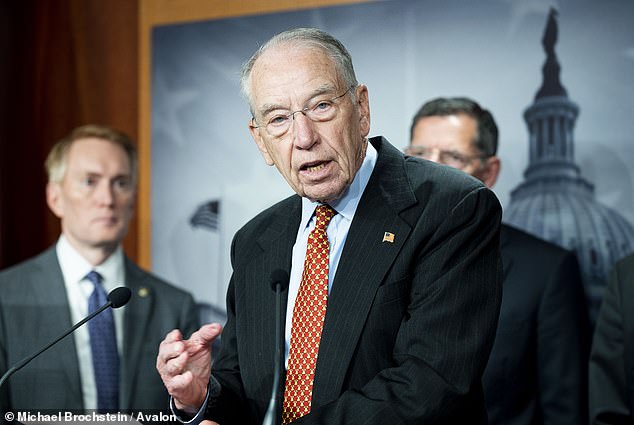 Republican Senator Chuck Grassley (pictured) said he will continue to investigate Hunter Biden and root out “political bias” within the FBI during a meeting with Iowa Republicans Sunday at the Linn County Fairgrounds in Central City, Iowa

Grassley and Ron Johnson wrote a letter to Facebook, urging them to turn over any communications they had with the FBI and DOJ regarding Hunter Biden’s laptop and business dealings

President Joe Biden (left) and Hunter Biden (right) depart the Church in South Carolina earlier this month. Republicans, including former President Donald Trump, are upset that stories about Hunter Biden’s laptop have been buried on social media ahead of the 2020 election

They added, “If so, Congress and the American people need clarity as to the extent to which the FBI communicated with Facebook about Hunter Biden-related information during the 2020 election.”

The tech billionaire explained that while the platform didn’t completely block the story like Twitter, it was still pushed down users’ news feeds for a week pending more information arriving suggesting whether the story was true or not .

He said the platform decided to limit story sharing but not ban it outright.

The FBI urged Meta employees to beware of Russian propaganda ahead of the November 2020 election.

Facebook CEO Mark Zuckerberg has revealed how the platform used an algorithm to suppress Hunter Biden’s laptop story when it first surfaced in 2020.

At the time, more than 50 former senior intelligence officials signed a letter claiming the laptop story had “all the classic hallmarks of a Russian intelligence operation.”

Zuckerberg said, “So we took a different route than Twitter. So basically the background here is the FBI, I think basically some people on our team came up to us and said, “Hey, um, just so you know, you should be on high alert.”

He continued: “There was the – we thought there was a lot of Russian propaganda in the 2016 election. We know that basically there will be some kind of garbage dump – it’s something like that. So be vigilant.’

Following Zuckerberg’s claims, House Minority Leader Kevin McCarthy said: “The FBI worked with Big Tech weeks before the 2020 election to silence news and attempt to control your access to information.

Hunter Biden has not been charged with any wrongdoing, but investigators have been looking into alleged violations of federal gun and tax laws

The massive cache of files, emails and photos was seen by many as compelling evidence that could have turned the tide in the election, but social media bosses at Facebook and Twitter stole the story out of unfounded fears it might turn out to be Acting Russian misinformation, downplayed.

“Congress Democrats have deliberately ignored the facts. When the Republicans are back in charge, we will hold them all accountable.’

On Monday, Trump claimed on Truth Social that he would have won the election if Hunter Biden’s laptop story — originally published by the New York Post but corroborated by DailyMail.com, among others — had been widely shared.

The president’s son’s laptop contained a number of salacious images – including his sex life and drug use – and documents related to his foreign dealings.

The Biden campaign tried to brush off the stories leading up to the 2020 presidential election by suggesting the laptop was more likely Russian vote-rigging.

Hunter’s laptop contained a lot of compromising and adult content — including nude, pornographic and drug-related images and videos of the president’s adult son

Twitter briefly suspended the New York Post’s account after the newspaper reported on the contents of the laptop.

Meanwhile, the FBI was investigating the Trump campaign’s ties to Russia, but kept that investigation under wraps until the Republican won the 2016 election.

Jon Paul Mac Isaac first acquired the laptop in 2019 when Hunter dropped it off at his store and never came back to pick it up.

He then turned it over to the FBI, and eight months later, in September 2020, Mac Isaac turned over a copy of the hard drive to Donald Trump’s attorney, Rudy Giuliani.

Giuliani then reportedly released documents and photos from the ride to the New York Post and gave a full copy of the ride to Trump adviser Steve Bannon and his podcast co-host Jack Maxey.

On October 14, three weeks before the election, the New York Post published its first article on the scandal surrounding an alleged meeting between Joe Biden and a Ukrainian businessman found in Hunter’s emails.

Other articles appeared on Biden’s relationship with China and the exposure of Hunter’s drug and sex life.

Mainstream news outlets questioned the story and its source, with many speculating that it was part of a misinformation campaign by Putin to influence the election.

But the New York Post had seen evidence of a December 2019 FBI subpoena to seize the computer and hard drive.

By March 2021, DailyMail.com had authenticated the laptop and its contents, which mainstream news outlets like the New York Times failed to do for another 12 months.

Is Breaking Bad in Fortnite?