The death of Mikhail Gorbachev could prove a point for even more tensions between Russia and the West as it emerged today that the former Soviet leader may not receive a state funeral.

Gorbachev died yesterday at the age of 91 amid the war in Ukraine that led to a complete breakdown in ties between Vladimir Putin and Western leaders, who have imposed tough sanctions to hamper the Kremlin’s war effort.

And when Gorbachev’s predecessor in the Kremlin, Konstantin Chernenko, died in 1985, a group of serving Western leaders, including British Prime Minister Margaret Thatcher and West German Chancellor Helmut Kohl, attended his memorial service.

But Putin’s spokesman, Dmitry Peskov, announced today that the Kremlin was still deciding the extent of the funeral for Gorbachev, despised by many Putin hardliners for his role in bringing about the end of the Soviet Union.

And the sorry state of political relations, combined with the sweeping sanctions Western governments have imposed on Russia, means Putin is unlikely to allow European and US political leaders to attend a ceremony. 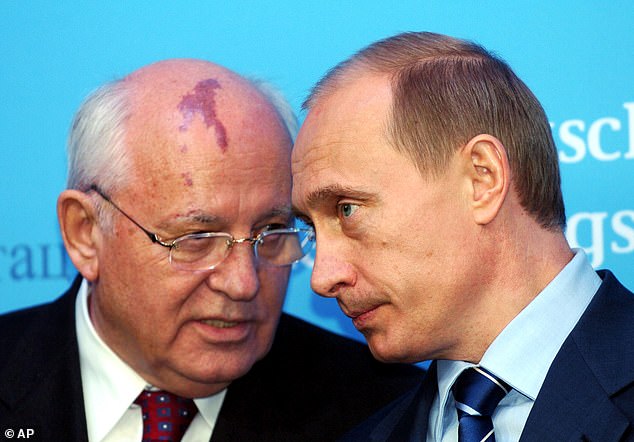 Russian President Vladimir Putin (right) talks to former Soviet President Mikhail Gorbachev in 2004. Pro-Putin commentators have expressed contempt for Gorbachev, who they see as a “traitor” for his role in the collapse of the Soviet Union

Mikhail Gorbachev and US President Ronald Reagan during a meeting in 1990. The pair negotiated an end to the Cold War and reached agreements to limit the spread of nuclear weapons

Gorbachev maintained a close friendship with Reagan after he was ousted from power in Russia and was well liked by many of his Western counterparts, including Thatcher (right).

The last publicly shared picture of the late Mikhail Gorbachev was published by Russian economist Ruslan Grinberg on July 1, 2022

Gorbachev addresses a group of 150 businessmen in San Francisco on June 5, 1990

In the West, Gorbachev is seen as a peaceful political giant whose passing should be commemorated.

He instituted policies that allowed for greater freedom of speech and economic reforms in Russia, liberated several Eastern European and Baltic states from decades of Russian rule, and negotiated an end to the Cold War with US President Reagan—all while speaking less than in power was seven years.

He maintained a close friendship with Reagan after he was ousted from power in Russia and was well liked by many of his Western peers, including Thatcher.

But Putin, who famously described the collapse of the USSR as the “greatest geopolitical catastrophe” of the 20 invasion of Ukraine.

With sanctions imposed on Russia by the West, including a ban on flying to Moscow, the Russian tyrant will most likely be unwilling to accommodate Western leaders who have openly criticized him and his actions for months.

Putin may also be reluctant to get close to Western leaders at a time when rumors of his deteriorating health are rife and his public appearances are infrequent and often carefully choreographed.

Gorbachev’s funeral is expected to take place at Moscow’s Novodevichy Cemetery, where the former Soviet leader will be buried next to his wife Raisa Gorbachev.

His Gorbachev Foundation announced today that a date has not yet been set.

International leaders were almost unanimous in their praise for Gorbachev as tributes poured in for the only Soviet president following the announcement of his death last night.

US President Joe Biden said: “Mikhail Gorbachev was a man of remarkable vision… he worked with President Reagan to reduce our two countries’ nuclear arsenals… and welcomed democratic reform.

“The result was a safer world and more freedom for millions of people.”

UN Secretary-General Antonio Guterres described Gorbachev as “a unique statesman who changed the course of history”.

“He did more than anyone else to bring about the peaceful end of the Cold War. The world has lost a preeminent global leader, committed multilateralist and tireless advocate of peace.’

And British Prime Minister Boris Johnson said: “I have always admired the courage and integrity he showed in bringing the Cold War to a peaceful end… At a time of Putin’s aggression in Ukraine, his tireless commitment to… the opening up of Soviet society is an example for all of us.’

The head of Russia’s foreign intelligence service, Sergei Naryshkin, said: “It fell to Gorbachev to lead the country in a very difficult period and to face many external and internal challenges for which no adequate answer was found.”

Oleg Morozov, a member of the main Kremlin party United Russia, said Gorbachev should have “repented” for the mistakes that hurt Russia’s interests.

“There is a mystical coincidence that Gorbachev died at a time when the special military operation in Ukraine was taking place,” Morozov said. “He was a willing or unwilling co-author of the unjust world order our soldiers are now fighting on the battlefield.”

And Nikolai Kolomeitsev, deputy chairman of the communist faction in the Duma, went further and denounced Gorbachev as a “traitor” who “destroyed the state.”

https://www.dailymail.co.uk/news/article-11164109/Gorbachev-funeral-poses-potential-nightmare-West-Putin-amid-war-Ukraine.html?ns_mchannel=rss&ns_campaign=1490&ito=1490 Gorbachev’s funeral represents a potential nightmare for the West and Putin amid the war in Ukraine