An 81-year-old man with Alzheimer’s was left “confused and injured” after being arrested by police when he went to the wrong address.

Bedfordshire Police arrested the elderly man at 5am on Friday in Potton on suspicion of assaulting a first responder – with a wooden implement “the size and shape of which resembles a round bat”.

The arrest appears to have left the dementia patient with multiple cuts and bruises on his arms, for which his granddaughter Kayla claims he will need to see a plastic surgeon on Tuesday.

In a tweet, Kayla said: “My 81 year old grandpa was arrested because @BedsPolice got the wrong address at 3am.

“He was scared, sick and it took 10 officers/6 vehicles to arrest him. Maybe his heart attack gave him superpowers? He’s confused and injured in the cells, trying to defend himself.’

In videos of the incident, the officer explaining the charges described the object as a stick and not an “all-round bat.”

Two police officers had replied to the wrong address – the grandfather’s house – leading to the incident, which is said to have involved up to 10 people.

Police said one officer suffered a laceration to his face in the attack and the pensioner was briefly detained and has since been released pending investigation. 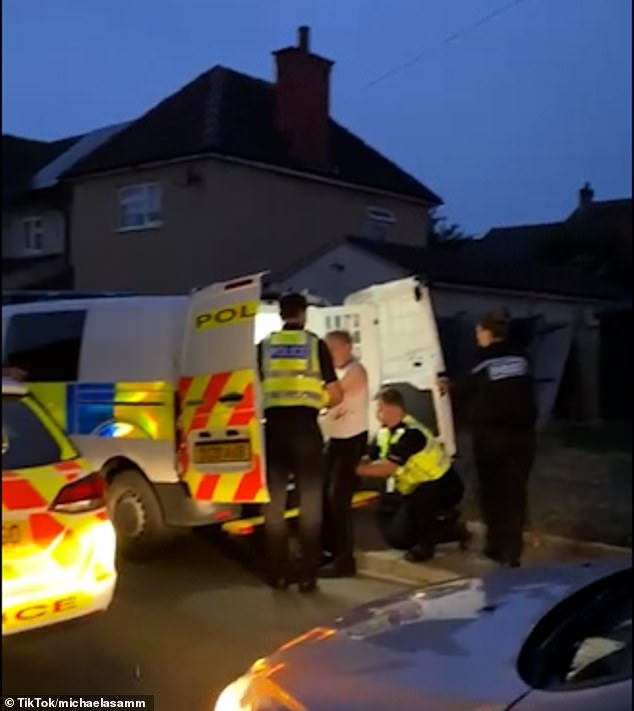 Two videos were filmed when the grandfather was arrested and in one he heard his son say: “He’s already had two strokes. You don’t do it any better.”

He said: “He has things with his brain, he has Alzheimer’s, early stages of it. You’re only making it worse. You won’t take care of him, he’s petrified.

“You’re literally not making it any better, and if he has a heart attack here, there will be consequences.

‘He’s already had two strokes. He has pills, look at them, he has eight different pills. You don’t do it any better.”

In the video, the arresting police officer can be heard talking to the grandfather in the back seat of a police vehicle.

She said: “Sir, I gave you many opportunities to take it off, the reason the handcuffs were put on is because you attacked my colleague. Regardless of age, you don’t attack anyone, okay. Just because he’s 81 years old…’

The son interjected, accusing the officer of wasting everyone’s time.

The officer continued, “That’s not the point. And you’re wasting my time too. Just because someone is 81 doesn’t give them the right to attack people.’

The older man then asked who he attacked and claimed he never touched anyone, but his son pointed out he may not remember.

The son said: “You have people staring at you and thinking, what a bunch of f***ing idiots, you have ten police officers and four vehicles here arresting an 81-year-old who could probably be having a stroke.”

The 81-year-old can be seen limping into the back of a police van and asking, “Where are you taking me?”.

He said: “I was just watching TV. So why is it all out, I’ve been watching TV. You are not interested. let go of my arm I’m not a criminal.’

The arresting officer spoke to the son about the wooden device.

The son replied, “Well, you shouldn’t look through his window and scare him.”

After the incident, several police officers and vehicles came to the scene, and the grandfather was put in the back seat of a police car

The son can be heard in the video saying, “You shouldn’t look through his window and scare him (his father).”

Bedfordshire Police released a social media statement on Saturday. It said: “Two uniformed officers responding to reports of a disturbance in Potton around 5am on Friday initially accidentally approached the wrong address.

“As they left the property, they were approached on the street by a resident holding a wooden implement.

“The two officers at the scene called for assistance and several other units participated in the assistance. All of these officers were in full uniform and in marked police vehicles.

“Before more units arrived, an altercation broke out in which one of our officers attempted to take the wooden implement from the resident, cutting her face.

“A man in his 80s has been arrested on suspicion of assaulting a first responder.

“He was briefly detained and has since been released under investigation while we review the evidence.”

Detective Chief Superintendent Julie Henderson of Bedfordshire Police said: “We understand the concerns surrounding this incident and are conducting our own internal review.

“We have also voluntarily referred ourselves to the Independent Bureau on Police Conduct for full openness and transparency and to determine if there are any learning opportunities that need to be taken forward.

‘In the coming days, the focus is on the well-being of everyone involved.’

https://www.dailymail.co.uk/news/article-11178241/Dementia-hit-grandfather-81-confused-bruised-arrest-police-went-WRONG-house.html?ns_mchannel=rss&ns_campaign=1490&ito=1490 Grandfather, 81, affected by dementia, ‘confused and injured’ after being arrested by police who went to the WRONG house

'It's NOT a foul!': Experts claim Gabriel Martinelli's goal at Old Trafford should have stood