Greta Thunberg was seen smiling as she was carried away by police today as she protested outside a German coal mine.

The Swedish climate activist and other demonstrators confronted the police at a mine in Lutzerath, North Rhine-Westphalia.

The village is to be demolished, despite demonstrations by environmentalists, to make way for the mine to expand.

Thunberg, who has been one of the key voices in the anti-climate change movement in recent years, was seen laughing as two police officers in riot gear carried her away this afternoon. 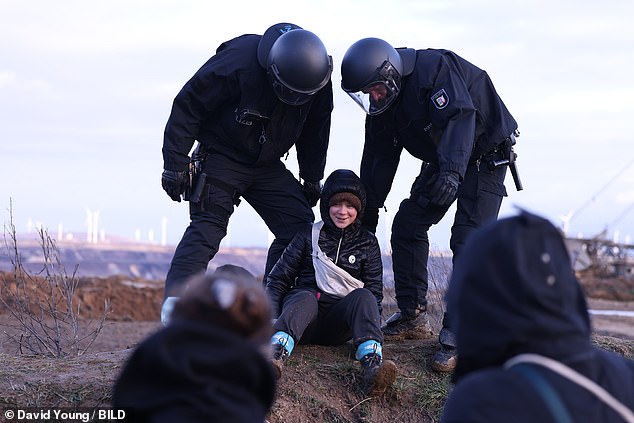 Greta Thunberg smiles as she is surrounded by two police officers in Lutzerath, Germany today

The 20-year-old was forcibly removed by police after he failed to comply with protesters’ calls to clear the area, according to German newspaper Bild.

She joined around 70 protesters at the site today, with the newspaper claiming they ran across a field near the mine to disrupt operations.

In the past few days, there have been several protests with clashes between demonstrators and the police on the site near the western German city of Erkelenz.

Activists have occupied the village of Lutzerath to halt the mine’s expansion, digging tunnels and building structures to halt progress.

The residents of the village left some time ago after being ordered to leave the country by German courts.

On Wednesday January 11, police were given the green light to remove people from the hamlet, prompting violence.

Protesters have accused police of “sheer violence” while authorities say 70 police officers have been injured in recent days.

The Swedish eco-activist visited the mine to protest against its expansion, which will see the town of Lutzerath demolished

Thunberg, pictured here before being carried away, has urged the federal government to halt plans to expand the mine

In the past few days there have been violent clashes between demonstrators and the police in the mine. PICTURED: A protester locks his eye at a rally yesterday

Protesters lend a helping hand as riot police confront them outside the mine on Saturday, January 14

Smoke billows as eco-activists scuffle with police outside the mine on Saturday, January 14

The action has at times turned into absurd scenes, with videos on social media showing police officers in riot gear getting stuck in thick mud while protesters pelt dirt at them.

One video appears to show a man dressed as a monk taunting the stuck police officers and even knocking one over as they try to get out of the mud.

The mine with the name Garzweiler is one of the largest opencast mines in Europe and is operated by the energy company RWE. It is an important source of lignite used in coal-fired power plants.

Demonstrators gather outside the coal mine in preparation for a confrontation with police on Saturday, January 14

Protesters gather in a field next to the mine on Saturday, January 14, as a giant mining rig looms in the background

Thunberg had visited the town on Friday January 13, where she said Germany would “embarrass itself” by expanding the mine. DW News reports.

“I find it absolutely absurd that this is happening in 2023,” she said.

“The most effective people are clear, the science is clear, we need to keep the carbon in the ground.

“When governments and corporations act like this, actively destroying the environment and putting countless people at risk, people step up.

“This is just part of a global climate movement and we stand together in solidarity.”

The German government had announced plans to phase out coal by 2030, the Sun reports, but has since changed course after Russia’s invasion of Ukraine forced it to reconsider its energy policies.

https://www.dailymail.co.uk/news/article-11637821/Greta-Thunberg-carried-away-police-demo-German-village-razed-make-way-mine.html?ns_mchannel=rss&ns_campaign=1490&ito=1490 Greta Thunberg was carried away by police at a demo in a German village destroyed to make way for mine