According to a study, more than half of trans women who have “bottom” surgery years later experience pain so severe that they need medical attention.

Up to a third of patients continued to have difficulty using the toilet or suffered from sexual problems 12 months after surgery, leading patients with a surgically created vagina to switch from male to female.

Researchers at Women’s College Hospital (WCH) in Ontario, Canada, analyzed the medical records of 80 patients who were treated at the clinic between three months and five years after surgery.

Activists say the results show that complex surgeries like vaginoplasty often carry risks that patients are unaware of — at a time when the number of sex-reconstruction surgeries in the US and Canada has risen dramatically. 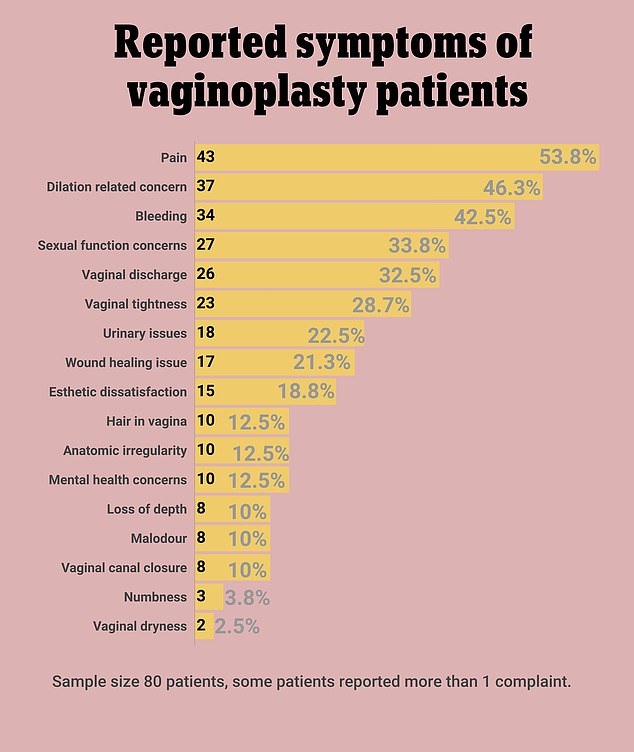 Of the 80 trans women included in the Canadian study, nearly 54% reported persistent pain up to two years after their vaginoplasty. Many had more than one symptom, including vaginal dryness, numbness, foul odor, and trouble healing wounds

Research from October showed that the number of patients going under the knife increased more than 150-fold between 2010 and 2018.

Reduced stigma and increased awareness of transgender issues are believed to have contributed to this increase.

In the latest study, Canadian researchers examined the medical records of patients treated at WCH’s newly opened Postoperative Care Clinic between 2018 and 2020.

All 80 patients had the original vaginoplasty procedure outside the Women’s College health care system but had symptoms that required follow-up care.

Some had traveled as far as India and Thailand for surgery, which the researchers say could explain the relatively high incidence of medical conditions.

Serious side effects were much less common, but 12 cases — or 15 percent — involved vaginal stenosis, the narrowing and shortening of the vagina.

In two other cases, the patients had serious infections around the surgical site, and two others were hospitalized with mental health problems.

A total of 15 patients (18.8 percent) also told the clinic that they were dissatisfied with the appearance of their new vulva and wanted a cosmetic makeover.

Most complaints of persistent pain were treatable with topical medications or more regular check-ups.

Despite being classified as “minor” on medical records, many of these symptoms emerged The study emphasized the potential to grow into much more serious difficulties if patients had not sought treatment.

For this reason, “surgical centers should provide ongoing postoperative care, particularly in the first year after surgery,” the researchers urged.

This is especially important given the procedure’s increasing popularity in recent years and its high cost, which can push those who want the surgery to cheaper and less well-regulated surgeons abroad.

The map above shows the population of transgender adults and children across America in 2020, according to the Williams Institute at the University of California, Los Angeles. The estimate for children aged 13 to 17 has doubled since 2017. It shows that the highest population is in the southern states, followed by those along the east coast

Buttock surgeries like vaginoplasty and phalloplasty — genital reconstructions that women undergo when they transition to men — cost about $25,000.

“The reason there are so many problems is because this is an incredibly difficult operation. Young people at risk need to know about the challenges they face post-surgery, but few of them know.”

In recent years, more and more people who have dropped out – i.e. those who regret their decision to switch and later reverse it – have spoken out about medical side effects of the procedures that they were not previously made aware of.

One such dropout named Shape Shifter claimed he regretted his mastectomy and vaginoplasty after they led to fistulas and other painful outcomes. He says he realized he was just a gay man who liked to show off his feminine side and started to withdraw.

A Massachusetts-based detransitioner known as the Shape Shifter transitioned from male to female but encountered appalling medical problems. He has since retired and identified as a gay man with a feminine appearance

The latest study was published in the journal Neurourology and Urodynamics.

In Canada, the first country to collect and publish gender diversity data from a national census, 100,815 transgender people make up 0.33 percent of those aged 15 and over.

There are approximately 1.6 million transgender and non-binary adults in the US, accounting for approximately 0.5 percent of the adult population.

Gender-specific care for adults and adolescents in the United States can involve a range of medical, behavioral, and social changes, as well as surgical interventions.

In adolescents who have not yet reached puberty, anti-puberty drugs can suppress the release of the sex hormones testosterone and estrogen, stopping the development of secondary sex characteristics such as breast and facial hair.

Whether or not initial puberty was blocked, trans adults and adolescents can also begin hormone therapy, which essentially induces puberty in their gender identity. These hormones can be taken as pills, patches, and gels, and are taken continuously throughout adulthood or until desired physical characteristics are achieved.

Surgical options include facial, breast, and genital alterations and are generally the last step in the transition process.

According to the World Professional Association for Transgender Health, anyone considering butt surgery is recommended to have met certain criteria, such as: B.: reaching adulthood at his location; have persistent, diagnosed gender dysphoria; have the ability to make an informed decision; and completing 12 months of hormone therapy while living the congruent gender identity.

Vaginoplasty – the procedure patients undergo in the new study – is a particularly invasive procedure that requires surgery to remove the penis and testicles and create a functioning vagina.

The most common form of vaginoplasty is penile inversion, in which skin removed from the penis is everted to form a pouch and inserted into a cavity created between the urethra and rectum. The urethra is then partially removed, trimmed, and repositioned.

The operation usually takes between two and five hours and is performed under general anesthesia.

For female-to-male genital reconstruction, doctors can construct a penis using a flap of skin, fat, nerve, and artery, usually taken from the arm or thigh, and transplant it into the groin. In some cases, surgeons lengthen the urethra to allow urination from the tip of the penis or add testicular implants and an erectile device.

https://www.dailymail.co.uk/health/article-11629421/Half-trans-surgery-patients-suffer-extreme-pain-sexual-issues-years-later.html?ns_mchannel=rss&ns_campaign=1490&ito=1490 Half of the trans operation patients suffer from extreme pain and sexual problems years later

Did a woman give birth at an Arctic Monkeys concert in Sydney?