The brother of a 16-year-old boy who died of stab wounds after a fight with another teenager in a car park has paid tribute to him and his “cheeky smile”.

Harley Barfield, 16, was stabbed to death just after 3pm on Monday in a Strasbourg Square car park near his home in Haverhill, Suffolk.

He fought for his life in intensive care for almost two days before dying at the Royal Papworth Hospital near Cambridge on Wednesday.

A 16-year-old boy, whose name cannot be released for legal reasons, was charged with murder on Wednesday night and was remanded in custody by Ipswich magistrates today. 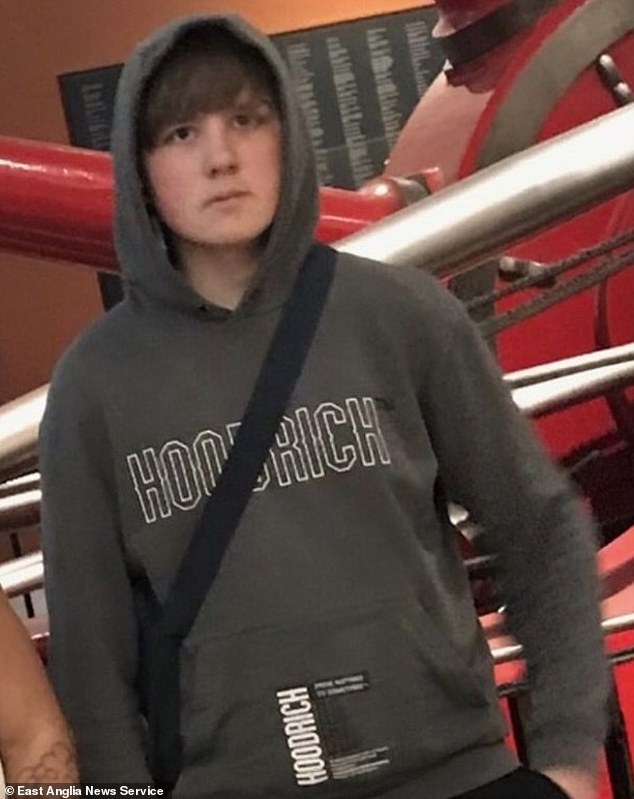 Harley Barfield (pictured), 16, was stabbed to death just after 3pm on Monday in a Strasbourg Square car park near his home in Haverhill, Suffolk

Harley’s brother Jack Reynolds paid tribute to him in an emotional Facebook post today, saying: “My little brother. My heart is broken and I’m at a loss for words.

“How I wish I could hold you in my arms and protect you like that again. You were so loved by all of us and your laughter was contagious.

“Your cheeky smile and the way you looked after everyone filled us all with such pride and you grew into everything I could have hoped for.

“You will never be forgotten and will always be revered by all of us. Your fight to the end only proves what a strong young man you were and you were taken from us far too soon.

Harley’s mother, Bernice Jaggard, has yet to comment publicly other than thanking friends for their support on social media.

Her son was first taken to Addenbrooke’s Hospital in Cambridge by ambulance after being injured in what police described as a “teenage fight”.

He was transferred to the nearby Royal Papworth Hospital in critical condition before dying on Wednesday, prompting police to open a murder investigation.

The 16-year-old Haverhill-area boy who has been charged with murder is now set to appear at Ipswich Crown Court.

After Harley’s death, he was later arrested again on suspicion of murder.

Paramedics had previously struggled in a housing development parking lot to save Harley’s life. Police confirmed an ambulance was also called.

A statement from Suffolk Police said: “An altercation is said to have taken place between two teenagers in which one of them was stabbed.

“The suspect then fled the scene and is believed to have run off towards Millfields Way.

“The teenager who was stabbed can now be identified by police as Harley Barfield from Haverhill.

“Harley was initially taken to Addenbrooke’s Hospital for treatment before being transferred to the Royal Papworth Hospital. Despite the best efforts of the medical staff and Harley’s valiant resistance, he sadly passed away this morning, Wednesday 11th January.

“A 16-year-old boy from the Haverhill area was arrested shortly after the incident on suspicion of attempted murder.”

The police statement added: “Detectives understand that the victim and suspect were known to each other and as such this is being treated as an isolated incident with no major threat to the public.

“Harley’s family and some key witnesses continue to be assisted by specially trained liaison officers. The family has asked us to pass on their thanks to everyone who has sent them messages of support but kindly asks not to contact them at this time.’

The police were there on Monday evening. A 16-year-old boy from the Haverhill area was arrested shortly after the incident on suspicion of attempted murder

Coroners in white suits were seen searching the scene for evidence on Tuesday, but the police cordon around the car park has now been lifted.

Piles of flowers have since been left at the scene by well-wishers.

A Gofundme appeal to pay for Harley’s funeral expenses has raised almost £3,000 so far.

Detectives want to speak to any witnesses and anyone else who saw anything suspicious around Strasbourg Square, Ingham Road or Millfields Way, the A143 or the High Street in Haverhill between 2.30pm and 3.45pm Monday .

They are also attractive to anyone who may have video footage on a cellphone or may have seen videos circulating on social media or shared in messaging groups.

Drivers with dash cams in their vehicles who were driving in the area at the time are asked to review the footage for potentially relevant material.

Anyone with information is asked to contact the Major Investigation Team, preferably via the online portal or the Suffolk Police Department website or by telephone on 101 quoting reference: 1605/23.

Alternatively, the independent charity Crimestoppers can be contacted 100% anonymously on 0800 555 111 or via their online form: www.crimestoppers-uk.org