‘Grab your bean burrito and go… this isn’t India’: The 37-year-old thug is arrested after a racist rant in which he used the N-word against a Hindu man for not eating beef from Taco Bell in California got

A California man has been charged with hate crimes after he was filmed racially insulting a man in Taco Bell and yelling at him, “This isn’t India.”

He is seen confronting Jayaraman and hurling insults, calling him a “filthy Hindu”, repeatedly using the N-word and saying Jayaraman is a vegetarian.

Tejinder, who lists his ethnicity as “Asian/Indian” in loading documents, was filmed saying, “B**** that’s not India! You screwed up India and now you’re screwing up America.’ 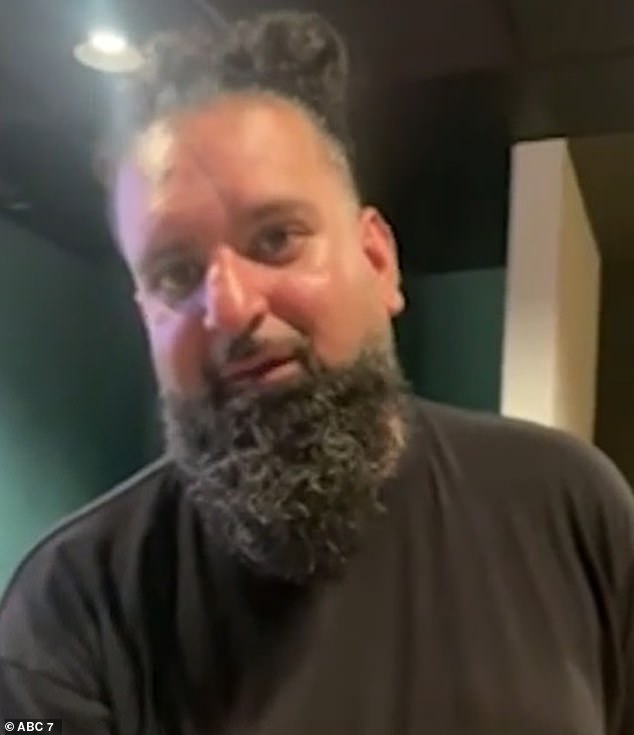 Singh Tejinder, 37, of Union City, was charged with hate crimes after the Aug. 21 attack

Krishnan Jayaraman was singled out by Tejinder, racially abused and spat on

Tejinder said to him, “You’re disgusting, dog. you look evil Don’t come out in public like that again.’

Jayaraman called the police and waited inside so as not to leave and cause a confrontation.

He said he was scared of the incident and upset when he learned his attacker’s ethnicity.

“I was scared, to be honest,” he told NBC News.

“I was angry on the one hand, but I was scared, what if this guy gets too aggressive and then comes after me?”

Tejinder insulted and berated Jayaraman for over eight minutes, once waving a handful of dollars

Tejinder was charged Monday with hate crimes involving violation of civil rights, assault and disturbance of the peace through abusive language, the Fremont Police Department said.

Taco Bell said in a statement that it was aware of the incident, calling the actions in the video “troubling, disturbing and not consistent with the brand’s inclusive values ​​of respecting and welcoming customers of all backgrounds.”

MAFS Australia: Liam Cooper gets jizzed widely in the face