To give holidaymakers and visitors to Europe a boost this summer, Brits will avoid even longer waits at border controls as the EU announces a delay in the planned implementation of stricter rules, including fingerprint checks.

The EU was due to introduce new checks in May this year, including four fingerprint scans and a photo of newcomers to the EU.

However, this week it was confirmed that the new entry and exit system (EES) has been postponed until at least the end of the year.

This is the second delay, having previously been postponed by a year and originally scheduled for 2022. 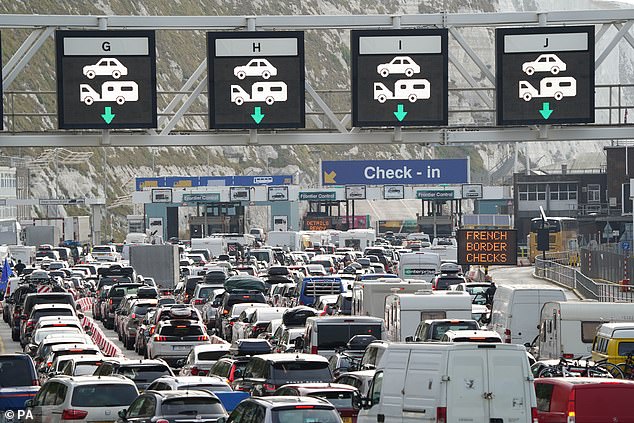 In October, the Port of Dover warned the new controls could take up to 10 minutes per car traveling from the UK to France (stock image)

It will be good news for many Brits as the number of people traveling to Europe continues to rise since coronavirus restrictions around the world ended, reports The Telegraph.

In October, the Port of Dover warned that checks could take up to 10 minutes per car going from the UK to France.

The new entry system will require all non-EU arrivals – including post-Brexit Brits – to have four fingerprints scanned and a photograph taken.

European nations warned that checks on arrival in the EU could take up to four times longer than the current system.

The International Air Transport Association, which represents 300 airlines, warned there are currently “open issues” that need to be resolved before they can be rolled out.

In a statement on the association’s website, a spokesman said: “The aviation industry is fully behind the deployment of the EES and is committed to working with the EU and national authorities for a successful implementation.

“However, there are a number of issues that need to be addressed to ensure a smooth rollout and smooth operation of the new system so that passengers are not faced with any disruption.

“Postponing implementation until after the busy summer of 2023 will give airlines, airports, the EU and national authorities the opportunity to resolve these issues and ensure the system is fully tested.

“We therefore urge all stakeholders to make the best use of the additional time now available to address the outstanding issues and ensure sufficient resources are allocated for rollout.”

In October, the Port of Dover warned of “significant and prolonged disruption for a very long time”.

British nationals are required to provide four fingerprints and one photograph every three years as part of the scheme (Image: fingerprint scanner, stock image)

Dover bosses say passengers without an EU passport could take up to 10 minutes per vehicle to screen them, compared to the current average of 90 seconds it takes to wave cars through.

The new rules apply to ports, airports and other border checkpoints for travelers arriving from outside the EU, but Dover and the Eurostar are likely to see the biggest queues.

Logistics UK warned the new system could result in 19-mile traffic jams in Kent and far worse gridlock scenes than this year.

Dover chief executive Doug Bannister told MPs on the Transport Committee in October: “It’s going to have a bigger impact on families looking to go abroad next summer.

“We’ve heard that there might be technology that’s like an iPad with handles to enroll fingerprints. But we haven’t tried it. How do you run this around a car? What happens if a child sleeps in the back seat?

“What if it’s a dark, stormy night and the lighting isn’t adequate? We didn’t test any of that.’

He added: “We have to see what the technology will be, we need sufficient time to test, test and train this technology before implementation.”

Mr Bannister said: ‘If [new checks] occur in the worst possible way, which we fear will occur, there will be significant and prolonged disruption for a very long time.’

Committee chair Huw Merriman said it was “bizarre and unacceptable” that no testing or trial had taken place.

The system is similar to that in the US, where tourists are required to provide personal information that is checked against databases before the permit is granted.

It would replace passport stamping, but it’s believed it will make wait times at border checkpoints much longer.

According to the UK government, travelers will scan their passports as usual, but will then be required to provide fingerprints and a photograph when entering a country for the first time under the scheme.

This needs to be repeated every three years as a person’s data is only stored in the system for that long.

Travelers arriving in all EU member states except Ireland and Cyprus, as well as Norway, Iceland, Switzerland and Lichtenstein will be affected.

Lizzo wants to "show more belly buttons" in a white lingerie set from her Yitty line.