Brendan Fraser has been hailed a comeback king after his new film The Whale opened to a standing ovation at the Venice Film Festival.

Receiving four and five-star reviews across the board, critics hailed the Indiana-born actor for a ‘sensational’ comeback following a quiet period in his career.

After battling with depression following a claim of sexual assault and being in and out of hospital for several health complaints, Fraser’s role in The Whale has catapulted him back into the limelight – and is already generating Oscars buzz.

Variety reported the 53-year-old star, who attended the premiere with his new beau Jeanne Moore, was reduced to tears after receiving a six-minute standing ovation at the close of the film at the Venice Film Festival. 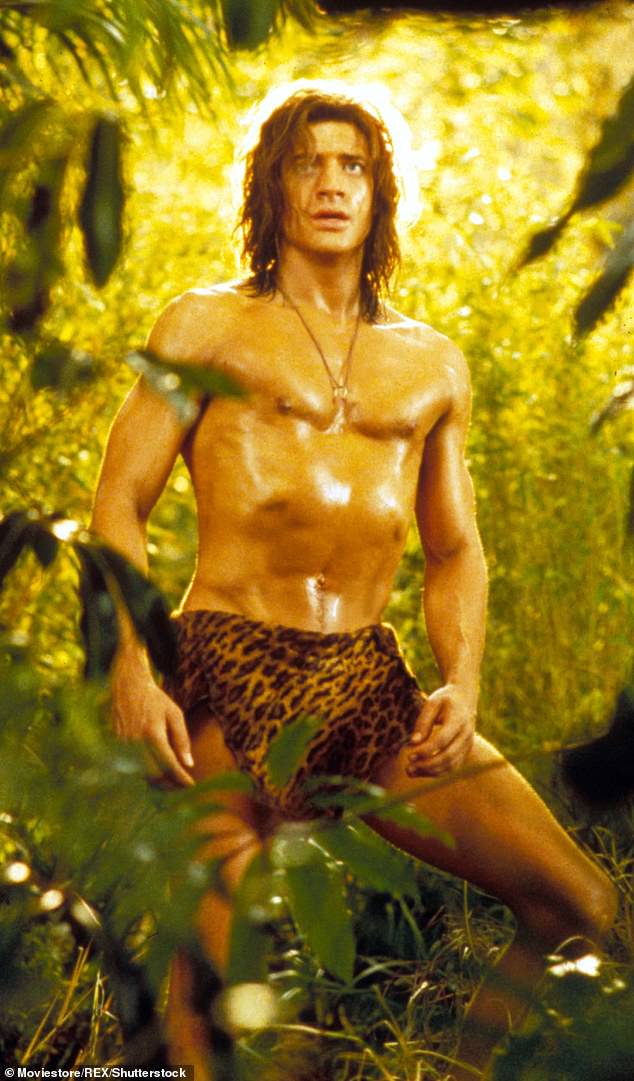 Brendan Fraser, now 53, rose to fame in the 1990s after starring in George of the Jungle as a hunky Tarzan-like figure with a chiseled physique

In 1999 Fraser starred alongside Rachel Weisz in blockbuster The Mummy, which became a trilogy spanning almost a decade

After landing a role of prison guard John Gunther in the third season of The Affair, Fraser concerned fans who said he appeared ‘sad’ in an interview with AOL about the production. Later, he explained his mother had sadly died from cancer just four days earlier

Fraser looks virtually unrecognizable in The Whale, for which he donned a fatsuit to play a 600lb English literature lecturer

Fraser, pictured with his girlfriend Jeanne Moore at the Venice International Film Festival on Sunday evening, is said to have been reduced to tears by the standing ovation he received

Fraser donned a fat suit to play the role of a 600lb recluse called Charlie who is barely able to walk due to his size.

Starring alongside Stranger Things’ Sadie Sink who plays his 17-year-old daughter Ellie, Fraser’s performance was described as ‘grossly manipulative’ by The Independent.

After it was debuted at the Venice Film Festival, the actor was said to have been reduced to tears by the audience’s standing ovation.

As his performance has already generated Oscar buzz, the once familiar face on our big screens whose star appeared to fade during the last decade is poised for a triumphant comeback.

After making his film debut as a sailor in 1991 film Dogfight alongside River Phoenix, Fraser’s big break came the following year in Encino Man.

He played the character of Link, a caveman who had been frozen for centuries and is thawed by two high school students who teach him about modern life.

Fraser pictured alongside Dominic West in The Affair, 2016, where he plays cruel prison guard John Gunther

Fraser pictured with his ex-wife, Afton Smith, with whom he shares three children, in 1999. The pair divorced in 2007

Following the success of the film, he was cast in children’s favourite film franchises George of the Jungle and The Mummy.

His unbelievably chiseled physique earnt him a position as a Hollywood heartthrob as he thrashed around the sets performing stunts in high-action roles.

But Fraser revealed in a later interview the toll the stunts had taken on his body.

He told GQ in 2018 that when he filmed the third installment in The Mummy franchise, he was being taped up and was icing injuries in between takes.

After rising to fame through the action-packed films, Fraser described his buff physique as resembling ‘a walking steak’. Pictured at the Venice International Film Festival this month

Speaking from his home in Bedford, New York, he said the physical toll of his roles made him feel like a workhorse from the Orwell novel Animal Farm.

After rising to fame through the action-packed films, Fraser described his buff physique as resembling ‘a walking steak’.

However, in the same interview the actor revealed he believed he had been blacklisted from Hollywood after he claimed he had been sexually assaulted by the former president of the Hollywood Foreign Press Association, Philip Berk, in 2003.

Fraser claimed he was leaving a luncheon hosted by the HFPA at the Beverly Hills Hotel in Hollywood when Berk shook his hand.

Fraser at the ‘Trust’ season premier in Los Angeles, in 2018

Fraser said: ‘His left hand reaches around, grabs my a** cheek, and one of his fingers touches me in the taint. And he starts moving it around.’

He added: ‘I felt ill. I felt like a little kid. I felt like there was a ball in my throat. I thought I was going to cry.’

Fraser claimed he was able to remove Berk’s hand before running out of the hotel and going straight home. He told his then wife, Afton Smith, about the incident but never made it public.

Instead, his reps asked Berk for a written apology, which he provided, but did not admit any wrongdoing.

Speaking to GQ about the claims, Berk acknowledged he had written a letter of apology to Fraser but insisted he had not done anything wrong and dismissed Fraser’s account as ‘a total fabrication’.

After Fraser reported the claim to the HFPA he said he believed he may have been ‘blacklisted’ and was rarely invited back to the Golden Globe awards.

Fraser said the incident had caused him to ‘retreat’ as he spiraled into depression.

He described feeling ‘not worthy’ as the decade wore on, leading him to take roles he was less proud of. Meanwhile, his marriage was also falling apart.

Receiving four and five-star reviews across the board, critics hailed the Indiana-born actor for a ‘sensational’ comeback following a quiet period in his career

After battling with depression following a claim of sexual assault and being in and out of hospital for several health complaints, Fraser’s role in The Whale has catapulted him back into the limelight

He divorced Afton Smith in 2007 after nine years of marriage and three sons together, Griffin, Leland and Holden. As part of the settlement, he was ordered to pay $50,000 a month in spousal support.

However in 2013 he sought an amendment to the agreement asking to pay less, claiming he wasn’t earning the same enormous paycheques he had received in the 1990s during his heyday and couldn’t afford the payments.

In 2016, his career picked up when he was cast in Showtime drama The Affair, starring Dominic West and Ruth Wilson.

Fraser played cruel prison guard John Gunther in the third season of the show – although the audience is unsure whether or not he is real or a figment of West’s imagination.

While promoting the role in 2016, Fraser sat down for an interview with AOL – but his demeanour during the chat raised alarm with his fans.

As he stumbled over his words and appeared somewhat spaced out, people began to worry he was ‘depressed’.

However Fraser later revealed his mother had passed away from cancer just four days before he filmed the interview.

He said he hadn’t done any press for a role in a long time and added he was ‘in mourning’ when the interview took place.

By 2018 Fraser’s career appeared to be back on track as he starred in FX series Trust alongside Hollywood heavyweights Donald Sutherland and Hilary Swank.

He plays James Fletcher Chase, a former CIA agent who was hired by billionaire J. Paul Getty in 1973 to find Getty’s kidnapped grandson.

After the series debuted, Vox reported it could be the beginning of the ‘Brendan Fraser renaissance’ – and as rumours swirl Fraser may be in line for several awards following his performance in The Whale, that prophecy may have come true.

https://www.dailymail.co.uk/femail/article-11180713/How-Brendan-Fraser-rebuilt-career-generate-Oscar-buzz-new-film-Whale.html?ns_mchannel=rss&ns_campaign=1490&ito=1490 How Brendan Fraser rebuilt his career to generate Oscar buzz in new film The Whale

Pranksters target Liz Truss' Wikipedia and swap their photos before the site is "banned."

Cowboys owner Jerry Jones, 79, admitted to police that he was NOT wearing a seat belt when he hit a car