Militant unions are wreaking havoc across Europe while workers are being ushered from their jobs onto the streets.

Despite the ongoing strikes in the UK, which have seen some form of strike almost every day for the past month, and more strikes by the NHS, teachers and rail are planned for the coming weeks, the chaos is not unique to Britain.

From a nationwide strike in France over pension reform to union strikes in Italy and Spain, industrial action is sweeping across European economies.

Unions are taking workers out in droves to demand better wages and working conditions. 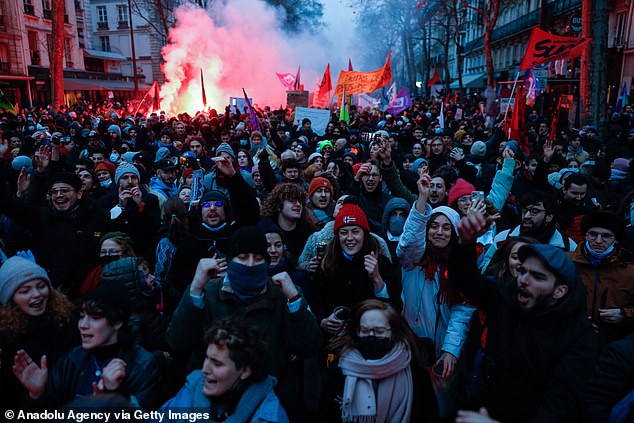 People gather in Paris, France on January 19, 2023 to demonstrate against pension reform

Nationwide strikes are taking place in France to protest President Macron’s government plans to reform pensions and raise the retirement age from 62 to 64.

More than a million people demonstrated in France yesterday as part of the national workers’ protest, disrupting public transport, schools and much of the country’s public services.

Some of the strikers clashed with the police, with the worst trouble in Paris taking place around Bastille Square. Protesters hurled bottles, trash cans and smoke grenades at police, who responded with tear gas and urged the rioters to be dispersed.

The far-left union CGT said there were more than two million people at protests across France, and 400,000 in Paris alone.

Militant unions have planned another day of strikes for January 31st.

The current retirement age of 62 in France is among the lowest in the EU and workers would have to contribute an additional two years to receive a full pension under the new plans.

Doctors and other health sector workers, who have been on strike for almost two months, gather in a demonstration in front of the Ministry of Health in Madrid, Spain on January 15, 2023 to demand an increase in wages and the improvement of their working conditions

Chaos has also gripped Spain, where some healthcare workers have been on strike since November.

Just like in the UK, the disruptions to healthcare services are causing patients’ appointments to be canceled while industrial action continues.

During January, the already protracted strikes intensified as thousands of protesters chanting slogans poured through the streets of Madrid.

Unions have urged the conservative Spanish government to increase investment in the health sector and cut plans to privatize parts of the system in favor of universal service.

The militant unions have announced more dates across the country that healthcare workers will retire later this month.

Strikes are sweeping across sectors in Spain, with industrial action in aviation and travel also hitting the Spanish economy hard.

Despite a year of talks, hundreds of air traffic controllers will go on strike for five days, shutting down the tourism sector at 16 airports in Spain.

With tourism being such a significant part of the country’s economy, the ongoing labor dispute is set to wreak even more havoc in Spain.

Thousands of teachers from all over the country demonstrate after a partial strike lasting several days on January 14, 2023 at the Praca do Comercio in Lisbon to demand improved working conditions and higher salaries

Strikes have also increased across the border in Portugal.

This week unions led teachers out of classrooms to begin 18 days of industrial action. The strikes will continue on weekdays until February 8th.

The teachers of the STOP union have been on strike since mid-December.

With schoolchildren left without their teachers, unions are demanding that the Portuguese government abandon its education policy and remove the Minister of Education, while reducing teachers’ workloads and increasing wages.

Demonstrators flee tear gas as they clash with riot police during a demonstration to mark a 24-hour general strike in Athens, Greece, November 9, 2022

France’s violent nationwide strike reflected some of the chaos that gripped Greece in November.

Strikes brought Greece to a standstill as tens of thousands took to the streets to demand higher wages.

This was the second nationwide strike in the past year, as angry protesters led by militant unions marched on the Athens Parliament. The demonstration has been described as the largest since the Greek sovereign debt crisis.

Some of the strikers clashed with riot police as they threw petrol bombs at officers.

Hundreds of workers of the former Ilva in Taranto protest in front of the Enterprise Ministry on January 19, 2023 for answers to the Acciaierie d’Italia group

Instead of the nationwide strikes in France and Greece, industrial action across Italy has remained local.

Instead of significant disruption at the national level, local strikes have proved difficult.

Rome’s public transport system brought the capital to a standstill while hundreds of steelworkers in Taranto went on strike over layoffs at the partially owned state steel company.