If you dream of earning a six-figure salary, you’d better start posting more on Instagram.

Social media stars are now making more per hour than lawyers, accountants and software developers – and those in the UK are the highest paid in the world, research has found.

According to a new report from Adobe, UK influencers make an average hourly wage of £117.48 – the equivalent of £137,000 a year if they were working full-time. 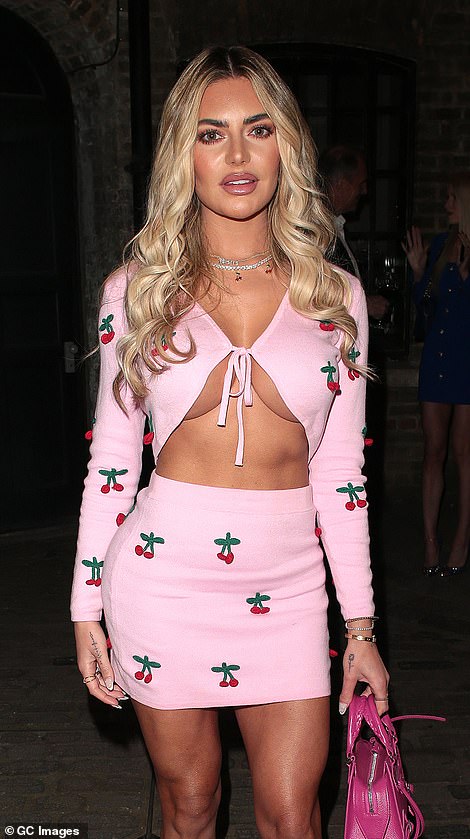 Ex-Love Island star Megan Barton-Hanson, 28, (left, in March) is said to be making up to £800,000 a month from her racy OnlyFans posts, while Love Island runner-up Molly-Mae Hague, 23, (right, in Positano, Italy, in June) has a net worth of £6million

Influencer Zoe Sugg, also known as Zoella, has more than 9million Instagram followers and an estimated net worth of £2.5million

It turned out that the more time creators spend sharing content, the happier they feel.

The study comes as some influencers are under pressure to scale back online posts after they were found to be “annoying” people by flaunting a lavish lifestyle while the cost of living is rising.

The average UK influencer salary from the Adobe report is based on earning £117.48 per hour.

All other salaries are top earnings for the most experienced workers in each position, according to the UK Government’s National Careers Service.

Love Island runner-up Molly-Mae Hague, 23, with 6.4million Instagram followers, sparked controversy for saying “everybody has the same 24 hours in a day” when discussing her success.

Miss Hague, creative director of fast fashion brand Pretty Little Thing, has a net worth of £6million – but the comment was branded “tone deaf”.

Former Love Island star Megan Barton-Hanson, 28, is said to be making up to £800,000 a month from her racy OnlyFans posts.

The model joined the X-rated subscription site in March 2020 after feeling “bored” in lockdown. She is also said to have made a fortune selling lingerie.

Another influencer, Zoe Sugg, aka Zoella, has more than nine million Instagram followers and is estimated to have a net worth of £2.5million.

Brighton-based British TikTok superstar Jack Joseph, who has more than three million followers on the platform, said “staying true to yourself” is the key to success.

In response to Adobe’s findings, he said, “It’s great to see influencers being taken seriously and more developers wanting to make it a full-time career.

“Social media is an evolving industry, which is why I’ve learned that it’s important to be prepared to adapt and edit your content to fit different platforms, what’s trending, and what your audience loves .”

The study found that one in four Britons describe themselves as some kind of ‘content creator’, which equates to 16.5 million creators in the UK.

The study found that for creators, and influencers in particular, using or creating social content is ranked as a top mental health necessity

According to the study, increased participation is associated with more positive sentiment in all countries

But for most, content creation remains a side hustle right now, with 65 percent otherwise employed full-time. The report, which surveyed 9,000 online creators, found that influencers earn the most in the UK.

Love Island runner-up Molly-Mae Hague, who has 6.4 million Instagram followers, is considered one of the most successful influencers of her generation.

The 23-year-old, who works with fast fashion brand Pretty Little Thing, now has a net worth of £6million.

The 28-year-old model joined the X-rated subscription site in March 2020 after feeling “bored” during lockdown.

She is also said to have made a fortune selling lingerie.

Multimillionaire YouTuber Zoe Sugg, also known as Zoella, has more than nine million Instagram followers and is estimated to have a net worth of £2.5million.

And those who share content daily or spend 10 or more hours a week creating it say they are the happiest overall.

Half of influencers say using social media or creating social content is more important to their mental health than listening to music (31 percent), exercising (30 percent), and walking in nature (27 percent).

Simon Morris, Vice President of Marketing at Adobe, added: “The growth in the number of developers in the UK and globally is exponential and shows the creative empowerment people now feel to pursue their ambitions and express themselves online.

“There is no doubt that the events of the past two years have affected this pace of growth, signaling that the democratization of creativity is changing where, when, how and why we create and get inspired.

“Creators have the power to shape our economy and culture, and to forge lucrative and successful careers.”

The study comes as barristers in England and Wales are set to go on a continuous strike from today after escalating their dispute with the government over pay.

Members of the Criminal Bar Association (CBA), who went out every two weeks, voted for an indefinite, continuous strike.

Figures from the Justice Department show that more than 6,000 court hearings have been disrupted by the dispute over the terms and fees set by the government for legal counsel’s work.

Lawyers are to receive a 15 per cent fee increase from the end of September and earn £7,000 more a year. But there is trouble, the increase will not be instantaneous and does not apply to backlogs.

Jobs Available: Australians had to work for Dan Murphy