Trumpet was at Citi Field earlier in the week when he performed “Take Me Out To The Ballgame” in front of Mets fans, but he couldn’t perform the song that made him famous among the team’s fans.

He returned on Thursday Australian time and the opportunity presented itself – and the moment lived up to the hype.

Diaz’s appearances in games have become extremely popular with fans, with crowds going wild as soon as the pitcher comes out of the bullpen.

Both Diaz and the Australian musician performed their roles perfectly in front of a packed stadium on Thursday.

Trumpet entered the field from the third-base side in a Mets jersey with Diaz’s No. 39 on it and his own name on the back. He played the sheet music to “Narco,” which fans have come to love, and danced while he performed.

It was a flawless ninth inning for Diaz, who sealed a 2-1 win for the Mets over the Dodgers in front of 41,799 fans. 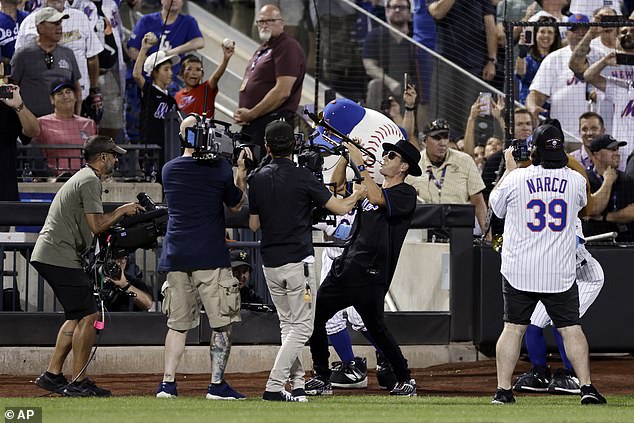 “I tried to look up a little bit as I was running to see what the reaction was from the fans, so I looked up and it was pretty fun,” Diaz said after the game. “I could feel the mood of the fans. They were really excited.’

Mets manager Buck Showalter said, “The pressure to deliver on this part of the order is remarkable. “He’s been doing it for us all year.”

After the win, Trumpet left the stadium to fly to Singapore, but Diaz said the Aussie musician could return to Queens this season.

“He said he was coming back to play in the World Series again,” Diaz said.

Thousands of fans took to social media to post comments.

“This is the coolest thing in esports today,” said one Twitter user.

Timmy Trumpet says he’ll be back to play trumpet again

“The Mets have to hire Timmy Trumpet by the end of October. I’m deadly serious. He has to do this the rest of the way for every gig,” wrote another.

The ex-boyfriend of the 40-year-old lottery winner, who hit a £10,000 monthly jackpot, fears she will take away DOGS