Hull City 0-2 Sheffield United: Oli McBurnie and Sander Berge score to propel the Blades to the top of the Championship table

By Ross Heppenstall For Mailonline

Barely a goalkeeper for two years, Oli McBurnie can’t stop scoring them as Sheffield United returned to the pinnacle of the Championship in style.

Victory away from a tense Yorkshire derby against rising Hull City side showed once again that Paul Heckingbottom’s side can take a beating this season.

The scars of last season’s play-off semi-final defeat by Nottingham Forest are healing and McBurnie is proving to be a key figure in their bid to reach the Premier League. 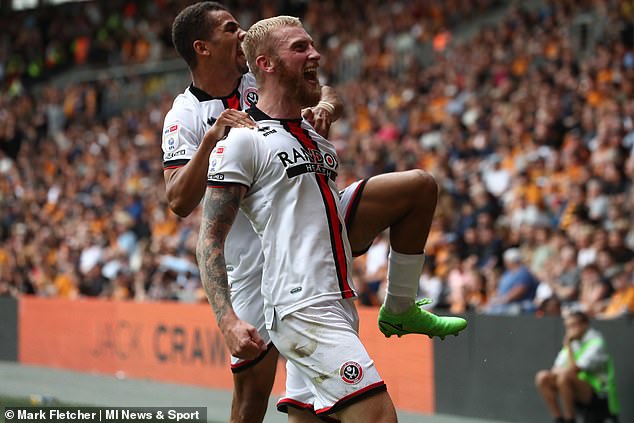 After a difficult two years plagued by injury, illness and poor form, during which he only scored twice, he finally shows why the Blades paid Swansea £20million for him three summers ago.

McBurnie collected a short pass from Max Lowe down the left channel, advancing to the edge of Hull’s box and hitting a powerful, if fairly hopeful, right foot shot.

McBurnie’s imagining his chances was a testament to the confidence running through his veins right now.

Tigers goaltender Matt Ingram should have saved him, but he bounced the ball under him, much to the delight of McBurnie and the traveling hordes.

It was McBurnie’s third goal in as many games and sent Heckingbottom’s team headed back to where they hope to finish the season – at the top of the pile.

With 15 minutes left, Berge got too much space in the host’s 18-yard box and he drove a deflected shot past Ingram.

Heckingbottom has fought hard to keep Berge on deadline day amid interest from Club Brugge and several Premier League clubs.

Keeping him might be United’s best deal this summer and for much of this competition he’s looked a notch above the never-ending industry that typifies the Championship.

“We’re Sheffield United, we’re the best in the league,” was the chant from the noisy away game in front of 20,426 spectators.

United have not lost since an opening-day defeat at Watford and this latest success – after four straight home wins – marked their first win on the road this season.

Shota Arveladze has been proving to be a popular figure with Tigers supporters since being appointed on a two-and-a-half-year deal in January.

After a disappointing end to last season when Hull’s priority was avoiding relegation to League One, the start of the current season has raised hopes of a play-off push.

Crowds turned out to give the Tigers their biggest league attendance since Tottenham visited the Premier League in May 2017.

Hull has changed a lot since then, when Turkish businessman and TV star Acun Ilicali took over the unpopular Allam family in January.

Despite their sparkling start to the season, United always seemed able to switch gears when the opportunities arose, with Berge in the middle of the park dominating the proceedings.

The Blades had issued a warning to their hosts when George Baldock’s superb cross volleyed over the Hull goal from the right.

Moments later, however, they led as McBurnie tried his luck and was suitably rewarded.

Hull settled down and it took a brilliant double save from Wes Foderingham to thwart Hull’s Oscar Estupinan, who shot clean after a counterattack.

United lost Lowe to injury and he was replaced by Chris Basham but Hull lacked a clinical touch in front of goal and continued to spurn the few chances they had.

Victory was assured for United as Iliman Ndiaye deftly created the space to find the advancing mountains in the box and deflected a powerful right foot that ricocheted past Ingram and into the net.

https://www.dailymail.co.uk/sport/football/article-11178685/Hull-City-0-2-Sheffield-United-Oli-McBurnie-Sander-Berge-Blades-Championship.html?ns_mchannel=rss&ns_campaign=1490&ito=1490 Hull City 0-2 Sheffield United: Oli McBurnie and Sander Berge take the Blades to the top of the championship

Valorant Episode 5 Act 2 End Date: When is it?