An elderly man with Parkinson’s was forced to wait in a five-hour line after his flight was canceled, while another man has seen his flight to Ghana delayed four times over the past 10 days amid the busiest Labor Day weekend for travel in three years.

Frustrated flyers are now expressing their anger on Twitter as they wait hours — or sometimes even days — for a new flight after more than 1,000 flights coming into, leaving or traveling within the United States on Sunday were delayed.

Another 127 were canceled completely, according to Flight Aware, which tracks flight delays and cancelations throughout the world.

‘Delta cancelled my elderly parents flight from JFK to London yesterday, one hour before departure,’ one Twitter user wrote, noting that the airline did not announce the cancelation at the gate and directed those who were affected to a help desk, where they had to wait on line for five hours — only to be told they had no more hotel rooms to offer.

‘My dad has Parkinson’s and was forced to wait in a five-hour line in a foreign country without a phone or even an apology,’ she tweeted on Sunday. 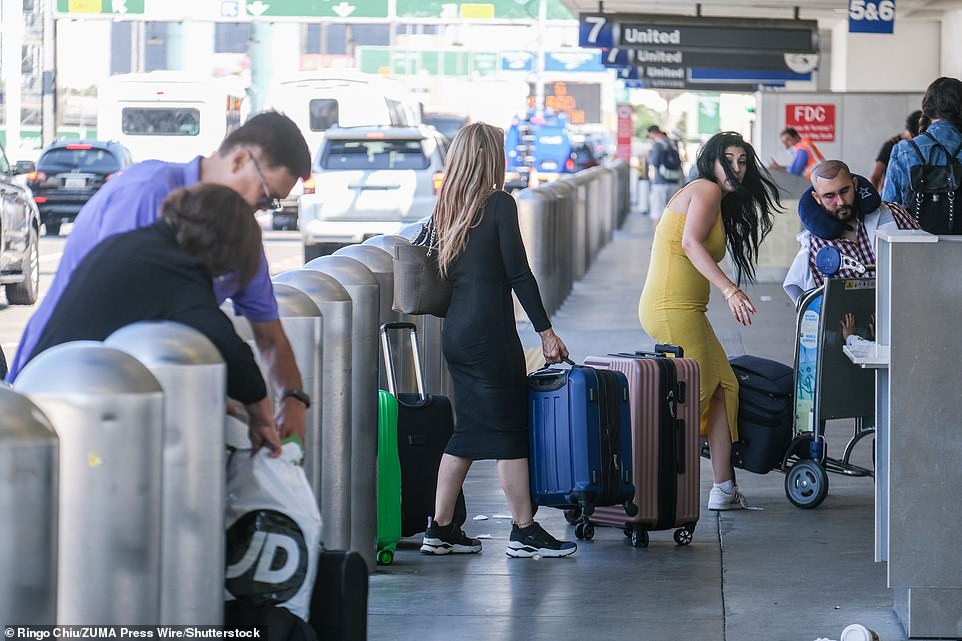 LOS ANGELES, CALIFORNIA: Hurried passengers are seen arriving at the Los Angeles International Airport on Wednesday ahead of the long weekend

A Twitter user told how her elderly father, with Parkinson’s had to wait in line for more than 5 hours after his flight to London from New York City was abruptly canceled

Meanwhile, Nicholas Kralev, the executive director of the Washington International Diplomatic Academy, tweeted that over the past 10 days, his flight from Dulles International Airport in Virginia to Accra, Ghana was delayed four times for more than 12 hours to ‘service the aircraft,’ and another user Twitter user said her international flight was canceled 10 hour before departure.

Sylvie Tongco said she was then ‘rebooked’ on a flight two days later, so she had to call a partner airline to United for a same-day flight, but was provided with one with a connection and ‘worse seats than what we paid.’

And another Twitter user bemoaned how her direct flight from Delta was canceled, and the airline rebooked her on a flight with a layover — but got rid of her business class ticket and now will not allow her into the lounge.

Still, Sunday’s schedule marked a significant improvement from just the day before — when more than 3,600 flights were delayed and 145 were canceled as 1.8 million people passed through Transportation Security Administration check points.

HOUSTON, TEXAS: People are pictured checking in for their flights at George Bush Intercontinental Airport on Friday, ahead of the Labor Day weekend. It is expected to be the fourth-busiest air travel day of the year as travel reaches pre-pandemic levels

The busiest days for air travel were expected to be on the Thursday and Friday before the holiday weekend, and on the Monday of Labor Day, according to travel tracking site Hopper, which estimates around 12.6 million people will flow through U.S. airports between September 1 and September 5.

In fact, the TSA has already reported tat 6.2 million people have passed through their gate between Thursday and Saturday.

To make travel easier over the holiday weekend, the federal Department of Transportation announced on Thursday it had launched an airline customer service dashboard resulting in ‘significant changes’ to all but one of the 10 largest US airlines.

It offers a breakdown of how some of the carriers will help customers with rebooking or offering meal and hotel vouchers if their flight is canceled or delayed.

‘Passengers deserve transparency and clarity on what to expect from an airline when there is a cancelation or disruption,’ Secretary of Transportation Pete Buttigieg said in a statement.

‘This dashboard collects that information in one place, so travelers can easily understand their rights, compare airline practices and make informed decisions.

‘The Department will continue to support passengers and to hold airlines responsible for adhering to their customer obligations,’ he added.

The move comes after Buttigieg told airline executives to clean up their act to avoid more delays and cancelations amid staff shortages.

He had asked them to ‘stress-test’ operations ahead of the July 4 holiday – meaning travel firms could ultimately end up cutting more flights if they realize they’ll have insufficient resources to operate them.

Transportation Secretary Pete Buttigieg, center, announced the launch of a new dashboard on Thursday thatoffers a breakdown of how some of the carriers will help customers with rebooking or offering meal and hotel vouchers if their flight is canceled or delayed. He is pictured awarding a grant in Phoenix, Arizona on August 11

Passengers have been plagued by ongoing flight cancelations and delays throughout the summer, as airlines struggle to meet the high demand for travel while also grappling with pandemic-related pilot shortages following massive layoffs.

The rate of cancelations is now up nearly one-third from the same time in 2019, before the COVID pandemic, and the rate of delayed flights is up nearly one-quarter, according to FOX News.

And the situation is only likely to get worse, as industry officials anticipate a shortage of 12,000 pilots this year because pilots must have 1,500 qualifying flight hours before they can actually take over a plane, according to Forbes.

There is also a shortage of flight schools to accommodate the training process, and pilot salaries and benefits have decreased in recent years.

Additionally, the Federal Air Administration has a mandatory retirement age of 65 for pilots, which also speeds up the retirement date for some.

The pilots that are left are now petitioning for better treatment, claiming the airlines are overworking them to meet the demand for summer travel following the pandemic lull.

On Thursday, off-duty pilots for six airlines picketed at more than a dozen airports across the country in support of improved working conditions and benefits.

The protest was organized by the Air Line Pilots Association, which represents thousands of major US airlines.

‘When ALPA pilots stand shoulder to shoulder in support of shared goals, people notice — our airlines notice,’ the group said in a statement.

‘That’s why on September 1, we’re asking all ALPA pilots to join us for an ALPA-wide informational picket to show the public, our lawmakers and our airlines that all airline pilot stand together in support of the profession-wide goal of improved working conditions and benefits.’

LOS ANGELES, CALIFORNIA: Holiday travelers arrived at Los Angeles International Airport on Wednesday. The airport is expected to be inundated with passengers on the holiday weekend

LOS ANGELES, CALIFORNIA: People checked in to United Airlines at LAX on Wednesday. It is now experiencing delays

LOS ANGELES, CALIFORNIA: Passengers have been plagued by ongoing flight cancelations and delays throughout the summer, as airlines struggle to meet the high demand for travel while also grappling with pandemic-related pilot shortages following massive layoffs

Meanwhile, several airlines have resorted to cutting down on their service, with United Airlines officials announcing earlier this year it would be cutting 12 percent of its domestic flights from Newark airport – where they say ongoing construction has disrupted travel.

‘After the last few weeks of irregular operations in Newark, caused by many factors including airport construction, we reached out to the [Federal Aviation Administration] and reached a waiver allowing us to temporarily adjust our schedule there for the remainder of the summer,’ Jon Roitman, executive vice president and chief operating officer told staff in a memo, according to CNBC.

‘Even though we have the planes pilots, crews and staff to support out Newark schedule, this waiver will allow us to remove about 50 daily departures, which should help minimize excessive delays and improve on-time performance – not only for our customers, but for everyone flying through Newark.’

United is the dominant airline at Newark Liberty International Airport, which is just across the Hudson River from New York City and gets heavy use from people living in and around the city.

Only domestic flights will be reduced, a United spokeswoman said Thursday, adding that United will not drop any destinations from Newark.

Newark is among the nation´s busiest airports and often has the highest number of flight delays. United CEO Scott Kirby has accused other airlines – Spirit and JetBlue in particular – of operating more flights than allowed under federal rules, and said FAA has ‘just let people brazenly break the rules.’