Hunter Biden asked a judge to refuse his estranged four-year-old daughter, who was born to a stripper, from taking his surname, claiming it would rob the child of a “peaceful existence”.

The request was made by the president’s son on Jan. 6, just a few weeks after the child’s mother, Lunden Roberts, filed a name change request for her daughter Navy Joan Roberts.

While Biden claims the name change would harm the child, Roberts said it would benefit her daughter because she is “now synonymous with being well educated, successful, financially astute and politically powerful.”

The Biden family, including Hunter, has reportedly never met Navy, who was born in August 2018 to Roberts, a stripper at a club Hunter used to frequent. 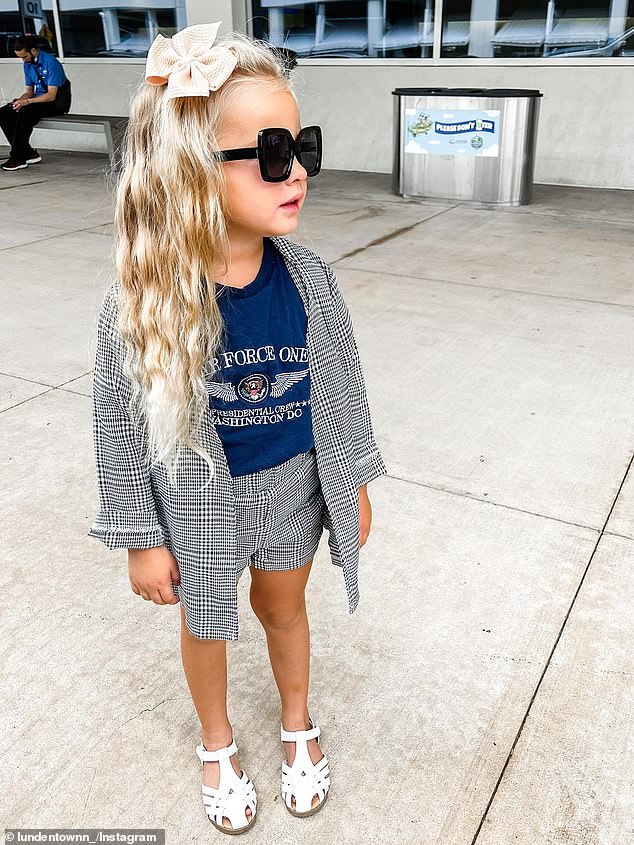 Raised by her mother in Arkansas and bearing a striking resemblance to a young hunter, Navy does not have access to Secret Service protection like the rest of the Bidens

Hunter Biden has asked a judge to bar his estranged four-year-old daughter from taking his last name, saying the name would rob the child of a “peaceful existence.” He is pictured in Malibu on Thursday

Lunden Roberts, 31, who is raising Navy Joan Roberts in Arkansas, filed a petition last month to have her last name changed to Biden, claiming it would benefit her because it “is now synonymous with being well educated, being successful, financially astute and politically powerful’

Last month’s filing noted that Navy remains “estranged” from the Biden family and suggests that this “misconduct or neglect” can be corrected by giving her the Biden name.

But Hunter Biden, who is at the center of a federal investigation into his foreign dealings, is now fighting the petition, arguing the name would do the child a disservice.

Hunter’s attorney filed the motion earlier this month, asking the judge to deny Robert’s motion, arguing that once “the disparagement of the Biden name has not reached its peak, the child should decide for himself.”

Hunter claimed that Roberts’ motivation now is “political warfare” against the Bidens and that this reversed her efforts in late 2019 to remove her daughter’s name and all other identifying information about her from public court records.

On December 27, Roberts asked Circuit Court Judge Holly Meyer to allow the child to take the Biden name and claimed she was staying “estranged” from family and suggests that this “misconduct or neglect” can be corrected by giving her the name.

Hunter Biden, his wife Melissa Cohen and their son Beau Jr. enjoy a day together Thursday at Malibu Park on Cross Creek in Malibu, California

Hunter Biden and his son Beau Jr. had lunch at a picnic table in Malibu Park last week

Hunter feeds his son Beau Jr. french fries while the family eats lunch at the park in Malibu

Hunter and son Beau are spotted having lunch together in Malibu

“To the extent that this is misconduct or neglect, this can be remedied by changing her last name to Biden so that she will be undeniably known to the world as the defendant’s child and a member of the respected Biden family,” Roberts told her filing.

The little girl is raised by her mother in Arkansas. Navy, who bears a striking resemblance to a young hunter, doesn’t have access to Secret Service protection like the rest of the Bidens.

She is Hunter’s fourth of five children, conceived while he was still in a relationship with Hallie Biden, his brother Beau Biden’s widow, whom he began dating after her husband died of brain cancer in 2015.

He is currently married to South African native Melissa Cohen, whom he married a week after meeting and with whom he shares two-year-old Beau – named after his dead brother.

Hunter, 52, initially denied being Navy’s father and said he had “no recollection” of meeting her mother. But a DNA test in 2019 confirmed he was Navy’s father.

They had met at a gentlemen’s club called the Mpire Club in Washington, DC, where Roberts, 31, was performing as “Dallas” at the same time Hunter was dating his older brother’s widow.

After a DNA test proved Hunter was the father, he and Roberts settled for $2.5 million in 2020. Hunter now also pays monthly child support and health care for the girl

Hunter and Roberts met at a gentleman’s club called the Mpire Club in Washington, D.C., where she performed as “Dallas”, at the same time Hunter was dating his older brother’s widow

According to his memoir Beautiful Things, this period of Hunter’s life was filled with heavy drug use and “ramps” of random sex with women who were “hardly the dating type.”

According to his memoir, Beautiful Things, this period in Hunter’s life was marked by heavy drug use and “running rampages” of random sex with women who were “hardly the dating type.”

“I had so little connection with anyone. I was a mess, but a mess I took responsibility for,” he wrote.

After a DNA test proved Hunter was the father, he and Roberts settled for $2.5 million in 2020. Hunter now also pays monthly child support and health care for the girl.

Roberts was reportedly on the payroll of Hunter’s consulting firm for a time before she gave birth to their daughter. In February of this year, Roberts testified before a federal grand jury investigating Hunter for tax fraud and violations of foreign lobbying laws.

The Bidens, including Hunter, President Biden and Jill Biden (pictured), reportedly never met Navy, who was born in August 2018 to Roberts, a stripper at a club Hunter used to frequent

Last September, Hunter asked a court to recalculate his child support payments, arguing he could no longer afford them.

He filed an application citing “a material material change” in his “financial circumstances, including but not limited to his income.”

In the 2019 paternity lawsuit, Hunter had also tried to come by without supporting his beloved child, telling a court he had “significant debts” from his divorce from ex-wife Kathleen.

“I confirm that I am unemployed and have had no monthly income since May 2019,” he wrote.

At the time, he lived in a $12,000-a-month rental in Los Angeles and drove a Porsche Panamera. An analysis first reported by NBC and confirmed by DailyMail.com found that Hunter’s company made $11 million from 2013 to 2018.

In his book, Hunter admitted to burning cash to pay for drugs and partying with strangers who regularly robbed him.

https://www.dailymail.co.uk/news/article-11636079/Hunter-Biden-asks-judge-stop-estranged-daughter-taking-surname.html?ns_mchannel=rss&ns_campaign=1490&ito=1490 Hunter Biden is asking the judge to stop his estranged daughter from taking his last name