Scientists warn of hurricane complacency as August ends with no named storms — the first time in modern history this has happened in a “La Niña year.”

The last named storm to hit the US was Tropical Storm Colin, which made landfall in the Carolinas on July 2.

Meteorologists in May predicted an unusually active 2022 hurricane season — the period from June 1 to November 30.

But the lack of storms is relaxing some — and scientists insist their predictions aren’t wrong just yet.

“No hurricanes midway through the season? The second half is usually very different,” tweeted Dr. Rick Knabb, a hurricane expert at The Weather Channel. 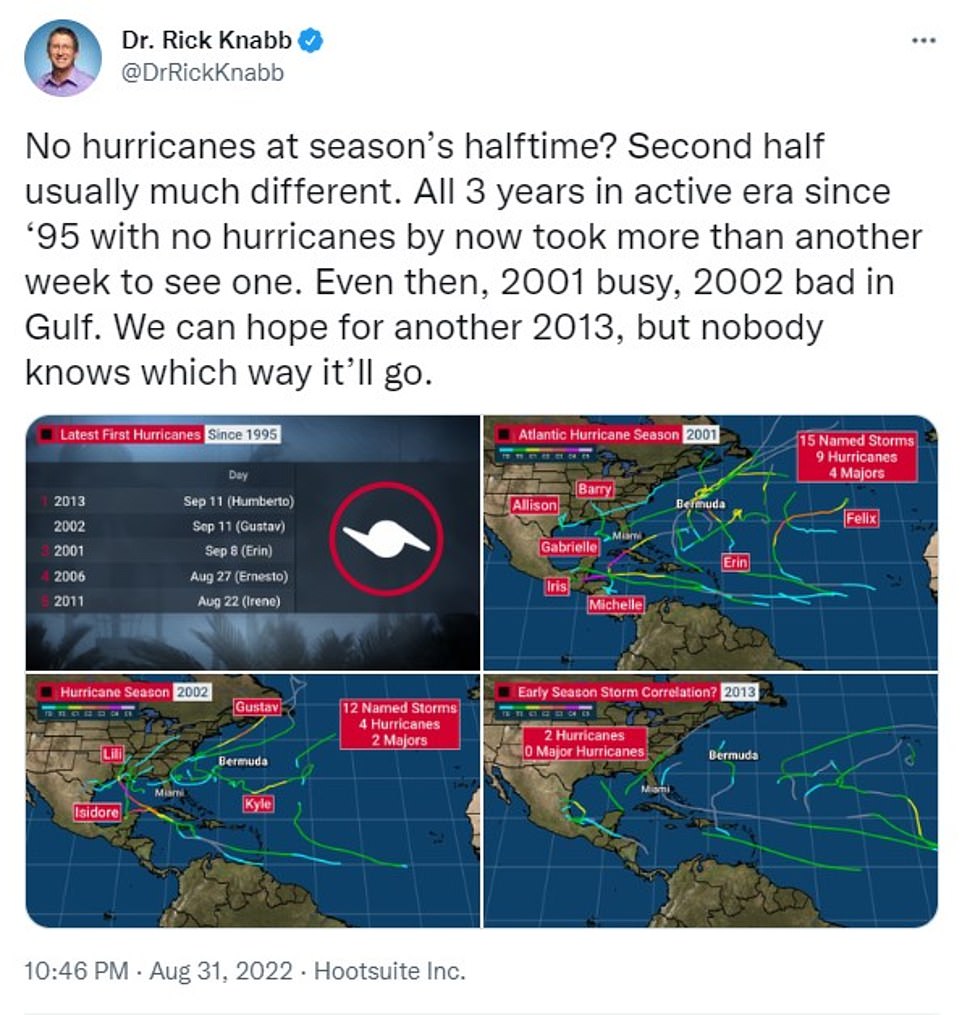 And the National Hurricane Center tweeted Wednesday, “Hurricane season is heating up! NHC monitors 3 areas in the Atlantic basin for tropical development over the next 5 days.’

On May 24, the National Oceanic and Atmospheric Administration (NOAA) announced that it was predicting a particularly intense 2022 season.

They forecast 14 to 21 named storms with winds of 60 km/h or more, of which six to 10 could become hurricanes.

Up to six of those could become major hurricanes, they predicted.

Yet so far the season has seen only three named storms and no hurricanes.

Rescuers are seen in Helmetta, New Jersey after Henri was hit on August 22, 2021

Flooding is slowly receding after Hurricane Ida in Lafitte, Louisiana — about 25 miles south of New Orleans — on September 1, 2021

Philip Klotzbach, a hurricane researcher at Colorado State University, noted that it’s the first time since 1982 that there hasn’t been a single named storm anywhere in the Atlantic between July 3 and late August.

He said one reason for the recent quiet stretch could be stronger-than-normal wind shear — winds rotating at different levels of the atmosphere, halting storm development.

Another observation was an increase in Saharan dust this season, counteracting storm development.

The calm period is even more puzzling as the United Nations weather agency said Wednesday it expects La Niña to last through the end of this year.

La Niña is a natural and cyclical cooling of parts of the equatorial Pacific that changes weather patterns around the world, often leading to more Atlantic hurricanes, less rain and more wildfires.

If La Niña continues for the rest of the year, it will be the first “triple dip” this century – three years in a row that the climate phenomenon has been felt.

It is all the more remarkable that there have been no hurricanes in a La Niña year.

There were no tropical storms or hurricanes in August 1961 and 1997.

Forecasters are currently monitoring three potential storms in the Atlantic.

Three potential storms are being monitored over the Atlantic

Wednesday’s next storm was described by the National Hurricane Center as east of the Leeward Islands, and they estimate there is an 80 percent chance of it becoming a hurricane within five days.

Two more follow: one just northeast of the Cabo Verde Islands, which has a 40 percent chance of becoming a storm in five days, and the third 850 miles west-southwest of the westernmost Azores, with an 80 percent chance that they will intensify a hurricane in the next five days.

On August 29, 2021, Hurricane Ida made landfall near Port Fourchon, Louisiana with sustained winds of 150 mph — setting the state record for the strongest landfall speeds associated with the 1856 Last Island hurricane and Hurricane Laura of 1856 were felt in 2020.

https://www.dailymail.co.uk/news/article-11167747/Hurricane-season-heating-Scientists-urge-Americans-not-complacent.html?ns_mchannel=rss&ns_campaign=1490&ito=1490 “Hurricane season is heating up!” Scientists urge Americans not to be complacent

"They need a new studio"