According to the Chinese government, the most important human right is a comfortable life – and nowhere does it demonstrate its laudable desire to spread a little happiness better than the western province of Xinjiang.

Last week they sent a letter to the United Nations describing this region – home to some 12 million Uyghurs – as a beautiful nirvana where “people of all ethnic groups live happily ever after in peace and contentment.”

Thanks to their noble efforts, they said, everyone in Xinjiang can “enjoy social stability, economic development, cultural prosperity and religious harmony.”

If only this vision were remotely true. But alas, these were the grotesque words of a regime that seems to have adopted George Orwell’s 1984 as a textbook for its twisted rule based on brutality, surveillance and the spreading of lies.

Beijing’s letter was attached to a landmark UN report that, for all its hesitation and weakness, eventually condemned China for “gross human rights abuses” against Muslim minorities in Xinjiang that could amount to crimes against humanity. 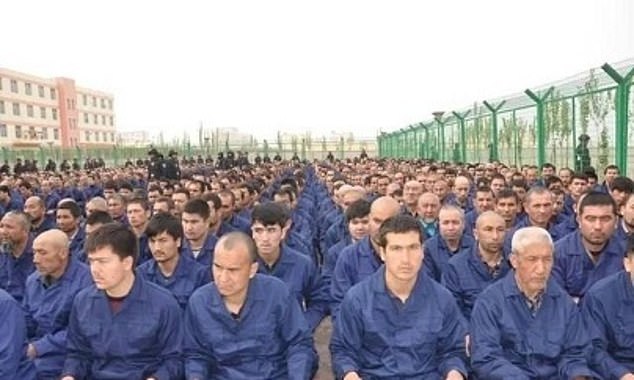 Ian Birrell: Those were the grotesque words of a regime that seems to have adopted George Orwell’s 1984 as a textbook for its twisted rule based on brutality, surveillance and the spreading of lies

This is a most significant moment. “Pretending ignorance is no longer an option – not acting now is willful complicity in genocide,” Rahima Mahmut, the UK director of the World Uyghur Congress, texted me shortly after the release.

Activists like Rahima and horror survivors have spent years trying to wake up the world to the atrocities, barbarism and cruelty being inflicted on their people by the Chinese government – and now it’s official.

As befits Beijing, it tried to block and harass Michelle Bachelet, the UN human rights commissioner who wrote the report. First she tried to control her visit to Xinjiang in May, then she used delaying tactics to prevent publication before finally dismissing her document as libel and sending this ridiculous letter.

In fact, few parts of our planet are more miserable than Xinjiang. For it has been turned into hell on earth by a repulsive communist dictatorship that seeks to destroy the culture, language, religion and traditions of its indigenous communities.

At least a million Uyghurs were sent to concentration camps, where they were brainwashed, drugged and tortured.

Ian Birrell: Now we have to crack down on the perpetrators

He sent his hand-picked henchman to oversee the proceedings. Chen Quanguo tested her tactics in Tibet, cracking down on the Buddhist religion and gentle traditions so harshly that it led to numerous self-immolations in protest.

Under her regime’s reign of terror in Xinjiang, it is a crime for citizens to study the scriptures, grow a beard, complain about poverty, or travel abroad.

Cameras, checkpoints and facial recognition technologies are placed everywhere. Entire villages were rounded up and sent to camps. Survivors speak of gang rape.

Thousands of mosques and shrines were destroyed. I covered the horrible stories of people being sent to the gulags for this newspaper. “When officers picked out the prettiest girls, you knew what was going to happen,” said a camp survivor.

And I’ve heard from families whose loved ones have disappeared, and firsthand the horrifying stories of women being sterilized and doctors trying to protect them. I will never forget the testimony I heard two years ago in Istanbul from a 30-year-old nurse, Zumret Abdullah, who worked in a maternity ward for three years, where she saw about 90 forced abortions. “I still have nightmares,” she said.

She told me that expectant mothers are tricked into swallowing pills to abort fetuses or, if they are five months pregnant, receive lethal injections in the head of their unborn child. A mother seven months pregnant pleaded for death after her baby was killed. Afterward, they threw the fetus into a plastic bag “like it was garbage.”

Last year, a former Chinese police officer wracked with guilt made a remarkable confession to the torture in Xinjiang, telling me how they used electric batons on prisoners’ genitals and tied people to special chairs for up to two weeks.

The Chinese claim to be fighting terrorism and are posting repulsive videos showing Uyghur women singing and dancing to prove their luck. It slanders those who dare challenge such propaganda. Beijing’s ethnic cleansing campaign began before the turn of the century, when Han Chinese poured into Xinjiang, conquering land and exploiting natural resources.

As in Tibet, party leaders sought to eliminate traditional cultures and break the hold of religion. A mother who found refuge in Sweden told me how she found out that her three-year-old son had his mouth taped shut in kindergarten to prevent him from speaking her language.

Xi stepped up repression after coming to power in 2012 — just as he has done throughout Chinese society to smash dissent, crush rival factions, force corporations to stick to the party line, and give civil society the least amount of space take.

After anti-government protests and attacks in Xinjiang, he ordered his acolytes to show no mercy. This led to the re-education camps, the forced labor programs and the most intrusive surveillance system in the world.

But the violations described in this UN report also affect the international community. For complacent politicians in democracies, along with governments of Muslim nations, are ignoring genocide to appease a rising superpower and gain a chunk of trade.

Western companies put profit before ethics to buy cotton and tomatoes grown in Xinjiang through forced labor — and even trade the hair shaved from the heads of female prisoners, such a sinister echo of past concentration camp atrocities.

We have seen that Xi’s brutal regime, which is becoming increasingly aggressive towards neighbors, cannot be trusted.

And it covered up the outbreak of Covid-19 in Wuhan, hampered efforts to stem an emerging pandemic, and then thwarted any attempts to probe its origins.

They were backed by politicians, media and scientists who ignored the coincidence that a deadly new virus had emerged in the city, which is the center of secret bat-coronavirus research and home to China’s top biosecurity laboratory.

Perhaps one day we will see clear words from the UN on this subject as well.

It is progress, however, for this contradictory and weak institution to find China guilty of the atrocities in Xinjiang – even if, unlike the US and British MPs, it shies away from accusing China of genocide.

Now we have to take tough action against the perpetrators.

There should be judicial accountability in a genocide investigation launched by the International Criminal Court in The Hague.

Democracies should ban China’s surveillance firms like Hikvision, purge supply chains of tainted goods or companies linked to forced labor, and impose sanctions on China’s political and corporate leaders, starting at the top.

Wu’er Kaixi, a Uyghur who led the Tiananmen Square protests in 1989, recently suggested to me that the West should follow its stance on Russia’s crimes in Ukraine and impose sanctions on China’s top 200 families, to stop their travels and rob them of their wealth.

Or do we just allow China’s evil dictatorship of Xi Jinping to continue spewing lies that it is spreading happiness in Xinjiang when the world knows beyond a doubt that it is committing some of the darkest crimes against humanity?