The ICU nurse who killed six people in a horrific fiery crash in LA earlier this month when she blew through a red light at 90mph suffered a ‘frightening’ mental collapse in the days leading up to the incident, it has been revealed.

The revelation concerning the murder charges currently leveled at Nicole Linton, 37, came in the form of a filing from the LA nurse’s defense attorneys, who insist their client suffered an ‘apparent lapse of consciousness’ at the time of the crash.

Obtained by The LA Times, the filing offers a detailed narrative of the suspect’s diminishing mental state in the buildup to the incident, which claimed the lives of a pregnant mother, her unborn child and one-year-old son, and four others.

Linton, who is from Texas, is currently in custody on the six murder charges, which pertain to the five people as well as the unborn child.

She is being held without bail, due to prosecutors belief that she is a flight risk and a danger to the community.

The filing argues that Linton has ‘no recollection of the events that led to her collision’ – and paints a picture of a mentally ill woman who has rapidly lost her sanity over the past four years.

In the document, Linton’s attorneys insist their client was diagnosed with bipolar disorder in 2018, and blame the suspect’s deteriorating mental state on her refusal to take her prescribed medication during the pandemic – after an online therapist told her she merely suffered from anxiety.

Her condition, they said, would then devolve to a ‘frightening’ point on the day of the August 4 crash, which saw her Facetime her sister completely naked just hours before carrying out the crime. 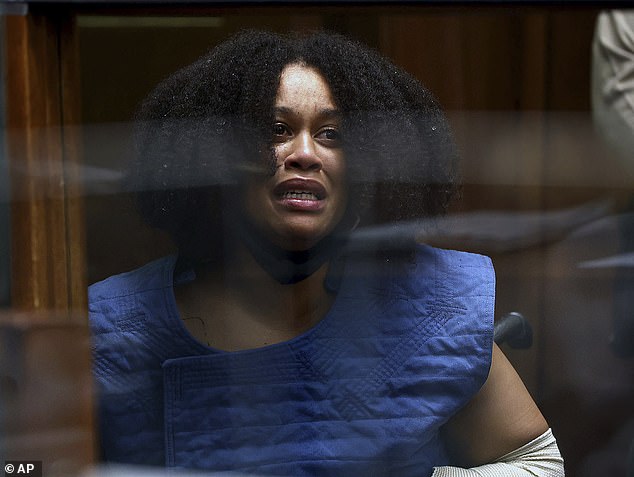 Nicole L. Linton, 37, (pictured in court) has been charged with six counts of murder and five counts of vehicular manslaughter

Linton’s family, her lawyers wrote, first became aware of her mental health issues in May 2018, when she was working as a nursing student at the University of Texas in her native Houston.

It was then, her sister Camille Linton claimed in a letter to the court included in the filing, that she suffered her first mental breakdown, while studying to become a nurse anesthetist.

‘The stress was too much for her and it “broke” her,’ Camille Linton wrote. ‘Thus beginning the journey of Nicole’s 4-year struggle with mental illness.’

According to Linton’s sister, the breakdown, which transpired in 2018, saw the suspect run out of her apartment in 2018 while allegedly suffering a panic attack.

When police approached her, the filing reads, Linton climbed atop one of the officers service vehicles, and was subsequently arrested for disorderly conduct.

Attorneys then wrote how Linton would go on call her family from the police station – however, instead of expressing concern for her situation, Linton inexplicably told relatives that she was worried about the well-being of her pet turtle.

A few days after that arrest, Linton would again contact her family to express unease after claiming she had been possessed by her dead grandmother.

The following day, the heavily redacted documents reveal, Linton was sent to Ben Taub psychiatric hospital, after requiring stitches for a head wound suffered after she banged her head into a glass partition while ranting about the police and Supreme Court.

It was then that Linton was hit with her bipolar diagnosis and prescribed psychiatric medication, the defense motion says, which she would continue to take for the next year.

Tabia Johnson, a witness to the crash, took a photo of the suspect, Nicole L. Linton (center), commenting that Linton only appeared to suffer minor injuries in the horrible crash

Linton can be seen here after the crash with blood on her left thigh and left forearm, she appears to be wearing hospital scrubs

An emergency medical worker directs Linton, who can be seen here sitting with a bloody arm

More than a year later, Linton was involuntarily committed to another psych ward – this time because a neighbor called her family after seeing Linton running around her apartment complex nude, the attorneys wrote.

Linton’s mental health soon devolved further, the filing alleges, after she stopped taking her prescribed bipolar medication during the early days of the pandemic.

The reasoning behind this decision, the lawyers wrote, was due to the fact an online therapist whom Linton had been speaking to remotely during COVID restrictions told her she was only suffering from anxiety.

At this point, early on in 2020 and carrying on into 2022, Linton’s behavior became ‘increasingly frightening,’ her attorneys alleged – to the point where she became inexplicably delusional and suspicious of both her family and coworkers.

The filing alleges that Linton – who continued to work at the West Los Angeles Medical Center as her health allegedly deteriorated – during this time would begin , not sleeping and becoming unreasonably obsessive about cleanliness.

Other strange episodes would see Linton go off onto nonsensical rants toward her family members, and accuse them of stealing from her, her lawyers said.

Linton’s Mercedes raced past a gas station then smashes into the side of a traffic jam, causing a flaming inferno in the Windsor Hills district of Los Angeles

This behavior would go on unchecked until the days just before the August 4 crash, when it grew increasingly more concerning, the filing reveals.

‘In the days and hours leading up to the events of August 4, Nicole’s behavior became increasingly frightening,’ wrote her attorneys.

They claimed that during this time Linton was in contact with her sister Camille, and had repeatedly insisted to her that her coworkers at the hospital were ‘acting weird.’

Attorneys for Nicole Linton, Halim Dhanidina and Jacqueline M. Sparagna, argued in the Aug 6 filing that the crash served as the culmination of a four year mental health spiral experienced by the suspect, who doctors wrote is bipolar. They allege she stopped taking her medication during the pandemic, further worsening her mental state

On the day of the crash, Linton drove home from the hospital for lunch and FaceTimed her sister, the court papers further allege.

However, the call itself served as a cause for alarm, with Linton carrying out the call completely nude, greatly troubling her sibling, who insisted the behavior was out of the ordinary.

Linton would then head back into work, but called her sister again at 1:24 pm – just minutes before the crash – to tell her was leaving work again.

Her reasoning behind this impromptu exit, the document alleges, was that  ‘She told her sister that she was flying out to meet her in Houston the next day so she could do her niece’s hair.’

Nathesia Lewis, was identified as one of the six victims in the fiery Los Angeles on August 4. Lewis was driving with Lynette Noble when the vehicle burst into flames after being slammed by ICU nurse, Nicole Linton

Lynette Noble, was identified as one of the six victims in the fiery Los Angeles on August 4. Noble and Lewis were driving together when ICU nurse Nicole Linton slammed into their car

Asherey Ryan (above), 23, died in the fiery crash with her one-year-old child and her unborn child. She was almost to her due date when she died

The father of the unborn child Reynold (right) also died in the crash. He is here with Asherey

During the call, Linton also bizarrely claimed that she was getting married – and that her sister ‘should meet her at the altar,’ the lawyers wrote.

After the crash, a doctor who treated Linton wrote that she had ‘no recollection of the events that led to her collision,’ upon analyzing her mental state upon arriving at Ronald Reagan UCLA Medical Center on August 6, two days after the incident.

‘The next thing she recalled was lying on the pavement and seeing that her car was on fire,’ he wrote.

The doctor would then discern Linton has bipolar disorder – and suffered an ‘apparent lapse of consciousness’ at the time of the crash, the filing reveals.

The extent of Linton’s injuries from the crash were not detailed in the report, but the aforementioned doctor wrote that she suffered ‘fractures’ as a result of the incident – despite initial reports indicating she only suffered minor injuries after crashing her Black Mercedes Benz into the five victims.

Linton’s lawyers added that the nurse is confined to a wheelchair in jail.

‘The medical records are an objective unbiased account of what happened here,’ Linton’s attorney Jacqueline Sparagna told The Times of the heavily redacted doctor diagnosis detailed in the filing.

Despite the disturbing behavior discussed in the document, Linton’s lawyers wrote that her mental health issues and ‘apparently bizarre’ actions are not enough reason to keep her incarcerated.

The requested Linton be released for testing at UCLA Resnick Neuropsychiatric Hospital, and that she be allowed to wear an ankle monitor and undergo house arrest, or adhere to any other stipulations specified by the court.

‘Ms. Linton would be most appropriately housed in a mental health treatment facility where she can be monitored and treated for her illness,’ attorneys Halim Dhanidina and Jacqueline Sparagna wrote.

Otherwise, they conceded, Linton should be released on a maximum bail of $300,000 bail, on the grounds that is all Linton could afford.

https://www.dailymail.co.uk/news/article-11162953/ICU-nurse-no-recollection-LA-crash-having-mental-collapse-killing-six.html?ns_mchannel=rss&ns_campaign=1490&ito=1490 ICU nurse has ‘no recollection’ of LA crash and was having ‘mental collapse’ before killing six