A supermarket owner has caught a face full of pepper spray before being threatened and racially abused after confronting two sisters over an alleged shoplifting.

Sarah Wang, owner of Ashfield IGA in Perth’s eastern suburbs, said the heated altercation began when she approached the two girls on Monday.

Ms. Wang was allegedly attacked and verbally abused by the two sisters, aged 13 and 14, after she and another staff member asked her to return items they were accused of stealing.

Western Australia Police allege the teenagers from Gosnells, south of Perth, tried to steal food, drink and toiletries by hiding them under their clothing before Ms Wang intervened.

Footage of the incident shows one of the sisters attempting to hit Ms. Wang while the other shot the shopkeeper with pepper spray. 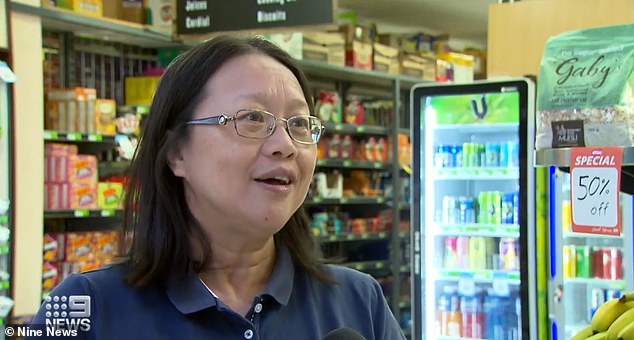 The owner of an IGA in East Perth, Sarah Wang (pictured), was threatened, pepper sprayed and racially abused after she was confronted with teenage shoplifting sisters on Monday

“I knew she was going to spray something, so I stepped back and held my breath, but I was still choking,” Ms Wang told WA Today.

The girls were escorted out of the store after the incident, but not before one of the teenagers allegedly shouted racial slurs at Ms. Wang, called her an “Asian mutt” and threatened that her store would be “smashed up”.

Ms. Wang claimed she had about three to four encounters with suspected shoplifters every day.

However, police have warned Ms. Wang that confronting the shoppers is not worth the risk to her safety.

“They come into the store like it’s their pantry,” she said.

The two sisters, aged 13 and 14, from nearby Gosnell, were charged with aggravated armed robbery and released on bail (pictured one of the youths trying to hit Ms Wang).

Both women were arrested on Tuesday and charged with aggravated armed robbery and appeared in Perth Children’s Court on Wednesday, where they were both released on bail.

The judge berated officers during the hearing for locking the sisters up overnight and claimed police had not done enough to contact a guardian.

“It is unacceptable that this happened, can the state please take care of it,” said Judge Alana Padmanabham.

Ms. Wang said she was worried about her safety.

“As she left, she said I’m going to break up your store, so of course I’m worried,” Ms Wang told 9News.

‘I don’t know, I wish the law or whatever could do something better.’