A 23-year-old worker who drowned in the Thames while being arrested by police has been pictured for the first time.

Liam Allan took to the water at Bill’s Restaurant on Riverside Walk in Kingston, south west London, just after 10.30pm on Friday.

His body was pulled from the water two hours later and pronounced dead after attempted CPR.

Police officers had previously been stopped on Kingston Bridge after an argument and allegations of theft.

The Independent Office of Police Conduct (IOPC) has now launched an investigation into the case. 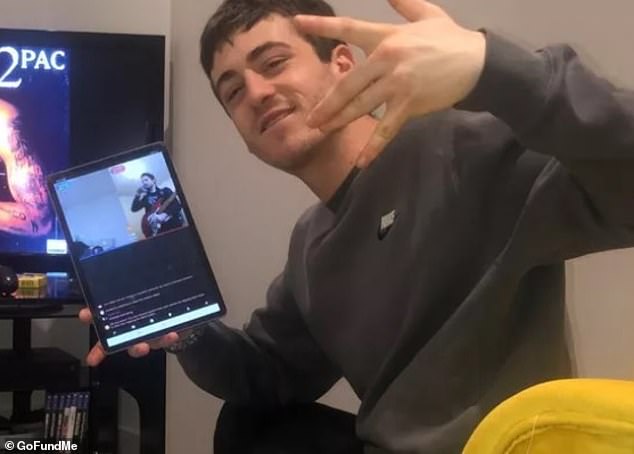 Liam Allan took to the water at Bill’s Restaurant on Riverside Walk in Kingston, south west London, just after 10.30pm on Friday

Mr Allan’s family told MyLondon he had been drinking but they believed he was “calm” while speaking to police.

Body-worn camera footage is being reviewed, and police say he was not handcuffed.

His father, James Allan, said: “I’m heartbroken. He was just so bubbly. He would talk to anyone. He would do anything for anyone.

“He was a good boy. He tried so hard… He had big dreams [of doing music] and from what I was told he was pretty good too.’

Mr. Allan, who worked as a temp in construction but wanted to be a rapper, is survived by his brother Tyler, 14, sister Jessica, 5, and a brother and two sisters on his mother’s side.

Tributes were also left by the Kingston scene for Mr Allan.

The IOPC said it had begun collecting and reviewing evidence, including footage of the officers’ interaction with Mr Allan.

It is already investigating the death of another man, Oladeji Adeyemi Omishore, 41, who jumped off Chelsea Bridge on June 4 after being tasered three times by police officers.

The full statement from the Met Police reads: “At around 10:30pm on Friday August 26, police on a routine patrol on the Kingston Bridge were pulled over to a verbal altercation involving a man and woman who knew each other were.

“A report of theft was filed. Officers were in the process of arresting the man, believed to be in his 20s, when he entered the water. He had not been handcuffed.

“An inter-agency response to locate the man has been launched involving the Met’s Marine Policing Unit, the National Police Air Service, the London Fire Brigade and the RNLI.

“The man was pulled out of the water around 12:30 a.m. and treated by paramedics. Despite their best efforts, he was pronounced dead. The man’s family has been informed.

“Police cordons remain in place and investigations are ongoing. The Met’s Directorate of Professional Standards has made a referral to the Independent Office for Police Conduct.’

The IOPC said it had begun collecting and reviewing evidence, including footage of the officers’ interaction with Mr Allan

Assistant Deputy Commissioner Laurence Taylor said: “My thoughts and those of the Metropolitan Police Service are with the friends and family of the man who sadly lost his life following this incident.

‘I fully appreciate that the public will be very concerned. Of course we share this concern. The Met’s Directorate of Professional Standards has made an immediate referral to the Independent Bureau of Police Conduct for every incident in which a person is harmed after contact with the police.

“We will fully support the investigations of the IOPC.”

A statement from the IOPC said: “IOPC investigators attended police proceedings following the incident to obtain initial reports from the officers involved.

“We have now begun collecting and reviewing evidence, including footage of the interaction between officers and the man.

“Our thoughts are with the man’s family and all those affected by his death.”

It comes after a 41-year-old man died in hospital earlier this year after jumping off a bridge into the River Thames after being tasered three times by police officers.

Oladeji Adeyemi Omishore, 41, of Pimlico was involved in a confrontation with Met police officers on Chelsea Bridge on June 4.

A shocking video showed the man, who appears to be holding an object in his right hand – reportedly a plastic and metal fire starter – yelling at two police officers.

One of the officers fires a taser and the man falls to the ground but keeps trying to get up, after which he is shocked a second time.

The 41-year-old, who was suffering from mental health issues, was rescued from the Thames but died in hospital the following day

He keeps trying to get up and is shocked a third time while officers yell at him to stay on the ground.

The man then jumps over one of the barriers to the edge of the bridge, pursued by a police officer before jumping over the railing and into the Thames below.

After falling off the bridge, a rescue operation was launched and he was rescued from the water by the RNLI.

He died in hospital the following day.

The Met referred the incident to the Independent Office for Police Conduct (IOPC), which has now launched an investigation.

Mr Omishore’s family said it was “incomprehensible” that the officers involved were not being investigated for professional misconduct or criminal charges, arguing that the Taser use “remained tantamount to an excessive use of force”.

An IOPC spokesman said: “Our thoughts and sympathy remain with the family and friends of Oladeji Omishore.

“Our investigation into the circumstances of his death is progressing well and our investigators continue to collect and analyze important evidence.

“At this early stage, we have no indication that any of the officers involved may have breached police professional standards or committed a criminal offense, although we keep conduct matters under constant review.

“We continue to be in touch with Mr. Omishore’s family to update them on our progress.”

https://www.dailymail.co.uk/news/article-11159603/PICTURED-Labourer-23-drowned-Thames-arrest.html?ns_mchannel=rss&ns_campaign=1490&ito=1490 Image: Laborer, 23, who drowned in the Thames during arrest

Can BBQ Food Really Be Good For You? We review the latest products that seem healthier