Sharon Osborne made a splash in her return to television screens in the new year as she discussed being ‘cancelled’ in America and revealed the name of her newborn grandson – as she unveiled a flawless face which left her looking years younger.

Osbourne, 70, has had extensive plastic surgery in the past and has been open about its successes and failures during her illustrious career in the music and television industries.

Appearing on This Morning on Monday, she discussed her return to the UK and being cancelled and ‘blacklisted’ in America, as she insisted: ‘I’ve never spoken with hate.’

She claims to have been forced out of The Talk following her public support of friend Piers Morgan’s comments about Meghan Markle in 2021 – which dismissed the idea Ms Markle had been suicidal and ultimately saw him leave Good Morning Britain. 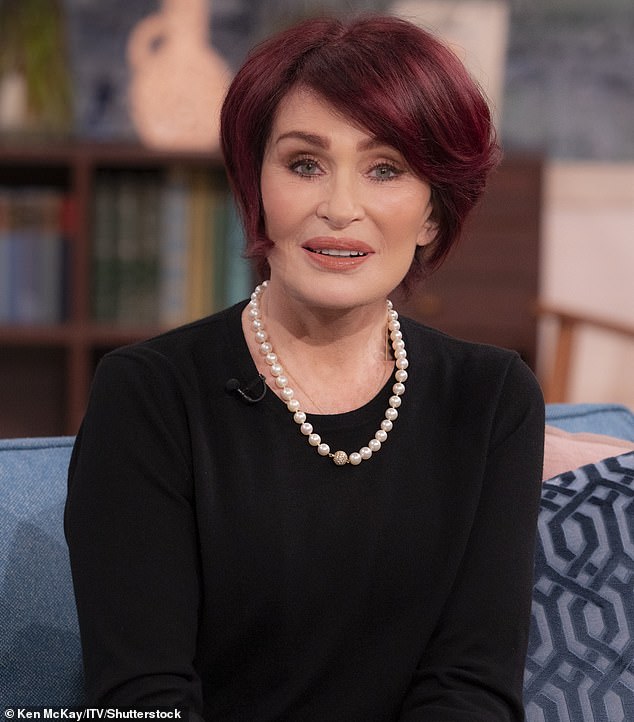 Viewers of This Morning on Monday were quick to wonder whether Sharon Osbourne, 70, had had further plastic surgery as she appeared glowing and years younger than in recent snaps

Osbourne, who says she has been working in showbusiness for 55 years, also sparked controversy within her own family last week after she revealed her baby grandson’s name to the world on Talk TV – apparently without her daughter’s consent.

Kelly Osbourne posted a stern statement last Wednesday after her mother not only confirmed she’d given birth, but also revealed the name of her newborn son to the world.

She had not officially confirmed the child’s arrival herself until Wednesday 5, when Sharon made the big reveal about her new grandson’s during an appearance on Talk TV.

The X Factor judge confessed that Kelly and DJ Sid had decided on the name Sydney for their little boy.

Although her return to the UK marks another twist in a highly varied career, viewers were quick to speculate that Ms Osbourne had had some more work done, leaving her looking years younger than in recent years. Here MailOnline reflects on all her looks throughout the years.

Prior to her entry onto the global stage, Osbourne was born in a suburb of London in 1952. Pictured in 1984, two years after marrying Black Sabbath singer Ozzy Osbourne

Sharon Osbourne was born on October 9, 1952 in Brixton, London. Her father, Don Arden, was a music manager who was responsible for Black Sabbath until his daughter took over.

She married singer and band frontman Ozzy Osbourne in 1982, and the couple have three children together.

Pictured in the early 1980s, Sharon’s look was a long way from her iconic red hair and modern style (by 2023’s standards).

Colour photos taken three years later in 1987 show the 35-year-old as almost unrecognisable from the fierce matriarch the world fell in love with on The X Factor.

Pictured with husband Ozzy dressed in what looks to be double denim, Sharon sports thick brown hair, styled on top of her head, and wears a long skirt and drop earrings.

By 1989, Osbourne’s personal style had already begun to emerge as she became a promising music manager

Two years later in 1989, a peek of the Sharon Osbourne from today can be seen. Her hair and suit certainly match what we expect from the TV personality today, and her flawless skin is a portent to the close attention she still pays to her appearance in 2023.

Sharon Osbourne’s preference for red has been clear throughout her career, even if not always in her hair

Osbourne arrives for VH1 Diva Duets: A Benefit Concert for the VH1 Save the Music Foundation at the MGM Grand Garden Arena in Las Vegas, Nevada, May 22, 2003

The early 2000s were a period when Osbourne began experimenting with her style, as fans saw a hair evolution from the looks of the 1980s and 1990s.

Although pictured with husband Ozzy with brown hair in 2000 while attending the ‘Little Nicky’ Film premiere in Los Angeles, just two years later her attraction to red hair was making its appearance.

Although it remained significantly darker than the bright shades which were to come, Sharon’s skin and facial care meant she looked younger at 48 than many people can dream of.

She sported various hairstyles, including a particularly spiky phase in 2003 when she attended the VH1 Save the Music Foundation benefit concert.

This coincided with the launch of The X Factor in 2004, with Osbourne judging the first four series before taking a break in 2008.

2005 saw a return to her roots in terms of her look, using her previous brown hair alongside cosmetic touch-ups which kept her ageing at bay

In 2005 Osbourne surprised the world with a return to her earlier hair colour – although her face retained its glowing youth.

With brown hair and blonde highlights, she styled it far more straight than her previous, and also later, looks.

Osbourne has always been open about the procedures she’s undergone over the years, which includes a gastric band, full facelift, tummy tuck, an eyelift, breast implants, abdominoplasty and botox.

Osbourne’s return to brown hair did not last long, and she had fully embraced her now signature colour by 2008.

On a brief return to The X Factor for season 9, she assisted judge Louis Walsh before becoming a judge and mentor on season 10 in 2013.

Osbourne’s look continued to evolve throughout this period as her pixie-cut hit its stride, with the cut set to stay with various tweaks for the long-term

In 2010, Osbourne announced she would be having her breast implants removed due to a leak

Osbourne’s look continued to evolve throughout this period as her pixie-cut hit its stride, with the cut set to stay with various tweaks for the long-term.

In 2011, she had to have her breast implants removed after one of them began leaking into the inner wall of her stomach.

She later described the feeling of the leaked implant as ‘a water bed laying on my chest.’

By 2012 she began to sport the brighter shades of hair that would last until 2020.

This was the heyday of Osbourne’s bright red do, which made her instantly recognisable on the many talk shows, music shows and red carpets she graced over the last decade.

By this time she was a regular presenter and contributor of US talk show The Talk, having been with the programme since its beginnings in 2010.

Her fashion continued to evolve with the times, although photos taken of the star grocery shopping in 2015 revealed a look far away from the polished presenter and music manager.

This was the heyday of Osbourne’s bright red do, which made her instantly recognisable around the world

Osbourne debuted her ‘new face’ in August 2016 when she returned to the judging panel of UK version of The X-Factor looking remarkably different (Pictured on Good Morning Britain, 2016)

As well as her regular spot on US talk show The Talk, Osbourne appeared on Loose Women in 2017 with a particularly bright hair colour

Osbourne has had a lot of cosmetic work done to retain her youthful looks, which have helped her appear decades younger than her actual age.

She famously debuted her ‘new face’ in August 2016 when she returned to the judging panel of UK version of The X-Factor looking remarkably different.

Speaking about her fourth facelift on Loose Women at the time, she said her cosmetic enhancements were just like ‘servicing a car.’

‘There is a new operation now where they cut you here,’ she said, while touching the area between her nose and her top lip.

In 2018 Osbourne cut a very elegant figure as she attended music premieres in the US, which became a second home for a long period up until 2021.

In a return to some of her earlier looks, Osbourne appeared almost ageless following her 2016 face lift.

Sharon Osbourne attends Lorraine Schwartz’s launch of The Eye Bangle, a new addition to her signature, 2018

In September 2019, the former X Factor star debuted the results of her fourth facelift as her show The Talk returned for it’s 10th season.

The star, who went under-the-knife five weeks before the show, confessed to the audience that she lifted ‘everything up’ to look ‘more refreshed.’

‘Everything was just lifted up so it looks more refreshed.’

And she was the living proof of the quote ‘beauty is pain,’ confessing that she was still experiencing ‘a little bit of pain’ especially under her chin.

‘You can’t complain when you wanted to do it,’ she offered, admitting she brought the discomfort onto herself.

But the star’s fresh look was almost unbelievable, with her hair also having somewhat of a restyle when she appeared on The Jonathon Ross Show that same year.

Osbourne’s last few years could be seen as somewhat bittersweet after she was ousted from her regular spot on The Talk following comments she made supporting her friend Piers Morgan.

She was critical of The Duke and Duchess of Sussex in March 2021 after the couple told Oprah Winfrey of Meghan’s struggle with suicidal thoughts and allegations of racism within the royal family.

The star’s look has remained consistent in recent years, but it has not been without sacrifice

In 2022, she revealed she had undergone a facelift the previous year which she felt had a ‘horrendous’ outcome

The star’s look has remained consistent in recent years, but it has not been without sacrifice.

In 2022, she revealed she had undergone a facelift the previous year which she felt had a ‘horrendous’ outcome.

‘I had a full facelift done in October and I looked like one of those f***** mummies that they wrap [with bandages].’

Sharon also shared that, when she revealed the results of the facelift to Ozzy, he offered to pay for her to have it redone, and said: ‘I don’t care how much it costs.’

But the star’s latest work appears to have gone far better than 2021’s disaster, with a look that is refreshed and more youthful than ever.

Osbourne may be 70, but she continues to keep fans questioning as she renews her style year after year.

https://www.dailymail.co.uk/tvshowbiz/article-11622907/IN-PICTURES-Sharon-Osbourne-ages.html?ns_mchannel=rss&ns_campaign=1490&ito=1490 IN PICTURES: Sharon Osbourne through the ages