An Indiana police officer who was shot days before her wedding had her life support turned off.

Officer Seara Burton, 28, was taken off life support on Thursday and is still fighting for her life as of Saturday morning, according to the Richmond Police Department.

“Despite the best efforts of all doctors and nurses at Miami Valley Hospital, Officer Seara Burton’s injuries have been determined to be irreparable,” the police department wrote.

“Seara will live on and continue to be a hero in her selfless gift of organ donation.”

Burton was just nine days from her wedding to Sierra Neal when she was shot in the head by Phillip Lee, 47, during a drug-related traffic stop on August 10.

Burton — Richmond’s first female K-9 officer — and her unit were called to the 200 block of North 12th Street after Richmond Police narcotics squad saw Lee pull up at a garage where authorities believed a drug deal was taking place .

According to WTHR, around 6:30 p.m., Burton and her K9 Brev performed an open-air sniff test on Lee and the moped he was driving.

The dog, reportedly alerted to narcotics, was present, and then Lee pulled a gun while speaking to officers, shooting multiple times and punching Burton. 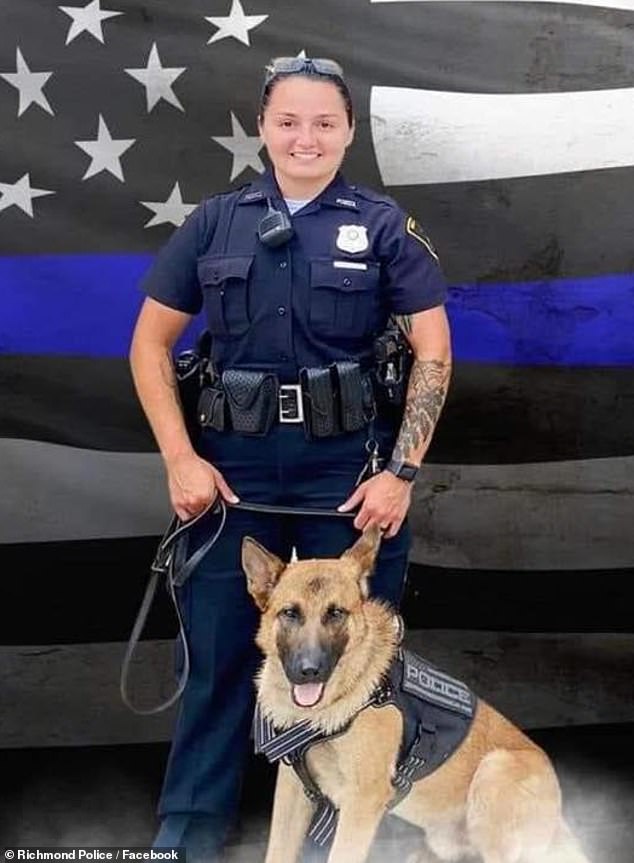 Officer Seara Burton, 28, was taken off life support on Thursday and is still fighting for her life as of Saturday morning, according to the Richmond Police Department

Phillip Lee, 47, was pulled over by the Richmond Narcotics Unit on August 10 when Brev was conducting an open-air sniff test and Lee drew a gun and fired multiple times, hitting Burton in the head. He has pleaded not guilty to all charges

Lee then fled on foot and officers shot and beat him, Fox 19 reported.

Burton, a four-year veteran of the force, was taken to a hospital before being flown to Dayton.

Lee was also taken to the hospital and appeared in court from his hospital bed on August 19 — the same day Burton was scheduled to get married. ‘

A day later, Burton’s fiancée posted a video on TikTok showing her walking through the hospital in her wedding dress to Burton’s room, where she is lying in her bed.

“This walk was supposed to be very different, but I’ll always be grateful we were still able to celebrate. Even though it’s not legal on paper, you are my wife,” Neal wrote on the social media app.

Law enforcement and hospital staff gathered for a walk of honor on Thursday when the officer with a flag over her body was wheeled out of her room as she wheeled into the operating room to become an organ donor.

Burton was scheduled to marry Sierra Neal (pictured in wedding dress) on August 19. Neal walked through the hospital in her wedding dress to see Burton that day

Brev led the way while saddened officers paid their respects in silence.

Brev is now under the care of one of the department’s investigators, who used to be a K9 handler.

Lee was charged with attempted murder, unlawful possession of a firearm by a felonious violent criminal, and drug offenses.

He pleaded not guilty and is being held on a $1.5 million bond.

https://www.dailymail.co.uk/news/article-11176919/IN-police-officer-28-shot-days-wedding-taken-life-support.html?ns_mchannel=rss&ns_campaign=1490&ito=1490 IN police officer, 28, who was shot dead days before her wedding, is taken off life support