An innocent black woman from Philadelphia has spent nearly a week in jail after being wrongly arrested for a crime she committed in Texas – despite never having been to the Lone Star State.

The incident began in May 2022 with a shoplifting at a sporting goods store in Webster, Texas, near Houston. Police identified the suspect as a woman named Julie Hudson.

The Philadelphia Hudson, unaware that she had been mistaken for the shoplifting allegation, soon found that she was repeatedly denied jobs and even had a criminal record. 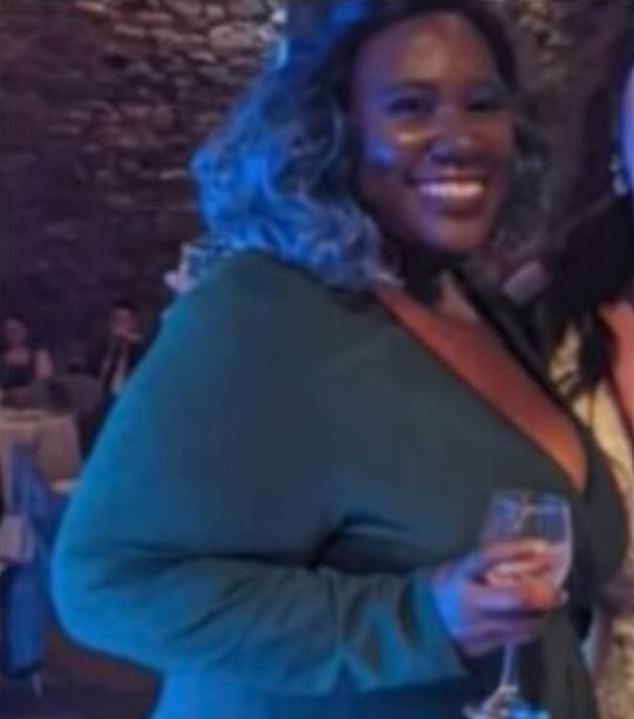 Julie Hudson, 31, of Philadelphia spent nearly a week in jail after being wrongly arrested on a mistaken identity charge for a crime in Texas

Police said this surveillance photo of the suspect, seen in Webster, Texas, resembled the Ph.D. Student Hudson, who also had the same name

When she visited a Philadelphia police station to find out why, she was arrested and held in custody for six days on January 5.

“When you know you haven’t done anything wrong, it makes you feel crazy,” Hudson told NBC 10.

“Everyone is sure that you did something, that you’re a criminal, but you know you’re not,” she added.

“When you know you haven’t done anything wrong, it makes you feel crazy,” Hudson said. “Everyone is sure you’ve done something, that you’re a criminal, but you know you’re not.”

Her family contacted law enforcement agencies in Texas and Philadelphia to try to get her released.

The Harris County District Attorney’s Office in Texas filed a motion to dismiss the charges against her, citing insufficient evidence.

“We are accepting charges based on the statutory evidence provided to us by law enforcement,” a spokesman for the Harris County Attorney’s Office wrote.

‘On Tuesday the Webster police notified the court of the error. We dropped the case within five minutes and immediately contacted the Philadelphia Police Department to release Ms. Hudson.’

Hudson is leaving prison after serving six days since Jan. 5

The Philadelphia Police Department has also released a statement explaining their actions.

“At the time, we immediately requested Ms. Hudson’s release from custody and are actively working with the Philadelphia Department of Prisons to process her release as quickly as possible.”

Hudson and her family are now considering legal action and are demanding answers to understand how the mistake happened – and to prevent it from happening to others.

“Julie happened to have family who could gather the information when we needed to raise the money,” Hudson’s sister, Charon Hudson, told NBC News. “So many people out there who don’t have that. And that struck a chord with me.

“Without the media and the press, no one would have taken the time to do what they are doing today,” Charon said.

While Hudson was finally released late Wednesday night, her family told NBC10 they have yet to clear the error from their record.

“Without the media and the press, no one would have taken the time to do what they are doing today,” said Hudson’s sister, Charon Hudson.

“I am not aware of any efforts by Texas authorities to contact my office directly regarding the misidentification of Ms. Hudson, which led to her arrest by Philadelphia police on January 6 under a fugitive warrant. When the District Attorney’s office independently learned that Webster police had confirmed to local media that they had wrongly sought against Ms. Hudson, we mobilized quickly to ensure Ms. Hudson was released from custody as quickly as possible.

“Julie Hudson is a Philadelphia resident with no criminal record and a Ph.D. What happened to her should not have happened and her family deserves great credit for successfully campaigning for her freedom in the Houston and Philadelphia media.”

Krasner apologized to Hudson and her family.

“As an institution, law enforcement owes you an apology,” Krasner said. “We should be able to not rely on relatives and rely on the media to run a notification process to get you out of jail six days later without your medication.

“At least we might have picked up the phone and said, ‘You did what?! Let me get that straight. Have you used social media to identify yourself?

“We are dismayed at the ordeal she and her family have endured due to a faulty warrant from another jurisdiction and grateful that she is now home,” he wrote.