Jacinda Ardern choked back tears as she announced her resignation as New Zealand Prime Minister in an emotional press conference.

Her resignation will take effect on Sunday, when the Labor Party can elect her successor, or on February 7 if the process has been dragged out.

Ms Ardern said she hopes to find the energy and heart to stay in the job over the Christmas break “but I couldn’t do it”.

‘I am human. Politicians are people. We give everything as long as we can – and then the time has come. And for me, it’s about time,” she said.

“I know what this job requires. And I know I don’t have enough left in the tank to do it justice. 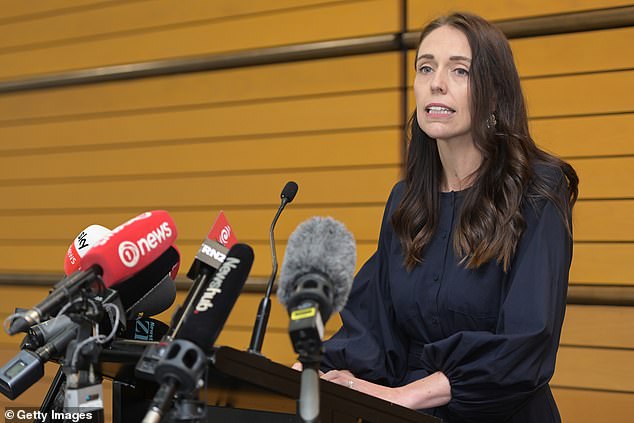 Ms Ardern is stepping down at just 42 after becoming leader on October 26, 2017, just over five years ago, and was New Zealand’s youngest-ever Prime Minister.

She insisted her party was lagging in the polls as the rival National Party had nothing to do with her decision to step down ahead of the upcoming election.

“But we need new shoulders for the challenges of this and the next three years.”

During her resignation speech, Ms Ardern announced that the next New Zealand general election would be held on October 14.

The retiring prime minister was asked if she would take up a role at the UN after leaving office and gave no clear answer.

Instead, she insisted she had “no plans” other than relaxing with her daughter Neve and marrying her fiancé Clarke Gayford after their wedding was canceled due to Covid restrictions.

Ms Ardern imposed some of the toughest Covid restrictions in the world, only allowing visitors in less than a year ago

Ms Ardern said she has yet to tell her daughter about her plans because “four-year-olds are talkative, I couldn’t take the risk”.

She said she left with no regrets and offered an easy way to remember.

“As someone who always tried to be friendly,” she said.

Australian Prime Minister Anthony Albanese expressed his admiration for his close ally and wished her well after politics.

“Jacinda Ardern showed the world how to lead with intellect and strength. She has shown that empathy and insight are powerful leadership qualities,” he said.

“Jacinda was a passionate advocate for New Zealand, an inspiration to so many and a great friend to me.”