Senator Jacinta Nampijinpa Price has slammed the Indigenous vote in Parliament as being pushed by bureaucratic “elites” and has claimed it will further divide all Australians.

During a Sky News Australia debate on Sunday, the Country Liberals Senator criticized the referendum, saying it did not prioritize Indigenous communities.

Senator Price has fiercely opposed the referendum, which she claimed started in the “wrong place” by labeling all First Nations people as disadvantaged.

“I firmly believe that you do not enhance a group of people by treating them differently than the others, you certainly do not favor them over the others.

“As far as I’m concerned, we are all Australians and should not be divided by race.”

“My argument has always been to serve the Australian people on the basis of need.”

Senator Price argued that the referendum offered no guarantee of solving indigenous issues as it followed bureaucratic models that “lived off their backs”. [Aboriginal community] Misery’.

“And again it’s … the most marginalized, uneducated, who have no idea what’s going on, so it’s the elites who are pushing this particular agenda,” Senator Price said.

“It is argued that this voice model is designed to give them a voice.

“So I don’t trust that this mechanism is about serving them and again it suggests that all tribal peoples are kind of marginalized and that doesn’t really solve our problems for us.” 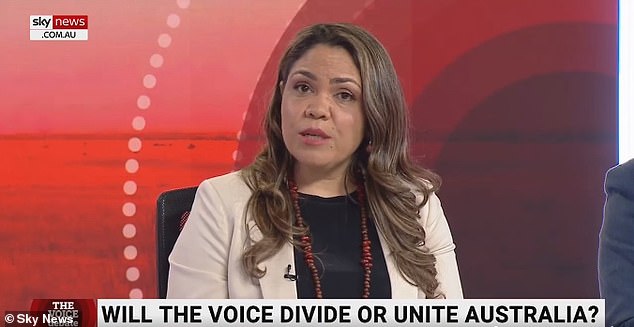 Country Liberals Senator Jacinta Nampijinpa Price (pictured) criticized the Voice referendum, claiming it gives no priority to Indigenous communities because it automatically assumes that all First Nation people are disadvantaged

In a landmark 2017 document, indigenous leaders from across the country lobbied for recognition of the constitution and called for the government to hold a referendum.

The voice of Parliament would establish a permanent constitutional body representing Indigenous and Torres Strait Islander people and advise the government on Indigenous affairs.

From the Heart director Dean Parkin and constitutional lawyer Dr. Shireen Morris, also on the panel, supported the voice, arguing that the panel would greatly improve life in First Nation communities.

Mr Parkin argued that “better outcomes” would be achieved if Indigenous Australians had a “direct say” on issues relevant to their community.

“If we want to see these real changes in communities on the ground, we can’t just do what we’ve been doing year after year,” Mr Parkin said during the debate.

Senator Price (pictured) argued the referendum offered no guarantee of solving problems faced by Indigenous communities and was inherently problematic as it followed bureaucratic models that “lived off their backs”. [Aboriginal communities’] Misery’

dr Morris, who authored a book on constitutional recognition of First Nations people called Radical Heart, argued that a guaranteed advisory board would produce “practical results and better results” for First Nation people.

“I believe that if indigenous peoples have a constitutionally guaranteed consultative voice so that communities can design solutions together with government, we will be better able to achieve practical results and better outcomes,” said Dr. Morris.

On election night, the Labor government announced that there would be a referendum in Anthony Albanese’s first term as Prime Minister.

The former NBA star was supposed to pledge his support for the referendum but instead delivered a few vague platitudes and left quickly.

He turned and left the room within 10 seconds of arriving, pausing only to remind the PM that he had to “give him that clearance too” to take home the boomerangs he had previously received had been presented.

The Prime Minister insisted that meeting the basketball star was a great success, later telling the media: “It was a very positive conversation. He is interested in this country, his second visit to Australia.

In a scathing newsletter, Ms Price said Albanians couldn’t tell the difference between a multimillionaire African-American basketball player and Aboriginal Australians. She ended the newsletter with an afterthought, followed by the famous “surprised Shaq” meme (pictured).

In a Sept. 2 newsletter, Senator Price rebuked Mr Albanese for “dragging out an African-American multi-millionaire” instead of listening to the voices of the Indigenous people already in Parliament.

“Albo couldn’t resist the opportunity to do press with a celebrity like O’Neal,” Senator Price wrote.

“In his tiny mind, he probably couldn’t tell the difference between a multi-millionaire African American basketball player and Aboriginal Australians living in remote and rural Australia.

“Indigenous Australians have their own voices, they are numerous and diverse and you should start listening to them.”

Ms Price has openly criticized the government’s indigenous policies. In her first speech to Parliament, she wore a traditional headdress (pictured) and demonstrated against what she called “handouts” and “symbolic recognition” for Indigenous Australians

The newsletter ended with a postscript, followed by the famous “surprised Shaq” meme.

“PS When you realize you were just used to enacting segregation in another country’s constitution,” Senator Price wrote.

Senator Price, the former deputy mayor of Alice Springs, has openly criticized the government and in her first speech to Parliament on July 27, she spoke out against what she called “handouts” and “symbolic recognition” for Indigenous Australians.