Jamie Raskin said Sunday that the House Select Committee should have a full report on the Jan. 6 inquiry into the Capitol riots by the end of the year.

He also insisted that Ginni Thomas, the wife of Conservative Supreme Court Justice Clarence Thomas, has “relevant testimony” and should come forward to share with the committee.

The panel aims to complete its investigation ahead of Midterms 2022 in November and report on its findings before the new Congress is sworn in next January.

Following the conclusion of a series of televised prime-time hearings this summer, the panel announced further hearings in September. No announcements were made about upcoming hearings and whether they will be released like the last round in June and July.

The rush to complete the investigation comes amid predictions of a Republican midterm election bloodbath. 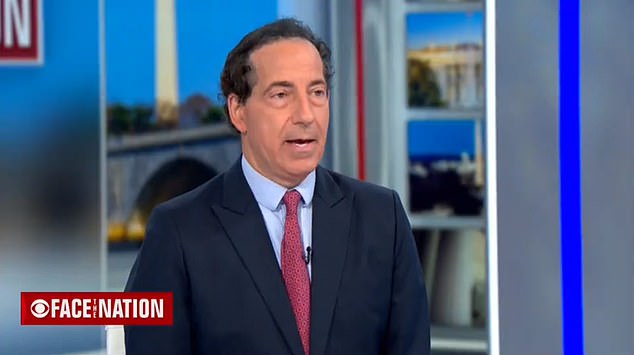 Representative Jamie Raskin said the Jan. 6 select committee would issue a report “by the end of the year.”

Jan. 6 committee member Rep. Jamie Raskin said the committee would release the full report on the investigation into the attack on the US Capitol “certainly by the end of the year.” pic.twitter.com/3RPj0ESsQe

While it’s no longer viewed as a shoe-maker for the Senate to turn red, Democrats are still widely seen as in danger of losing their majority in the House of Representatives.

Raskin said people should expect a full report on the committee’s findings “certainly by the end of the year.”

“We’re like Cinderella — at midnight our license expires through the end of the year,” he told CBS Face the Nation Sunday morning.

He went on to explain: “Under House Resolution 503 – this is an integral part of our responsibility. Telling the American people how to prevent future coups, riots, political violence and attacks on our political process.’

Raskin is one of the panel’s nine members — including two Republicans selected by House Speaker Nancy Pelosi, Rep. Liz Cheney of Wyoming and Rep. Adam Kinzinger of Illinois.

Both GOP members of the select committee will be retiring from Congress next January.

Cheney was rebuked by Republicans in her home state and lost the primary to keep her seat in the Wyoming House of Representatives. She was ousted by Trump-backed Harriet Hageman, who is almost certain to win November’s general election.

Trump has made it his mission to oust Republican lawmakers who voted to impeach him over the Jan. 6 Capitol riots.

Raskin also said that Ginni Thomas, wife of Conservative Supreme Court Justice Clarence Thomas, has “relevant statements” that should be shared with the panel

“She has a relevant statement to make and she should come forward and make it,” Assemblyman Jamie Raskin said Jan. 6 of Ginni Thomas, wife of Supreme Court Justice Clarence Thomas. pic.twitter.com/NrXYqTPQn9

The goal of the Jan. 6 special committee is to prove Trump’s guilt in last year’s attack — and prevent him from becoming president again.

The former president has not yet announced whether he will seek a non-consecutive second term in 2024, but has made strong hints he will. Some reports suggest he could make the announcement as early as this month.

Pence, Trump’s former No. 2, has indicated he would be willing to stick by the January 6 committee – and former members of his VP office have already spoken to the panel.

The statement by Ginni Thomas is also in the focus of the committee.

“We are interested in getting testimonies from anyone who has relevant evidence of an attempt to overturn the 2020 election,” Raksin told CBS on Sunday.

“She has relevant statements to make and she should come forward and make them,” he added. “I don’t want to overstate her role, we spoke to more than 1,000 people.”

Revelations came this week that further suggest Thomas was somehow implicated in the Jan. 6 riot in the Capitol — including email conversations she had with people in Wisconsin about the issue.

Jacinta Price criticizes the Voice referendum, which labels all indigenous peoples as disadvantaged

When will the Valorant Champions Phantom leave the store?