Donald Trump’s former senior advisor and son-in-law Jared Kushner enjoyed a day out boating with Ivanka and the couple’s children in Miami on Sunday.

It’s another public appearance for Kushner as he continues his road to recovery following his second surgery for thyroid cancer.

While enjoying the sunshine on the water, Kushner could be seen sporting a bandage on his throat. The author of Breaking History, dressed down for the day with a sky blue t-shirt and a pair of bright yellow shorts, with dark sunglasses and a baseball hat.

Ivanka meanwhile sported a spaghetti strapped low-cut patterned shirt with a pair of white shorts, switching between a wide brimmed sun hat and a baseball cap. The ex-president’s favorite daughter spent some of her time at the front of the boat with their three children, Arabella, Joseph and Theodore.

At one stage during the couple’s day out with the family, the kids played in an inflatable donut that was dragged behind the boat.

The couple lives in Miami in the plush Arte Surfside apartment building.

Kushner’s second surgery for thyroid cancer has been deemed a success while the rollout continues for his White House memoir.

In a September interview with The National Desk, Kushner confirmed the surgery saying: ‘I had the surgery last week. It was very successful.’

He went on: ‘That’s why I am a little bit higher up than I normally am,’ referring to why he was wearing a shirt and a jacket fastened up over his neck.

The family was all smiles as they as the soaked up the sun on the Labor Day holiday weekend. 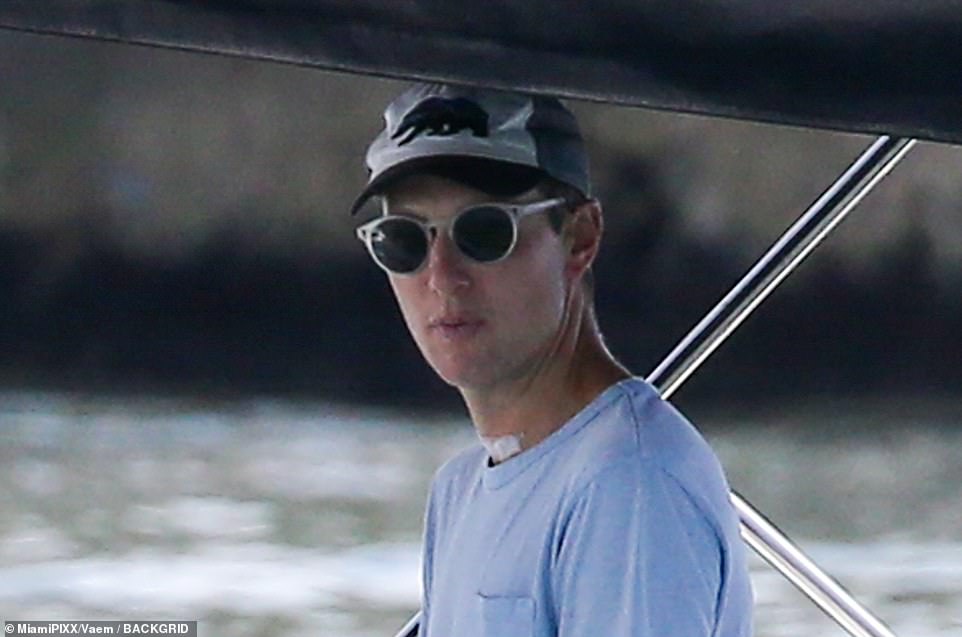 Jared Kushner, 41, shown sporting a bandage, less than a month after he underwent successful thyroid surgery at the Mayo Clinic

In a September interview with The National Desk, Kushner confirmed the surgery saying: ‘I had the surgery last week. It was very successful

During their trip on the water, the family was accompanied by their children’s friend and two other crewmembers

The pair have been busy and a bit more public than after they moved to the Sunshine State following the end of Donald Trump’s presidency, which both worked under.

Ivanka was last spotted Wednesday afternoon fighting back tears as she took an emotional phone call on her way to the gym.

The former White House senior adviser hid her eyes behind a pair of gold-frame aviator sunglasses, but she appeared to be crying — or close to it — while holding her cellphone up to her ear.

It’s likely been a difficult few months for Ivanka, whose husband, Jared Kushner, had second surgery a week ago to treat an apparent recurrence of thyroid cancer, which was said to be a success.

Ivanka sported a spaghetti strapped low-cut patterned shirt with a pair of white shorts, switching between a wide brimmed sun hat and a baseball cap

Kushner shown behind the wheel of the boat. He’s been very busy lately appearing on multiple broadcasts to promote his memoir Breaking History

At the time of Kushner’s visit to the Mayo Clinic, a source told DailyMail.com that the couple ‘were in Minnesota for Jared to have a scheduled check up at the Mayo Clinic, not exactly a romantic date night by any stretch of the imagination’

It’s been a stressful summer for Ivanka, in July her mother was found ‘unconscious and unresponsive’ at the bottom of the staircase in her Upper East Side townhouse. Her housekeeper found her as she arrived for work and called 911.

As soon as the family got out on to the open water, the couple’s sons and a friend were placed in an inflatable donut and taken for a joyride

In this pic, Ivanka appears to be telling her sons to hold on tight before the boat takes off

At the time of writing, Ivanka has made no public statement on the FBI’s raid of her father’s home in Mar-a-Lago

The couple enjoyed the water with their three children, Arabella, Joseph and Theodore

Three weeks ago, Jared and Ivanka were seen visiting the Mayo Clinic in Rochester, Minnesota, where he was being treated for the disease.

A source told DailyMail.com: ‘They were in Minnesota for Jared to have a scheduled check up at the Mayo Clinic, not exactly a romantic date night by any stretch of the imagination.’

‘Jared has to travel there periodically for monitoring and testing to ensure his thyroid cancer hasn’t returned. Ivanka obviously travelled with him to offer support as his wife.’

It came hours after it emerged the FBI had raided Donald Trump’s Mar-a-Lago mansion as part of a probe into whether he took classified records from the White House to his home.

His latest surgery comes after he publicly revealed his treatment for the first time in his new book, ‘Breaking History: A White House Memoir.’

Jared wrote that he had a similar surgery for thyroid cancer in 2019 while serving as President Donald Trump’s senior White House adviser.

In addition to the stress of her husband’s treatment, Ivanka is also grieving the loss of her mother.

Ivana Trump, 73, was found ‘unconscious and unresponsive’ at the bottom of the staircase in her Upper East Side townhouse on July 14 around 12:30 p.m. Her housekeeper found her as she arrived for work and called 911.

A medical examiner determined that she died from blunt impact injuries as a result of a fall, according to TMZ.

Ivanka’s father was seen comforting her at her mother’s funeral, the first time that they had been seen together in seven months since their public falling out over the 2020 presidential election.

While promoting his memoir, Kushner said in an August interview, when asked about how he fills his days since his father-in-law lost his reelection campaign in 2020, Kushner said that he spends most of his time with his wife Ivanka and their three children.

However, he added: ‘From the last year, the one thing I’ve tried to put a priority on since I left the White House was, you know, getting some exercise in.’

Kushner continued: ‘I think that there is a good probability that my generation is, hopefully with the advances in science, either the first generation to live forever, or the last generation that’s going to die.’

He concluded: ‘So, we need to keep ourselves in pretty good shape.’

In midst of promoting his new book, Kushner was coy about his father-in-law running for president again in 2024 saying: ‘With Trump it’s hard to rule anything out, he’s a very flexible thing’

In August, Kushner and Ivanka were pictured walking together in Miami, in those photos, Ivanka could bee seen wearing a string bracelet.

Ivanka hasn’t spoken about the purpose of the bracelet, but it does bear a resemblance to the type of red string that Kabbalah practitioners wear to ward off the ‘evil eye.’

Earlier this week, Kushner, in an interview with Sky News, said that his father-in-law had asked him about running for president again.

Kushner said that he would ‘rather not go into’ what the former president had asked him, but added: ‘Basically, I know that he’s obviously thinking about it. He hates seeing what’s happening in the country.’

He brazenly claimed, without providing evidence, that if Trump was president now, instead of Joe Biden, Russia’s invasion of Ukraine ‘never would have happened’.

When asked when Trump might make a decision on running for president again, Kushner said: ‘Nobody can speak for him.’

Asked again if Trump was not ruling out a presidential bid for 2024, Kushner added: ‘With Trump it’s hard to rule anything out, he’s a very flexible thing.’

Kushner also dismissed the importance of the FBI raid on Trump’s Mar-a-Lago residence, which found more than 100 classified documents in the Florida home, as ‘an issue of paperwork.’

He said: ‘I think it’s something that, again, this seems like it’s an issue of paperwork that should have been able to be worked out between the DOJ [Department of Justice] and Trump.

‘I don’t know what he took or what he didn’t take, but I think right now we’re relying on leaks to the media.’

In August, Kushner and Ivanka were pictured walking together in Miami, in those photos, Ivanka could bee seen wearing a string bracelet

Ivanka hasn’t spoken about the purpose of the bracelet, but it does bear a resemblance to the type of red string that Kabbalah practitioners wear to ward off the ‘evil eye.’

In the same interview, Kushner revealed that he had asked Donald Trump for his daughter Ivanka’s hand in marriage – only for the former president to tell her before he had the chance to propose.

Kushner said that Trump could not keep it a secret from Ivanka that his now son-in-law was going to propose.

Kushner admitted that he did not find out until after Ivanka, 40, said yes to him that Trump had spoiled the surprise.

‘I didn’t find that out until later,’ Kushner said in the interview, adding that he recalls the night he proposed vividly.

Ivanka and Kushner married at the Trump National Golf Club in 2009 in Bedminster, New Jersey.

Kushner’s memoir details furious accusations from inside the Trump White House over leaking and Bannon’s threat to ‘break you in half’ if the president’s son-in-law went against him.

But it culminates with Kushner telling the president he didn’t oppose a presidential pardon for Bannon, who had been charged with a fraud scheme related to an effort to raise private funds to build border wall.

‘Steve was incredibly destructive to your first year in office, but he was there for you on the first campaign when few were,’ Kushner told the president, he writes.

In his book, Kushner labels Bannon a ‘toxic’ presence in the White House.

https://www.dailymail.co.uk/news/article-11179731/Jared-Kushner-sports-bandage-neck-second-surgery-thyroid-cancer.html?ns_mchannel=rss&ns_campaign=1490&ito=1490 Jared Kushner sports a bandage on his neck after a second surgery for thyroid cancer

Nick Kyrgios wins a thrilling first-set tiebreak at the US Open against No. 1 seed Daniil Medvedev